From Infogalactic: the planetary knowledge core
(Redirected from Fes, Morocco)
Jump to: navigation, search
For other uses, see FES (disambiguation) and Fez.

Panoramic view of the Old Medina 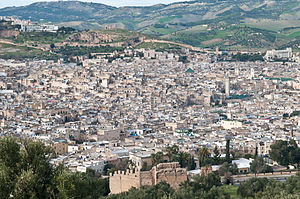 View of the old medina of Fez

Fez was the capital city of modern Morocco until 1925 and is now the capital of the Fès-Meknès administrative region. The city has two old medina quarters, the larger of which is Fes el Bali. It is listed as a World Heritage Site and is believed to be one of the world's largest urban pedestrian zones (car-free areas).[3] University of Al Quaraouiyine, founded in 859, is the oldest continuously functioning university in the world. The city has been called the "Mecca of the West" and the "Athens of Africa".[4]

The Middle Atlas mountains near the Fez city is called "Fazaz", and a small town west from Meknes is called Ait Fazzaz.

The Arabic word فأس Faʾs means pickaxe, which legends say Idris I of Morocco used when he created the lines of the city. One noticeable thing was that the pickaxe was made from silver and gold.[5]

During the rule of the Idrisid dynasty, Fez consisted of two cities: Fas Elbali, founded by Idris I[citation needed], and al-ʿĀliyá, founded by his son, Idris II. During Idrisid rule the capital city was known as al-ʿĀliyá, with the name Fas being reserved for the separate site on the other side of the river; no Idrisid coins have been found with the name Fez, only al-ʿĀliyá and al-ʿĀliyá Madinat Idris. It is not known whether the name al-ʿĀliyá ever referred to both urban areas. It wasn't until 1070 that the two agglomerations were united and the name Fas was used for the combined site.[6]

Foundation and the Idrisids

The city was founded on a bank of the Jawhar river by Idris I in 789, founder of the Zaydi Shi'i Idrisid dynasty. His son, Idris II (808),[7] built a settlement on the opposing river bank. These settlements would soon develop into two walled and largely autonomous sites, often in conflict with one another: Madinat Fas and Al-'Aliya. In 808 Al-'Aliya replaced Walili as the capital of the Idrisids.

Arab emigration to Fez, including 800 Andalusi families of Berber descent[8] in 817–818 expelled after a rebellion against the Umayyads of Córdoba, Andalusia, and 2000 Arab families banned from Kairouan (modern Tunisia) after another rebellion in 824, gave the city a more Arabic character than others of the region. The Andalusians settled in what is called the 'Old' Fez, while the Tunisians found their home in the 'New' Fez, also called al-'Aliya. These two waves of immigrants would subsequently give their name to the sites 'Adwat Al-Andalus and 'Adwat al-Qarawiyyin.[9] The majority of the population was of Arab descent, and the minority was of North-African Berber descent, with rural Berbers from the surrounding countryside settling there throughout this early period, mainly in Madinat Fas (the Andalusian quarter) and later in Fes Jdid.[10]

Upon the death of Idris II in 828, the dynasty’s territory was divided among his sons. The eldest, Muhammad, received Fez. The newly fragmented Idrisid power would never again be reunified. During Yahya ibn Muhammad's rule in Fez the Kairouyine mosque, one of the oldest and largest in Africa, was built and its associated University of Al Quaraouiyine was founded (859).[11] Comparatively little is known about Idrisid Fez, owing to the lack of comprehensive historical narratives and that little has survived of the architecture and infrastructure of early Fez (Al-'Aliya). The sources that mention Idrisid Fez, describe a rather rural one, not having the cultural sophistication of the important cities of Al-Andalus and Ifriqiya.

In the 10th century the city was contested by the Caliphate of Córdoba and the Fatimid Caliphate of Tunisia, who ruled the city through a host of Zenata clients. The Fatimids took the city in 927 and expelled the Idrissids, after which their Miknasa were installed there. The Miknasa were driven out of Fez in 980 by the Maghrawa, their fellow Zenata, allies of the Caliphate of Córdoba. It was in this period that the great Andalusian ruler Almanzor commissioned the Maghrawa to rebuild and refurnish the Al-Kairouan mosque, giving it much of its current appearance. According to the Rawd al-Qirtas and other Marinid era sources, the Maghrawi emir Dunas Al-Maghrawi filled up the open spaces between the two medinas and the banks of the river, dividing them with new constructions. Thus, the two cities grew into each other, being now only separated by their walls and the river. His sons fortified the city to a great extent. This could not keep the Almoravid emir Ibn Tashfin from conquering it in 1070, after more than a decade of battling the Zenata warriors in the area and constant besieging of the city.

In 1033, several thousand Jews were killed in the Fez Massacre.

Golden age and the Marinid period

Madinat Fas and Al-'Aliya were united in 1070 by the Almoravid dynasty: The walls dividing them were destroyed, bridges connecting them were built, and connecting walls were constructed that unified the medinas. Under Almoravid patronage the largest expansion and renovation of the Great Mosque of Kairouan took place (1134-1143). Although the capital was moved to Marrakesh and Tlemcen under the Almoravids, Fez acquired a reputation for Maliki legal scholarship and became an important centre of trade. Almoravid impact on the city's structure was such that the second Almoravid ruler, Yusuf ibn Tashfin, is often considered to be the second founder of Fez.[12]

Like many Moroccan cities, Fez was greatly enlarged during the Almohad Caliphate and saw its previously dominating rural aspect lessen. This was accomplished partly by the settling there of Andalusians and the further improvement of the infrastructure. At the start of the 13th century they broke down the Idrisid city walls and constructed new ones, which covered a much wider space. These Almohad walls exist to this day as the outline of Fes el Bali. Under Almohad rule the city grew to become the largest in the world between 1170 and 1180, with an estimated 200.000 people living there.[13] 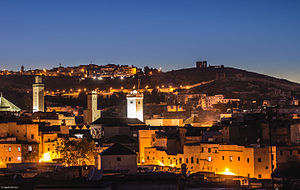 Long exposure of the old Medina

In 1250 Fez regained its capital status under the Marinid dynasty. In 1276 after a massacre by the population to kill all Jews that was stopped by intervention of the Emir,[14] they founded Fes Jdid, which they made their administrative and military centre. Fez reached its golden age in the Marinid period, which marked the beginning of its official, historical narrative.[15][16] It is from the Marinid period that Fez's reputation as an important intellectual centre largely dates.[17] They established the first madrasas in the city and country.[18][19] The principal monuments in the medina, the residences and public buildings, date from the Marinid period.[20] The madrasas are a hallmark of Marinid architecture, with its striking blending of Andalusian and Almohad traditions. Between 1271 and 1357 seven madrassas were built in Fez, the style of which has come to be typical of Fassi architecture.

The Jewish quarter of Fez, the Mellah was built in 1438, near the royal residence in Fez Jdid. The Mellah at first consisted of Jews from Fez el Bali and soon saw the arrival of Berber Jews from the Atlas range and Jewish immigrants from al-Andalus. The Marinids spread the cult of Idris I and encouraged sharifism, financing sharifian families as a way to legitimize their (in essence secular) rule: From the 14th century onwards hundreds of families throughout Morocco claimed descent from Idris I, especially in Fez and the Rif mountains. In this regard they can be seen as the enablers of the latter sharifian dynasties of Morocco. The 1465 Moroccan revolt in 1465 overthrew the last Maranid sultan. In 1474 the Marinids were replaced by their relatives of the Wattasid dynasty, who faithfully (but for a large part unsuccessfully) continued Marinid policies.[21]

In the early modern period, the Ottoman Empire came close to Fez after the conquest of Oujda in the 16th century. In 1554, the Wattasid dynasty took Fez with the support of the Turks, and the city became a vassal of the Ottomans, who finally conquered it in 1579 under sultan Murad III.[22]

The Ottoman power in North Africa focused on threats posed by Habsburg Spain and the Kingdom of Portugal. As a result, Fez was not under pressure from the Ottoman rulers. The conquest of Fez was the catalyst for the move of the capital city of the Saadi dynasty to Marrakesh. Early in the 17th century the town returned to Moroccan control under Ahmad al-Mansur.[23]

After the fall of the Saadi dynasty (1649), Fez was a major trading post of the Barbary Coast of North Africa. Until the 19th century it was the only source of fezzes (also known as the tarboosh). Then manufacturing began in France and Turkey as well. Originally, the dye for the hats came from a berry that was grown outside the city, known as the Turkish kızılcık or Greek akenia (Cornus mas). Fez was also the end of a north-south gold trading route from Timbuktu. Fez was a prime manufacturing location for embroidery and leather goods such as the Adarga. 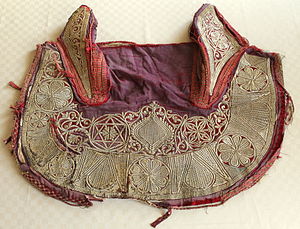 Following the implementation of the Treaty of Fez, the city was heavily damaged in the 1912 Fez riots.[24]

Fez was the capital of Morocco until 1925. Rabat remained the capital even when Morocco achieved independence in 1956.

Despite its traditional character, there is a modern section: the Ville Nouvelle or "New City". Today it is a bustling commercial center. The popularity of the Fez has increased since the King of Morocco took a computer engineer from Fez, Salma Bennani, as his wife.

Place Lalla Yeddouna at the heart of the Medina is currently undergoing reconstruction and preservation measures following a design competition sponsored by the Millennium Challenge Corporation (Washington D.C.)[25] and the Government of the Morocco. The construction projects scheduled for completion in 2016 encompass historic preservation of particular buildings, construction of new buildings that fit into the existing urban fabric and regeneration of the riverfront. The intention is to not only preserve the quality and characteristics of the UNESCO World Heritage Site, but to encourage the development of the area as a sustainable, mixed-use area for artisanal industries and local residents.

Located by the Atlas Mountains, Fez has a Mediterranean climate with a strong continental influence, shifting from cold and rain in the winter to dry and hot days in the summer months between June and September. Rainfall can reach up to 600 mm (24 in) per year. The winter highs typically reach only 15 °C (59 °F) in December–January. The highest and lowest temperatures ever recorded in the city are 46.7 °C (116 °F) and −8.2 °C (17 °F), respectively.(see weather-table below). Fez's climate is strongly similar to the one you find in Seville and Córdoba, Andalusia, Spain. Snowfall on average occurs once every 5 years.[26][27][28][29]

The prefecture is divided administratively into the following:[31] 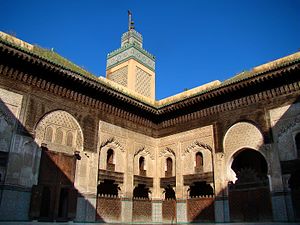 The Bou Inania Madrasa built by the Marinid sultan Abu Inan Faris in 1351.

Fez is becoming an increasingly popular tourist destination and many non-Moroccans are now restoring traditional houses (riads and dars) as second homes in the Fez medina. The most important monuments in the city are: 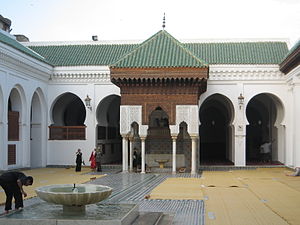 The University of Al Quaraouiyine (Arabic Jāmiʿat al-Qarawiyyin Arabic: جامعة القرويين‎‎) is the oldest continually-operating university in the world.[32] The al-Karaouine mosque was founded by Fatima al-Fihri in 859 with an associated school, or madrasa, which subsequently became one of the leading spiritual and educational centers of the historic Muslim world.[33] It became a state university in 1963, and remains an important institution of learning today.[34]

The city is served by Saïss Airport. It also has an ONCF train station with lines east to Oujda and west to Tangier and Casablanca.[35]

Fez has two football teams, MAS Fez (Fés Maghrebi) and Wydad de Fès (WAF). They both play in the Botola the highest tier of the Moroccan football system and play their home matches at the 45,000 seat Complexe Sportif de Fès stadium.

Fez is twinned with:

Published in the 19th century

Published in the 20th century

Published in the 21st century