Fictitious entries are included either as a humorous hoax or as a copyright trap to reveal subsequent plagiarism or copyright infringement. An outright forgery intended to mislead the reader on a matter of substance would not generally be classed as a fictitious entry.

The neologism Mountweazel was coined by the The New Yorker based on a fictitious biographical entry in the 1975 New Columbia Encyclopedia.[2]

The term nihilartikel combines the Latin nihil ("nothing") and German artikel ("article");[1] it can also be written as nihil article.

By including a trivial piece of false information in a larger work, it is easier to demonstrate subsequent plagiarism if the fictitious entry is copied along with other material. An admission of this motive appears in the preface to Chambers's 1964 mathematical tables: "those [errors] that are known to exist form an uncomfortable trap for any would-be plagiarist".[3] Similarly, trap streets may be included in a map, or invented phone numbers in a telephone directory.

In the United States, fictitious entries may be used to demonstrate copying, but are not always sufficient to prove legal infringement if the material was not eligible for copyright (see Feist v. Rural, Fred Worth lawsuit or Nester's Map & Guide Corp. v. Hagstrom Map Co., 796 F.Supp. 729, E.D.N.Y., 1992.)[4] These traps may still aid in detection of copying and may be proof of copyright infringement if the original material was eligible for copyright. 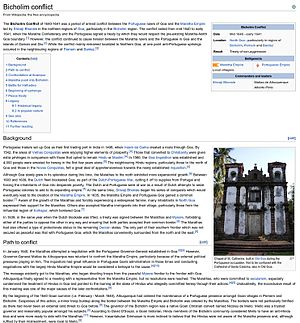 "Bicholim conflict" was a fictitious entry on Wikipedia that lasted from 2007 until 2012.

Most listings of the members of the German parliament feature the fictitious politician Jakob Maria Mierscheid, allegedly a member of the parliament since 1979. Among other activities he is reported to have contributed to a major symposium on the equally fictitious stone louse in Frankfurt.

Zzxjoanw was the last entry in Rupert Hughes’ Music Lovers’ Encyclopedia of 1903, and it continued as an entry in subsequent editions down to the 1950s. It was described as a Māori word for a drum. Later, it was proved to be a hoax (having seemed suspect because Māori does not use the letters J, X or Z).

The 1975 New Columbia Encyclopedia contains a fictitious entry on Lillian Virginia Mountweazel (1942–1973).[2] Her biography claims she was a fountain designer and photographer, best known for Flags Up!, a collection of photographs of rural American mailboxes. Supposedly she was born in Bangs, Ohio, and died in an explosion while on assignment for Combustibles magazine. Mountweazel was the subject of an exhibit in Dublin, Ireland, in March 2009 examining her fictitious life and works.[5]

The first printing of the 1980 New Grove Dictionary of Music and Musicians contains two fictitious entries: on Guglielmo Baldini, a non-existent Italian composer, and Dag Henrik Esrum-Hellerup, who purportedly composed a small amount of music for flute. Esrum-Hellerup's surname derives from a Danish village and a suburb in Copenhagen. The two entries were removed from later editions, as well as from later printings of the 1980 edition.

In August 2005, The New Oxford American Dictionary gained media coverage[2] when it was leaked that the second edition contained at least one fictional entry. This later was determined to be the word esquivalience, defined as "the wilful avoidance of one's official responsibilities," which had been added to the edition published in 2001. It was intended as a copyright trap, as the text of the book was distributed electronically and thus very easy to copy.

The German-language medical encyclopedia Pschyrembel Klinisches Wörterbuch features an entry on the Steinlaus (stone louse), a rock-eating animal.[6] The scientific name Petrophaga lorioti implies its origin: a creation of the German humorist Loriot. The Pschyrembel entry was removed in 1996 but, after reader protests, was restored the next year, with an extended section on the role of the stone louse in the fall of the Berlin Wall.

Joel Whitburn's pop chart research books say that Ralph Marterie's version of "The Song Of Love" peaked at #84 for the week ending December 26, 1955. However, Billboard Magazine did not put out an issue that week, and Marterie never recorded this tune. A similar situation occurs in his compilation of Billboard's Rock charts, where Whitburn includes the fictitious song "Drag You Down" by the equally non-existent group The Cysterz. A possibly fictional entry within the Billboard charts was "Ready 'N Steady," a record allegedly from a band named "D.A." (also believed not to exist) that managed to appear on the Bubbling Under the Hot 100 for three weeks in 1979; Whitburn spent three decades looking for a copy of the record before determining it did not exist, and the most likely candidate for recording it, a Chicago-based band named DA! that was active at the time, denies ever recording a song by that name.[7]

Fictitious entries on maps may be called phantom settlements, trap streets, paper towns, cartographer's follies, or other names. They are intended to help unmask copyright infringements; if caught, copyright violators wouldn't be able to explain the entry's presence on their maps.[citation needed]

In 1978, the fictional Ohio towns of Beatosu and Goblu were inserted into that year's official state of Michigan map as nods to the University of Michigan and its traditional rival, Ohio State University.[8]

The fictional town of Agloe, New York, was invented by map makers, but eventually became identified as a real place by its county administration because a building, the Agloe General Store, was erected at its fictional location. The "town" is featured in the novel Paper Towns by John Green and its film adaptation.

Mount Richard, a fictitious peak on the continental divide in the United States, appeared on county maps in the early 1970s. It was believed to be the work of a draftsman, Richard Ciacci. The fiction was undiscovered for two years.[9]

In the United Kingdom in 2001, the Ordnance Survey (OS) obtained a £20m out-of-court settlement from Automobile Association (the AA) after content from OS maps was reproduced on AA maps.[10] The Ordnance Survey denied that it included "deliberate mistakes" in its maps as copyright traps, claiming the "fingerprints" which identified a copy were stylistic features such as the width of roads.[11]

The fictitious English town of Argleton was investigated by Steve Punt in an episode of the BBC Radio 4 Program Punt P.I. The program concluded that the town's entry may well have originated as a copyright trap.[12]

Fictitious entries are sometimes plot points in fiction, including:

Australian palaeontologist Tim Flannery's book, Astonishing Animals, written in collaboration with painter Peter Schouten, describes some of the more outlandish animals alive on Earth. They caution that one of the animals is a product of their imagination and it is up to the reader to distinguish which one it is.

Rhinogradentia are a fictitious mammalian order, extensively documented in a series of articles and books by the equally fictitious German naturalist Harald Stümpke. Allegedly, both the animals and the scientist were the creations of Gerolf Steiner, a zoology professor at the University of Heidelberg.

Each issue of the product catalogue for Swedish consumer electronics and hobby articles retailer Teknikmagasinet contains a fictitious product. Finding that product is a contest, "Blufftävlingen", in which the best suggestion for another fictitious product from someone who spotted the product gets included in the next issue.[16]

Muse (a magazine for children 10–14, published in the USA) regularly includes a two-page spread containing science and technology news. One of the news stories is false and readers are encouraged to guess which one.

Games (a magazine devoted to games and puzzles) used to include a fake advertisement in each issue as one of the magazine's regular games.

In the summer of 2008, state-owned Slovak Hydrometeorological Institute (Slovak: Slovenský hydrometeorologický ústav, short: SHMÚ) got suspicious that a competing commercial service, website meteo.sk was stealing their data. The suspicion grew even stronger when after SHMÚ's three-hour-long website outage the data at meteo.sk was not updated for three hours as well. On August 7, 2008, SHMÚ deliberately altered the temperature for Chopok from 9.5 °C to 1 °C. In a short time, the temperature of 1 °C appeared for Chopok at meteo.sk as well.[17]

The ANP in the Netherlands once deliberately included a false story about a fire in their radio newscast to verify if Radio Veronica really had stolen its news from the ANP. Several hours later, Radio Veronica also aired the story.

Google, alleging its search results for a misspelling of tarsorrhaphy started appearing in Bing results partway through the summer of 2010, created fabricated search results where a hundred query terms like "hiybbprqag", "delhipublicschool40 chdjob" and "juegosdeben1ogrande" each returned a link to a single unrelated webpage. Nine of the hundred fraudulent results planted by Google were later observed as the first result for the bogus term on Bing.[18][19][20]

Mailing lists may contain fictitious entries, for instance: lists used to solicit donations. These lists can have considerable value when they contain contact details of people known to give generously to specific types of causes. Mail sent to the fictitious entry indicates that some other party is using a copy of the list.

Taro Tsujimoto is a fictional character often included in Buffalo Sabres reference works. Tsujimoto, an alleged Japanese forward, was the creation of Sabres general manager George “Punch” Imlach designed to fool the National Hockey League during the 1974 NHL Amateur Draft; Imlach drafted Tsujimoto and only months later—well after the pick was made official—admitted that the league had been fooled by the fictitious player.

Franz Bibfeldt is a fictitious theologian created by Robert Howard Clausen for a footnote in a student paper. Bibfeldt was later popularized by Clausen's classmate Martin Marty as an ongoing in-joke among theologians, including a book and a parody lecture series at the University of Chicago Divinity School.

The literature about fakes, parody, travesty, and pastiche barely touches upon the phenomenon of fictitious entries. This may be because reference books are not in the view of the people writing on these topics. Among the few exceptions are two German language articles: