The Royal Navy's field gun competition is a contest between teams from various Royal Navy commands, in which teams of sailors compete to transport a field gun and its equipment over and through a series of obstacles in the shortest time. The competition evolved during the early years of the 20th century. The "Command" format, negotiating walls and a chasm, was held annually at the Royal Tournament in London from 1907 until 1999, apart from the periods during the World Wars. The "Inter-Port" or "Command" Competition was contested by teams from the Royal Navy annually, and was a popular item at the Royal Tournament until finishing in 1999.

The "Brickwoods" Field Gun competition also ran from 1907 after the Brickwoods Brewery donated a magnificent Trophy to the Royal Navy. This competition involving no obstacles and run on a flat track continues to be competed for on an annual basis at HMS Collingwood.

It is now held as part of the Birmingham Tattoo held yearly in the city of Birmingham, where it has been held since 2014, sponsored by the RNRMC.

The origins of the field gun competition lie in the Second Boer War in South Africa. The legendary story tells of the siege of the British garrison in Ladysmith in 1899. In support of the British Army, the Royal Navy landed guns from HMS Terrible and Powerful to help in the relief of the siege. The Naval Brigade transported guns over difficult terrain and brought them into action against the Boers.

The Royal Navy landed two 4.7-inch (120 mm) guns and four 12-pounder naval guns creating improvised field guns using makeshift gun carriages. The guns were transported inland by rail and then drawn on makeshift carriages by oxen. For the final part of the journey, sailors from the Naval Brigade manhandled the guns over very difficult terrain. One story tells of sailors carrying one of the 12-pounder guns for 2 miles (3.2 km) after one of the wheels collapsed.

The siege of Ladysmith lasted for 120 days until February 1900. On their return home, the sailors from the Naval Brigade paraded their guns through London and appeared at the Royal Naval and Military Tournament at the Agricultural Hall, Islington. Displays of field gun drill continued in subsequent years.

A precursor to the competition lay in the presentation of Field Gun 'Evolutions' including one performed by Miss Weston’s Naval Boy’s Brigade from Portsmouth at the Royal Albert Hall on 21 October 1905 as part of the Centenary Commemoration of the Battle of Trafalgar. A film clip of this evolution survives from the period[2] which was filmed by Alfred J West for his popular 'Our Navy' film presentations in the early 1900s.

The Interport ("Command") Field Gun competition was established in 1907 and was a highlight of the Royal Tournament until the Last Run in 1999.

The "Brickwoods" trophy itself is a reproduction in silver of a 12-pounder field gun and a gun crew of seven sailors. The names of the winners of the trophy are engraved on small shields up to and including 1961 and plates for winners since 1962. Originally mounted on a black ebony stand, this was replaced in 1961 by the current polished wooden base. At this time the winners' shields transferred to the new mounting, although not in the same order as they had appeared on the previous stand.

Before the First World War the competition was moved from the RN Barracks to Whale Island, where it continued until 1973; the following year it transferred to HMS Collingwood, its famously large parade ground reputed to have once held as many as 8,000 ratings is the perfect setting for the event.

HMS Collingwood itself has had a good record in the competition, having won the Brickwood Trophy 16 times between 1957 and 2006. Records for completing the course have continued to be broken. The Royal Marines set a new record in 1924 of 1 minute 24.40 seconds. This was exceeded in seven subsequent years and eventually in 1938 HMS Excellent achieved 1 minute 13.40 seconds.

Brickwood maintained a close interest in the competition over the years. In 1969 Sir Rupert Brickwood Bart presented the trophy and tankards and a firkin of Brickwood's beer to the winning team. In 1971 Brickwood's business was acquired by London-based brewers Whitbread & Co Ltd. The Royal Navy Royal Marines Charity (RNRMC) have take over as the main event sponsor but the Brickwood's trophy remains.

After a century this spectacle of toughness, courage, discipline and teamwork is still going strong. 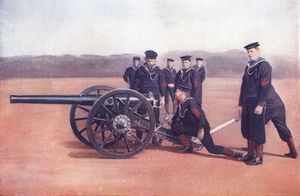 Naval crew with the 12-pounder 8 cwt, the type used in the competition, in the 1890s

The Royal Navy Field Gun competition was contested by teams from the Royal Naval commands of Portsmouth, Devonport and the Fleet Air Arm (although teams from Chatham and the Royal Marines have also competed). At each performance of the Royal Tournament, two crews competed to transport a 12 pounder field gun and limber over a series of obstacles.

From the start line in front of the Royal Box, the crews pulled the guns and limbers to the end of the arena where they turned and carried themselves and the equipment over a 5-foot (1.5 m) wall. The guns and limbers were then dismantled and carried to the top of a ramp on the "home side" of a 28-foot (8.5 m) "chasm". The crew set up a wire and traveller so all 18 members of the crew and their equipment could cross the chasm. The team and equipment then passed through a hole in the "enemy wall" at the end of the arena. Each crew then fired three rounds to end the "Run Out". The average time for the "Run Out" was 85 seconds.

The second part of the competition (the "Run Back") involved the crews taking all their equipment back over the 5-foot (1.5 m) enemy wall and then back across the chasm. Once all the crew and equipment were back on the home side of the chasm, the wire and traveller were dismantled and three more rounds were fired in a rear guard action. The average time for the "Run Back" was 60 seconds.

In the final stage, the "Run Home", men, guns and limbers passed back through the hole in the home wall and then the teams "hook up and pull for home". The clock was stopped as the teams crossed back over the start line. The average time for the "Run Home" was 21 seconds.

Three Commands, Devonport, Fleet Air Arm and Portsmouth currently have associations made up of past members of their Command Field Gun Crews, since its demise in 1999 and a heritage centre and museum at Crownhill Fort, Plymouth is maintained and run by Devonport Field Gun Association.

The competition simulates the drill which would have been undertaken to bring a naval field gun into action during the march to Ladysmith.

1st Advance, 1st Wheel Change
The limber is lifted, its wheels and drag ropes are shipped and it is run forward. The gun wheels are exchanged with the limber wheels. The gun is brought to the back of the limber and connected, then both are run forward.

2nd Advance, 1st Action
The gun is unhooked and the limber is run to the 70-yard line, where it is turned or spun to face the start; its wheels are removed, and it is dropped to the ground. The gun is run to the end of the track, turned and stopped. The gun is fired three times, each shell being run to the gun from the limber by the fastest man in the crew.

1st Retire, 2nd Wheel Change
The limber wheels are shipped, and it is run back and hooked to the gun. Both are then run towards the start, stopped and lifted together to exchange wheels. This is the heaviest lift of all, and life gets very difficult if the gear is dropped.

2nd Retire, 2nd Action
Gun and limber are run towards the start line, separated and stopped. The gun is fired three times as quickly as possible.

3rd Retire and Finish
The limber is run back and hooked to the gun, then every member of the crew strains to accelerate the gear over the finish line. This is not the best time to fall in front of the gear, because it is very heavy and cannot be stopped.

Time penalties are added to the running time for each contravention of the rules, which are published each year under the title "Royal Navy Field Gun Instructions (RNFGI)". There are 38 possible contraventions defined that carry a time penalty ranging from 1 to 6 seconds. These are applied as appropriate to each team upon completion of the drill by the event's Chief Judge.

Previous winners of the Brickwood Trophy