A fighter pilot is a military aviator trained to engage in air-to-air, and often air-to-ground combat while in the cockpit of a fighter aircraft. Fighter pilots undergo specialized training in aerial warfare and dogfighting (close range aerial combat). A fighter pilot with at least five air-to-air kills becomes known as an ace. Not all fighter pilots have experienced actual aerial combat mainly due to the decline of conventional warfare, with many countries cutting the budgets of their air forces and shifting their focus to research and development of unmanned aerial vehicles for possible future combat roles, which may replace the need for new fighter pilots entirely.

Fighter pilots are one of the most highly regarded and desirable positions of any air force. Selection processes only accept the elite out of all the potential candidates. An individual who possesses an exceptional academic record, physical fitness, healthy well-being, and a strong mental drive will have a higher chance of being selected for pilot training. Candidates are also expected to exhibit strong leadership and teamwork abilities. As such, in nearly all air forces, fighter pilots, as are pilots of most other aircraft, are commissioned officers.

Fighter pilots must be in optimal health to handle the physical demands of modern aerial warfare. Excellent heart condition is required, as the increased "G's" a pilot experiences in a turn can cause stress on the cardiovascular system. One "G" is equal to the force of gravity experienced under normal conditions, two "G"s would be twice the force of normal gravity. Some fighter aircraft regularly accelerate to up to 9 Gs. Fighter pilots also require strong muscle tissue along the extremities and abdomen, for performing an anti-G straining maneuver (AGSM, see below) when performing tight turns and other highly accelerated maneuvers. Better-than-average visual acuity is also a highly desirable and valuable trait. 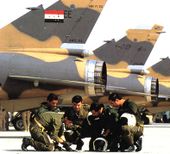 Modern medium and long range active radar homing and semi-active radar homing missiles can be fired at targets outside or beyond visual range. However, when a pilot is dogfighting at short-range, his position relative to the opponent is decidedly important. Outperformance of another pilot and that pilot's aircraft is critical to maintain the upper-hand. A common saying for dogfighting is "lose sight, lose fight".

If one pilot had a greater missile range than the other, he would choose to fire his missile first, before being in range of the enemy's missile. Normally, the facts of an enemy's weapon payload is unknown, and are revealed as the fight progresses.

Some air combat maneuvers form the basis for the sport of aerobatics:

Pilots are trained to employ specific tactics and maneuvers when they are under attack. Attacks from missiles are usually countered with electronic countermeasures and chaff. Missiles like the AIM-120 AMRAAM, however, can actively home in on jamming signals.[citation needed]

Dogfighting at 1 to 4 miles (1,600 to 6,400 m) is considered "close". Pilots perform stressful maneuvers to gain advantage in the dogfight. Pilots need to be in good shape in order to handle the high G-forces caused by aerial combat. A pilot flexes his legs and torso to keep blood from draining out of the head. This is known as the AGSM or the M1 or, sometimes, as the "grunt".[citation needed]

Many early air-to-air and surface-to-air missiles had very simple infrared homing ("heat seeking") guidance systems with a narrow field of view. These missiles could be avoided by simply turning sharply, which essentially caused the missile to lose sight of the target aircraft. Another tactic was to exploit a missile's limited range by performing evasive maneuvers until the missiles had run out of fuel.

Modern infrared missiles, like the AIM-9 Sidewinder, have a more advanced guidance system. Supercooled infrared detectors help the missile find a possible exhaust source, and software assists the missile in flying towards its target. Pilots normally drop flares to confuse or decoy these missiles.

Radar homing missiles could sometimes be confused by surface objects or geographical features causing clutter for the guidance system of either the missile or ground station guiding it. Chaff is another option in the case that the aircraft is too high up to use geographical obstructions. Pilots have to be aware of the potential threats and learn to distinguish between the two where possible. They use the RWR (radar warning receiver) to discern the types of signals hitting their aircraft.

When maneuvering fiercely during engagements, pilots are subjected to high g-force. G-Forces express the magnitude of gravity, with 1G being equivalent to Earth's normal pull of gravity. Because modern jet aircraft are highly agile and have the capacity to make very sharp turns, the pilot's physical body is often pushed to the limit.

When executing a "positive G" maneuver like turning upwards the force pushes the pilot down. The most serious consequence of this is that the blood in the pilot's body is also pulled down and into their extremities. If the forces are great enough and over a sufficient period of time this can lead to blackouts (called g-induced Loss Of Consciousness or G-LOC), because not enough blood is reaching the pilot's brain. To counteract this effect pilots are trained to tense their legs and abdominal muscles to restrict the "downward" flow of blood. This is known as the "grunt" or the "Hick maneuver", both names allude to the sounds the pilot makes, and is the primary method of resisting G-LOCs. Modern flight suits, called g-suits, are worn by pilots to contract around the extremities exerting pressure, providing about 1G of extra tolerance.

Until the early 1990s women were disqualified from becoming fighter pilots in most of the air forces throughout the world. The exceptions being Turkey where Sabiha Gökçen became one of the first female fighter pilot in history in 1936 and went on to fly fast jets well into the 1950s,[3] and the USSR during the Second World War 1942–1945 where many women were trained as fighter pilots including Lilya Litvyak who became the top scoring woman ace of all time with 12 Kills and Katya Budanova a close second with 11 kills, although both were killed in combat.[4] In the last decade of the twentieth century a number of air forces have removed the bar on women becoming fighter pilots (see below):