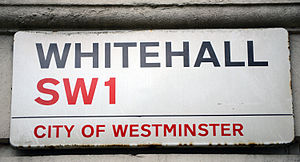 Whitehall is a road in the City of Westminster, London and used as a figure of speech for central government due to the number of departments located in the area.

A figure of speech or rhetorical figure[1] is figurative language in the form of a single word or phrase. It can be a special repetition, arrangement or omission of words with literal meaning, or a phrase with a specialized meaning not based on the literal meaning of the words. There are mainly five figures of speech: simile, metaphor, hyperbole, personification and synecdoche. Figures of speech often provide emphasis, freshness of expression, or clarity. However, clarity may also suffer from their use, as any figure of speech introduces an ambiguity between literal and figurative interpretation.

The four fundamental operations, or categories of change, governing the formation of all figures of speech are:-[2]

These four operations were detected by classical rhetoricians, and still serve to encompass the various figures of speech. Originally these were called, in Latin, the four operations of quadripartita ratio. The ancient surviving text mentioning them, although not recognizing them as the four fundamental principles, is the Rhetorica ad Herennium, of unknown authorship, where they are called πλεονασμός (addition), ἔνδεια (omission), μετάθεσις (transposition) and ἐναλλαγή (permutation).[3] Quintillian then mentioned them in Institutio Oratoria.[4] Philo of Alexandria also listed them as addition (πρόσθεσις), subtraction (ἀφαίρεσις), transposition (μετάθεσις), and transmutation (ἀλλοίωσις).[5]

Figures of speech come in many varieties. The aim is to use the language inventively to accentuate the effect of what is being said. A few examples follow:

Whereas, "Sister Suzy sewing socks for soldiers" is a particular form of alliteration called sibilance, because it repeats the letter s.
Both are commonly used in poetry.

Scholars of classical Western rhetoric have divided figures of speech into two main categories: schemes and tropes. Schemes (from the Greek schēma, form or shape) are figures of speech that change the ordinary or expected pattern of words. For example, the phrase, "John, my best friend" uses the scheme known as apposition. Tropes (from the Greek trepein, to turn) change the general meaning of words. An example of a trope is irony, which is the use of words to convey the opposite of their usual meaning ("For Brutus is an honorable man; / So are they all, all honorable men").

For simplicity, this article divides the figures between schemes and tropes, but does not further sub-classify them (e.g., "Figures of Disorder"). Within each category, words are listed alphabetically. Most entries link to a page that provides greater detail and relevant examples, but a short definition is placed here for convenience. Some of those listed may be considered rhetorical devices, which are similar in many ways.

(Eg: She sells sea shells by the sea shore).