Filton is an area located in the city of Bristol, about 4.5 miles (7.2 km) from the city centre. Filton lies in Bristol postcode areas BS7 and BS34. The town centres upon Filton Church, which dates back to the 12th century and is a grade II listed building.[2][3][4] Further north are the towns of Patchway and Bradley Stoke.

The name of the town comes from the Old English feleþe (hay), and tūn (farm, field). The name dates back to at least 1187.

Filton has large areas of open space, which includes several playing fields, a golf course and a large airfield, Bristol-Filton.

Districts within the town include East Filton, Filton Park and Northville. East Filton, which has grown up east of the Bristol-South Wales railway line and is mostly in the neighbouring civil parish of Stoke Gifford, contains the offices of the Ministry of Defence Defence Procurement Agency, plus a shopping park. Filton Park is a suburb of Bristol and lies directly on the city border, sandwiched between the A38 trunk road and Southmead Road. Filton itself lies to the north and east of Filton Park. Monks Park is to the south. Housing in Filton Park is mainly privately owned, semi-detached and 1930s built. Pre-World War I properties in the district tend to be quite large, with generous gardens. Extensive playing fields border the north-western side of Southmead Road. The golf links, on the hillside beyond, is owned by Filton Golf Club. The area has a primary school and a playgroup. Filton Park is regarded as a desirable place to live since it is close to major centres of employment such as BAE Systems, and the Ministry of Defence at Abbey Wood.

Filton's educational facilities include South Gloucestershire and Stroud College, Abbeywood Community School and several primary schools. The University of the West of England is at nearby Frenchay.

Filton has two main shopping areas – the Shield Centre (on the site of the former Shield Laundry) and Abbey Wood Retail Park, as well as other shops. To the east of the town there is a small area of woodland known as Splatt's Abbey Wood. 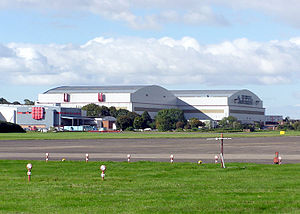 Filton has an aerospace connection dating back to the establishment of the Bristol Aeroplane Company. Aerospace companies in Filton include BAE Systems, Airbus, Rolls-Royce and MBDA, all located around Filton Aerodrome. On 26 November 2003 Concorde 216 (G-BOAF)[5] made the final flight of a Concorde, returning to Filton to be kept there permanently as the centrepiece of a projected air museum.[6] This museum will include the existing Bristol Aero Collection which was kept at Kemble Airport, 33 miles (53 km) from Filton, until May 2012. This collection includes helicopters and missiles built at Filton. Other organisations include the MOD, Viridor, Hewlett Packard and the Royal Mail. Filton is also home to the regional blood processing facility, NHS Blood and Transplant Filton.[7]

Bristol Cars was a manufacturer of hand-built luxury cars, based in Filton. Bristol Cars had neither distributors nor dealers and dealt directly with customers; they had a showroom in Kensington in London. They claimed to be the last wholly British-owned luxury car builder. The company went into administration on 3 March 2011.[8] 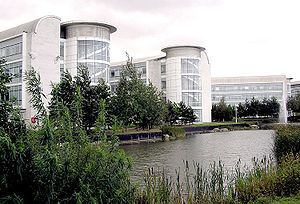 Part of the Ministry of Defence Defence Equipment and Support) building at Abbey Wood, Filton. The site employs over 4000 people, managing procurement contracts for the Navy, the Army and the Air Force

Filton is represented in the House of Commons by Jack Lopresti, Conservative Party Member of Parliament (MP) for the constituency of Filton and Bradley Stoke.

An electoral ward with the same name exists. The area and population are identical to those of the parish.

Filton Town Council is a parish council made up of thirteen councillors and manages the Council precept on behalf of Filton taxpayers. 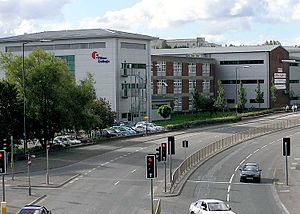 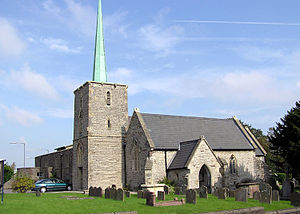 At the dawn of the 20th century, Filton was a small village, still detached from the city of Bristol to the south. Farming was the principal occupation. However, there was a large factory-like laundry in the village, opposite Filton House, owned by Samuel Shield.

The Bristol to South Wales railway line passed through the village. There was a small station near the site of the current Abbey Wood Station. A much larger railway station, known as Filton Junction, opened in 1910, after the rail route from Bristol to London was finished.

Between the wars Filton expanded rapidly, to become a suburb of Bristol. Terraced and semi-detached housing, in small estates on both sides of the A38 trunk road, was built. Eventually, Filton became part of the Bristol conurbation, although it remained outside the city boundary.

During the 1930s, two infant/primary schools and one secondary school were built in Filton to accommodate the growing number of school-age children in the area. Many of these children were evacuated when World War II started in 1939, but returned later, during the Phoney War.

Filton High School, originally a grammar school, but now a comprehensive, started to take pupils in 1960.

In the late 1940s The main runway of Filton Aerodrome was greatly extended for the Brabazon project. Charlton village was demolished and the pre-war Filton bypass was severed. In the early 1960s, a new bypass was constructed, roughly parallel to the old one, and this later became part of the M5 motorway.

Sandwiched between roads, factories, railway lines and the aerodrome, Filton expanded little after WWII. However, from the late 1970s a trading estate slowly developed on the eastern side of the Bristol/South Wales railway line in what is now known as East Filton. Later, the Ministry of Defence set up a large office complex, known as Abbey Wood, in the same area.

Filton is also home to the Filton Concert Brass. The band, formed 60 years ago, is currently Bristol's highest-placed brass band, having been promoted to the First Section of the West Region at the 2010 Regional Finals in Torquay. This places them above other Bristol bands such as Bristol East and Kingswood, and City of Bristol. For the past few years, the band has been conducted in contests by Bryn James. The band's oldest serving member, Jim Scott, was a founding member of the band and, until this year, had played in the regional finals every year!