The Fine Arts of the Leningrad retrospective exhibition (Russian: Выставка "Изобразительное искусство Ленинграда" 1976 года) became the largest showing of Leningrad artists in the Soviet History outside the city, as well as in total one of the most important art exhibitions in USSR of the 1970s.[1] The exhibition took place in the Moscow Manezh.

The retrospective exhibition Fine Arts of the Leningrad was opened in Moscow at the end of 1976. The organization and preparation of the exhibition carried out by a specially formed exhibition committee, which consisted of 44 the most authoritative art experts under head of Boris Ugarov. It published a catalog of the exhibition.[2] The exhibition displayed works of art by painters, sculptors, graphics, masters of arts and crafts, and artists of theater and cinema covering a span of over 40 years. The artworks were presented from the important Soviet art museums, including the State Russian Museum and the Tretyakov gallery. 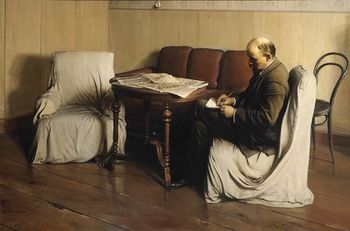 For the exhibition were selected best art works created for over 40 years, from the first post revolution decade up to today. Many of them had a rich exhibit history and were presented from collections of leading Art museums.

Historical genre was presented of "Duel on the Kulikovo Field" (Russian Museum) by Mikhail Avilov, "Workers of War" by Nikolay Babasjuk, "In the Years of War" by Nikolai Baskakov, "Lenin among delegates III Congress of the Komsomol" by Piotr Belousov, "Lenin in Smolny", "Demonstration" (Russian Museum) by Isaak Brodsky, "Was left alone" by Dmitry Buchkin, "Lenin with workers" by Lev Chegorovsky, "To Lenin" by Alexey Eremin, "Ice Track. Ladoga Lake. April 23, 1942" by Boris Korneev, "Stepan Razin", "Celebration of the Opening 2nd Congress of Comintern on the Uritsky Squear on June 19, 1920" (Russian Museum) by Boris Kustodiev, "Roads of War", "Ancient Russia" by Boris Lavrenko, "Leningrad in the Struggle" by Oleg Lomakin, "The Year of 1905" Vladimir Malevsky, "Donbass in the first day of war" (Russian Museum), "Petrograd in 1917" by Boris Maluev, "We'll not Forget", "Patrol" by Mikhail Natarevich, "Partisan" by Samuil Nevelshtein,"Rest after the Buttle"(Tretyakov Gallery), "Sun again", "Bread. The Year of 1941", "Tram is going to the Front", "Sailor of the Baltic Fleet" by Yuri Neprintsev, "To the Big Ground" (Russian Museum) by Yaroslav Nikolaev, "Summer of 1941" by Dmitry Oboznenko, "Lenin on Exam in Leningrad University" by Victor Oreshnikov, "Trench Pravda" by Yuri Pimenov, "Near Academia of Science", "At Home", "For the Water", "Winter Groove" by Mikhail Platunov, "Partisans of the Lesgaft Institute after combat operation", "In the Leningrad Philharmonic. 1942 Year" (both Russian Museum) by Joseph Serebriany, "Peasant Petitioners to Lenin", "Winter Palace is Detaied" by Vladimir Serov, "On the Mine", "October", "Leningrad Citizen. In 1941 year", "October" by Boris Ugarov, and some others.[4]

Genre painting was represented of "In the Country", "Guests" by Olga Bogaevskaya, "On the Balcony" (Russian Museum) by Isaak Brodsky, "Barentsevo Sea" by Lev Bogomolets, "Onega Fish Soup", "Mothers Thought" (Russian Museum) by Alexey Eremin, "Cabby scorcher" (Russian Museum) by Rudolf Frentz, "Thoughts", "About the coming day" by Leonid Kabachek, "Black Gold", "To the Miners" by Engels Kozlov, "Developing of the North", "Gold of the Polar Region" by Boris Korneev, "Warm Day"(Russian Museum), "In Depence of Revolution" by Anatoli Levitin, "Repetition" by Oleg Lomakin, "Mothers, Sisters" (Russian Museum), "Messengers" (Tretyakov Gallery), "Cherry" by Evsey Moiseenko, "Sons" by Yuri Mezhirov, "Sisters", "Waking up" (both Russian Museum) by Andrei Mylnikov, "To the Theatre" by Vera Nazina, "Lesson of History" by Samuil Nevelshtein, "Fantasia. Rider of the Red Horse", "Alarm" by Kuzma Petrov-Vodkin, "Weaving Workshop", "Military Komsomol" (both Russian Museum) by Alexander Samokhvalov, "In the Hermitage", "Shop Window" by Vladimir Sakson, "Lacemakers" by Elena Skuin, "Spring in Ostrov Village", "Ice Drifting", "Silver Cities", "Daybreak" by Vitaly Tulenev, "Weekend in Central Park of Culture and Recreation" by German Yegoshin, "Bird-cherry is Blooming" (Russian Museum) by Vecheslav Zagonek, "Toilers of the Sea" by Alexander Zaytsev, and some others.[6]

Still life paintings was represented by "Chromatic Volumes Planes" (Russian Museum) by Natan Altman, "Painting of Porcelain" by Zaven Arshakuni, "South Still Life" by Evgenia Antipova, "Still Life with a Tray" by Olga Bogaevskaya, "Still-life with Flower and Drapery", "Still-life with Log" by Alexey Karev, "Work Table", "Still-life with Persimmon" by Maya Kopitseva, "Winter Morning" by Elena Kostenko, "Still-life", "Green Still-life" by Gevork Kotiantz, "Guitar with Porcelain Cat", "Guitar, Jug and Apples", "Paper Flowers and Shell" (all Russian Museum) by Vladimir Lebedev, "Still-life. Pears" by Gavriil Malish, "Guitars" by Evsey Moiseenko, Still-life by Andrei Mylnikov, Still-life with Balalaika by Sergei Osipov, "Bird Cherry in a glass", "Herring" (both Russian Museum) by Kuzma Petrov-Vodkin, "Jugs on the Red table-cloth", "At the Window" by Valentina Rakhina, "Night Still-life" by Vladimir Sakson, "Still life with antic sculpture" by Arseny Semionov, "Red Carnations" by Kim Slavin, "The Beginning of the Spring", "A March" "Before the Rain" by Ivan Varichev, "Bouquet" by German Yegoshin, "Still-life", "Irises" by Sergei Zakharov, and some others.[8]

The retrospective exhibition Fine Arts of the Leningrad was widely covered in press[9][10] and in literature specialized at Soviet fine art.[11][12][13][14]