Finnish military ranks form a system that incorporates features from Swedish, German, and Russian armed forces. In addition, the system has some typically Finnish characteristics that are mostly due to the personnel structure of the Finnish Defence Forces. The ranks have official names in Finnish and Swedish languages and official English translations. The Swedish forms are used in all Swedish-languages communications in Finland, e.g. in Swedish-speaking units of Finnish Defence Force. The system of ranks in the Swedish Armed Forces is slightly different.

Finland practices universal conscription of men (c. 80% of each age cohort), and maintains only a cadre of paid personnel for training and maintaining military readiness. Most of lower ranks are conscripts, and leave service as sotamies (Private) or korpraali (Private 1st Class). Junior leaders, about 20% of age cohort, serve 12 months and leave service as alikersantti (Corporal) or kersantti (Sergeant). 10% of conscripts are trained as reserve officers, serving 12 months, and leave service usually as vänrikki (2nd Lieutenant) or in the Navy as aliluutnantti (Ensign). In principle, there should be no distinction between reserve and active ranks, and NCOs and reserve officers can be promoted in reserve, up to everstiluutnantti (Lieutenant Colonel). During peace time, reservists are inactive, i.e. they do not receive pay or have a position in the chain of command. Reservists are in duty only when mobilized during a crisis or when attending mandatory or voluntary refresher exercises. Nevertheless, reserve NCO or officer ranks are respected within the Finnish society and are an entrance requirement to a military or border guard career.

Rank and file and non-commissioned officers are promoted to their ranks by the commander of a brigade or equivalent, with the exception of the highest NCO ranks of ylivääpeli (Master Sergeant) and sotilasmestari (Sergeant Major), who are promoted by the service commander and Chief of Staff of the Defence Command, respectively. All officers from vänrikki (2nd Lieutenant) and higher are promoted to their ranks and commissioned to their offices by the President of Finland.[1] Professional officers are trained at the Finnish National Defence University. Career officers graduate first as sotatieteen kandidaatti (Bachelor of Military Science), with an automatic promotion to luutnantti (Lieutenant), then work for 3–4 years' work as temporary officers. After this, they continue their studies to sotatieteen maisteri (Master of Military Science), which enables promotion to yliluutnantti (1st Lieutenant) and a commission to a permanent office.

The ranks currently used by the Finnish Defence Forces are (Finnish name above, and Swedish name below):

The military personnel of the Finnish Defence Forces is divided into three groups:[2]

Ranks sotamies and korpraali comprise the rank-and-file (miehistö). Soldiers in the rank of a private always have a branch or service specific title such as tykkimies "gunner" or matruusi, "seaman apprentice"; the non-specific rank of sotamies is no longer in use (see below). The NCO students rank as privates until they are promoted to privates 1st class.

The junior command personnel are formed from the professional or reserve NCOs and conscripts serving in ranks of corporal, officer student, sergeant or officer candidate or their naval equivalents. However, by regulation, all professional servicemen outrank conscripts.

Reservists belong to the personnel group determined by their military rank, but hold the position in the chain of command only from the moment they report to duty (or should have reported to duty) to the moment they have been discharged and have left the military installation. Unlike conscripts, the reservists rank with the professional military personnel without prejudice. The highest rank available to reserve officers is major, and in exceptional cases, lieutenant colonel.

The insignia is different from other European systems by some features. Stars are not used in the insignia. Large roses, instead of oak leaves, denote ranks from major to colonel. Generals wear lions (Lion of Finland), not stars. The qualifiers yli "Senior" and ali "Junior" are used in the names of some ranks; for example, kersantti is "Sergeant", while alikersantti is "Junior Sergeant" (Corporal).

In the Navy uniform, officers and Warrant officers wear the Lion of Finland on the top of their insignia, while Non-commissioned officers use the special insignia of their duty branch. In field uniforms, these emblems are dropped. Specialist officers always wear their specialist insignia in addition to their rank insignia on the collar patches. On sleeve and shoulder insignia, the specialty is denoted by coloured insignia background.

The NCO students do not wear any collar insignia. Their sole rank insignia consists of a silver line worn on the shoulder or arm of all uniforms, except in M/05 where the silver line is worn on the chest. 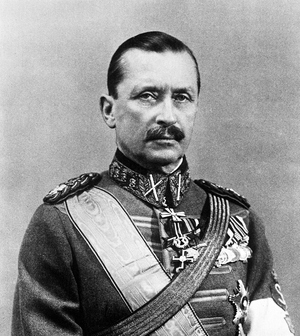 The ranks of field marshal (sotamarsalkka) and Marshal of Finland (Suomen marsalkka) were bestowed on Carl Gustaf Emil Mannerheim in 1933 and 1942, respectively. These are officially not military ranks but honorific titles, but were used like military ranks senior to the rank of general. The insignia used was a general's insignia added with crossed marshal's baton.

The rank of general may, as a sign of special recognition, include a service branch: those historically used were general of infantry (jalkaväenkenraali), general of cavalry (ratsuväenkenraali) and general of artillery (tykistökenraali). These additions do not affect seniority. There are no living general officers with such recognition, the last one being General of Infantry Adolf Ehrnrooth (1905–2004).

All generals from brigadier general to general are addressed as "Mr./Mrs. General"("herra/rouva kenraali"), and similarly for admirals.

Personnel serving in technical duties belonging to the officers without officer training hold the position of military civil servant (sotilasvirkamies). Their rank is comparable to either first lieutenant, lieutenant and staff sergeant, depending on the level of the civilian education required to serve in this position. The lowest class is reserved for non-salaried military civil servants. Usually the military civil servants are an exception as their positions are likely to be filled by special officers, who have received officer training and hold commissions in addition to civilian academic education. The most typical specialties are engineering and medicine. Civilian interpreters hired for UN peace keeping missions abroad are typically ranked as first lieutenant or lieutenant, according to their civilian education level.

Reservists may be promoted up to the rank of major both in special and normal officer ranks, if they show extraordinary commitment to national defence. In rare cases, reservists have been promoted to the rank of lieutenant colonel.

Chaplains serve in the ranks of chaplain (sotilaspastori), senior chaplain (kenttärovasti, literally, "field dean"), and chaplain general (kenttäpiispa, literally, "field bishop"), corresponding to the ranks of captain, lieutenant colonel, and brigadier general, respectively. In addition, they have a personal rank into which they revert at the end of their clerical service in the Finnish Defence Force. Conscript chaplains and deacons serve in their personal rank.

Conscripts who have passed a reserve officer course, serve as officer candidates (upseerikokelas) and are considered NCOs ranking always above conscript sergeants but below any career personnel.[3] They are addressed rouva/herra kokelas or rouva/herra upseerikokelas. At the end of their service period, they are promoted to second lieutenants.

Cadets (kadetti) are career military who have already passed their conscription and obtained the reserve officer's training and are now attending their professional officer education in the National Defence University. Cadets are senior to second lieutenants. In addition, the cadets may hold a cadet NCO rank which pertains to the seniority inside the Cadet Corps but does not affect their ranks in relation to other military personnel.

The NCO ranks in the Finnish Defence Force are filled by conscripts, career NCOs and contractual military personnel. The basic NCO rank is enlistee (sotilasammattihenkilö), which is a rank and file position reserved for career NCOs who have not received reserve NCO training. Its relation to other rank and file ranks is unspecified, in practise, during peacetime operations, any career NCO or contractual personnel is above conscript ranks. Career NCOs usually serve in the ranks of sergeant major, master sergeant, sergeant first class, staff sergeant and sergeant, the rank of enlistee being reserved for career NCOs without conscript NCO training.

The contractual military personnel (sopimussotilaat) serve in their reserve ranks. Until 2007, reserve officers served in the rank of staff sergeant. This practice has now been abolished and nowadays reserve officers use their reserve rank. As both conscript and career NCOs may serve in the rank of sergeant, career sergeants use a small sword insignia in conjunction of the chevrons to distinguish them from conscripts.

After discharge from the military, both career NCOs and contractual military personnel revert to their personal reserve ranks. The conscripts may hold the NCO rank of officer cadet, sergeant, officer student, or corporal. Reserve personnel may hold any NCO rank.

There are some positions, which resemble military ranks in their name, but are not. The position of the "sergeant major of a company" (or other unit such as battery in artillery) is called komppanian vääpeli "sergeant first class of the company". In past times it was the position of the unit's most senior career NCO, but nowadays the post is held often by someone from sergeant up to senior lieutenant in training units, or by a conscript NCO (alikersantti, kersantti etc.) in mobilized units. Another example is komendantti, which is not a rank but a security/executive officer position in a brigade. While the rank of komentaja is found in the navy, in general use it refers to a commander of a battalion or a larger unit.

Sotamies is the generic rank for private, however the rank of sotamies as is no longer used in any service branch. The rank is always given the name specific to the service branch:

Non-commissioned officer students hold either the permanent rank of private or lance corporal and rank accordingly. The rank of alokas is used to denote privates in basic training. The recruit, alokas is a new private, who has not been trained enough to have given a military oath or military guarantee. After having given an oath or such guarantee, the private soldier is not called anymore alokas, but he or she will be addressed as private or corresponding private level military rank.

Paratroop jaeger (laskuvarjojääkäri) and Special jaeger (erikoisjääkäri) in Utti Jaeger Regiment (Utin jääkärirykmentti) and Special border jaeger (erikoisrajajääkäri) in Special Border Jaeger Company of Border and Coast Guard School (Raja- ja merivartiokoulu) are not ranks, but specializations, where NCO training is given and thus each graduate is at minimum alikersantti.

Historically, the rank of sotamies was used in generic infantry units, while the rank of jaeger was in used specific jaeger battalions, which derived their traditions from the Jäger Movement.