From Infogalactic: the planetary knowledge core
Jump to: navigation, search
For other uses, see Agreement of Friendship, Cooperation, and Mutual Assistance (disambiguation). 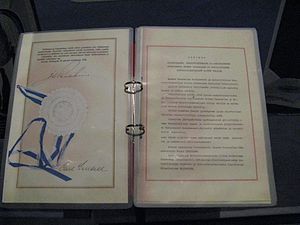 Under the treaty, which was signed on April 6, 1948, the Soviets sought to deter Western or Allied Powers from attacking the Soviet Union through Finnish territory, and the Finns sought to increase Finland's political independence from the Soviet Union. It thus ensured Finland's survival as a liberal democracy in close proximity to strategic Soviet regions, such as the Kola Peninsula and the old capital Leningrad.

Under the pact, Finland was obliged to resist armed attacks by "Germany or its allies" (in reality interpreted as the United States and allies) against Finland, or against the Soviet Union through Finland. If necessary, Finland was to ask for Soviet military aid to do so. However the pact in itself did not provide any provisions for the Soviet military to enter Finland and stipulated that all such actions would have to be agreed separately should Finland choose to request aid. Furthermore the pact did not place any requirements for Finland to act should the Soviet Union be attacked (if the attack would not take place through Finland). The agreement also recognized Finland's desire to remain outside great-power conflicts, allowing the country to adopt a policy of neutrality in the Cold War.

Due to the uncertain status of Finno–Soviet relations in the years after the Continuation War, and the precise interpretation of the treaty's wording, Finland followed the Warsaw Pact countries' decision and did not participate in the Marshall Plan. As a result, Finland's post-war period of economic hardship was prolonged, compared to other European capitalist countries, and it thus became considerably more economically dependent on the Soviet Union. In general, Finland kept its relations towards western military powers officially distant (including the proposed Scandinavian Defense Union) and NATO in particular. By avoiding supporting the West, it attempted to fend off Soviet pressure for affiliation with the Warsaw Pact. No joint military exercises were ever held, and other military cooperation was minimal, despite occasional Soviet advances.

The YYA Treaty was a cornerstone in Paasikivi's foreign policy. It was also a central policy under the presidency of Kekkonen (1956–1981), who dubbed his foreign policy doctrine the Paasikivi-Kekkonen line. The treaty was an instrumental tool for the Soviet Union to gain political leverage in the internal affairs of Finland in post-war era. This influence was commonly referred to as Finlandisation. It is hotly debated to what degree President Urho Kekkonen (President 1956–1981) intentionally used it to further his own influence and damage his opponents.

Despite the official policy, there was some secret co-operation with the West. This ranged from Finnish organizations such as the Social Democratic Party accepting CIA funding to sharing of seismic data on nuclear tests. Likewise, Eastern Bloc countries conducted espionage in Finland, e.g. the East German Stasi had agents.

The Soviet Union had similar agreements with many nations that were not directly allied with it but depended heavily on Soviet support, such as North Korea since 1961, with India since 1971, Vietnam since 1978, etc. The first such agreement, however, was with Free France in 1943.