From Infogalactic: the planetary knowledge core
Jump to: navigation, search
This article is about substances used to fight structure fires and wildfires. For chemical retardants used in textiles, see Flame retardant.

A fire retardant is a substance that reduces flammability of fuels or delays their combustion.[1][2] This includes chemical agents, but may also include substances that work by physical action, such as cooling the fuels, such as fire-fighting foams and fire-retardant gels. Fire retardants may also be coatings applied to an object,[3] such as a spray retardant to prevent Christmas trees from burning.[4] Fire retardants are commonly used in fire fighting.

Home fires damage about 400,000 homes, and cause approximately 7 billion US dollars in direct damage annually in the United States.[5] Because of the importance of prevention, fire retardation has become a very notable industry.

In general, fire retardants reduce the flammability of materials by either blocking the fire physically or by initiating a chemical reaction that stops the fire.

There are several ways in which the combustion process can be retarded by physical action:

Commonly used fire retardant additives include mixtures of huntite and hydromagnesite, aluminium hydroxide, and magnesium hydroxide. When heated, aluminium hydroxide dehydrates to form aluminum oxide (alumina, Al2O3), releasing water vapor in the process. This reaction absorbs a great deal of heat, cooling the material into which it is incorporated. Additionally, the residue of alumina forms a protective layer on the material's surface. Mixtures of huntite and hydromagnesite work in a similar manner. They endothermically decompose releasing both water and carbon dioxide,[6][7] giving fire retardant properties[8][9][10] to the materials in which they are incorporated. 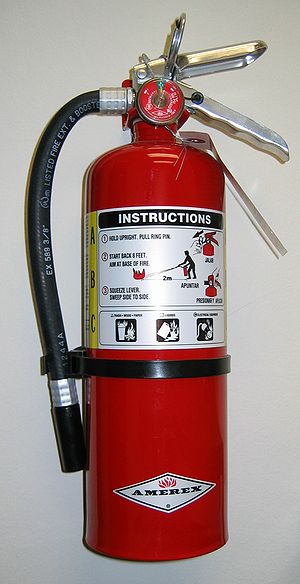 Class A foam is used as a fire retardant in 2.5 gallon [APW] and [CAFS] extinguishers to contain incipient brush fires and grass fires by creating a fire break. Other chemical retardants are capable of rendering class A material and Class B fuels non-flammable and extinguishing class A, class B, and some class D fires.[citation needed] Fire retardant slurries dropped from aircraft are normally applied ahead of a wildfire to prevent ignition, while fire suppression agents are used to extinguish fires.

It is possible to coat an object with a fire retardant. The classic example of this is the green Christmas tree. As a tree dries out it can be accidentally lit on fire putting the home at risk. A coating of a specialised fire retardant can prevent the starting of the fire and slow it down if it does start.

Many large sky-scrapers use a coating around main structural elements to prevent catastrophic weakening during a fire. It is believed that one of the reasons why the World Trade Center's twin towers in New York collapsed on 9/11 was due to the airplane impact removing portions of the fire-insulation layer.[citation needed]

Many dormitories in the US are also considering using these products. Since 2000, 109 people have died in fires in dormitories or off-campus student housing across the nation, according to Campus Firewatch, an online newsletter.

Campus Firewatch's publisher, Ed Comeau, said a January 2000 fire at Seton Hall University in New Jersey drew attention to the perils of fire on campus. A common area in a Seton Hall dorm caught fire after two students ignited a banner from a bulletin board. The fire quickly spread to furniture and killed three students and injured 58 others.[13]

Generally, fire retardants are dropped from aircraft or applied by ground crews around a wildfire's edges in an effort to contain its spread. This allows ground crews time to work to extinguish the fire. However, when needed, retardant can also be dropped directly onto flames to cool the fire and reduce flame length.[15]

Aerial firefighting is a method to combat wildfires using aircraft. The types of aircraft used include fixed-wing aircraft and helicopters. Smokejumpers and rappellers are also classified as aerial firefighters, being delivered by parachute from a variety of fixed-wing aircraft, or rappelling from helicopters. Chemicals used to fight fires may include water, water enhancers, or specially-formulated fire retardants.[16]

Most clothing intended for children in the United States is required to pass fire-retardant tests for safety reasons.

In many locations mattresses are now treated with fire retardant or built with fire-resistant material. Many new foams self-extinguish. This is the most common use of chemical fire retardancy.

Fire retardants applied to wildfires are usually a mixture of water and chemicals designed to wet the area as well as chemically retard a fire's progression through vegetation. Typically it is colored[17] so that the application area can be seen from the air. New gel-based retardants which meet NFPA Standard 1150 are being introduced into use. These are dyed other colors to differentiate them from the traditional red retardant. The gels and their dyes are designed to biodegrade naturally.[18] Phos-Chek is a brand of long-term retardant currently approved for wildland fire use.[19]

Some fire retardants contain chemicals that are potentially dangerous to the environment, such as PBDEs. Fire retardants used in airplanes and fire resistant objects such as carpets accumulate in humans. (see PBDE#Health concerns).

Forest fire retardants that are used are generally considered non-toxic,[20] but even less-toxic compounds carry some risk when organisms are exposed to large amounts.[21] Fire retardants used in firefighting can be toxic to fish and wildlife as well as firefighters[22] by releasing dioxins and furans when halogenated fire retardants are burned during fires,[23] and drops within 300 feet of bodies of water are generally prohibited unless lives or property are directly threatened.[24] The US Forest Service is the governing agency that conducts research and monitors the effect of fire retardants on wildland systems in the US.[25][26]

It was found that marine bacteria manufacture a non-synthetic source of chemically identical PBDEs that are toxic to the environment.[27]