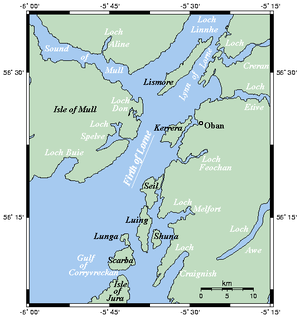 General view of the inner Firth and other nearby waterways.

The Firth of Lorn or Lorne (Gaelic: An Linne Latharnach) in origin refers to the waters off the coast of a now obsolete geopolitical region, Lorn or Lorne. A firth in Scottish English is a long estuary, the same as or similar to a fjord, although somewhat arbitrary in application. The name of Lorn descends from the proto-history of Scotland. A nineteenth-century geographical reference[1] defines it as being a district in the county of Argyllshire, where the –shire segment reflects a former political status of Argyll.

Lorn was a maritime district, located on Scotland's west coast, on the eastern shore of Loch Linnhe and the Firth of Lorn. The northern border was Loch Leven. The eastern and southern borders were the line of Loch Awe, Loch Avich, and Loch Melfort.[1] Lorne lost its geopolitical status with the passage of the Local Government (Scotland) Act 1973, effective in 1975. It had survived the same act of 1947 and again 1972, which retained most of the traditional local structure. In 1975, two Lorne's appeared, North and South, both now burghs in the county of Argyll, in the region of Strathclyde. With the abolition of the counties in 1996, Argyll and Bute and part of Dumbarton were united into the Argyll and Bute Council Area. It contains only "towns and villages." None of them are Lorn.

Lorn shattered, so to speak, under the exigencies of time and politics. The firth, however, which had long since acquired the name, remains a living concept. In 2005 much of the eastern side became a Special Area of Conservation (SAC) according to European Union's Habitats Directive. The reefs and skerries of the small islands on that side are deemed habitats of interest.[2]

Geography of the firth 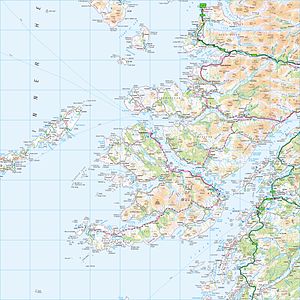 The naming of the firth after Lorn, a major province on its eastern shore, reflecting the geopolitical power distribution of the times, became less apt as Lorn receded and disappeared. Much of Lorn bordered Loch Linnhe, a fiord to the north that, for whatever reason, escaped being included in the firth. Moreover, the firth extended far to the south of Lorn. To some writers, the name was to be extended south to Colonsay, but to others it went only as far south as the Garvellachs. The official maps of the British Empire did not resolve the exact borders of the firth. Admiralty chart 2724, mapping the coast from the North Channel, places the label, “Firth of Lorn,” on only the narrowest part of the firth, leaving the reader to guess how far south it applied, and the concomitant Ordnance Survey map follows the same convention. The waters between the open Atlantic to the north of the North Channel and the named inner firth are an undefined and unnamed lagoon.

In the last two or three decades the firth has become the subject of geologic, hydrologic and biologic field studies undertaken by research organizations working for, or with the permission of, Scottish Natural Heritage (SNH), a branch of the Scottish Government, which implements the acts of the Scottish Parliament. The latter elected organization, created by popular demand, delegates some of the sovereignty of the government of Great Britain. Scotland itself is not a sovereign nation. The Scottish Parliament cannot act without approval of the central government, which it generally has. The recommendations of SNH are usually binding. It has responsibility for the study, protection, and allowed use of Scotland’s natural resources including the Firth of Lorn.

Although there is no universally binding geopolitical terminology apart from that defined by legislation, the SNH in promulgating research has in fact endorsed a more precise definition of the firth. Prior to the establishment of the SAC of 2005, the SNH was one organization of a consortium funding the Broadscale Mapping Project, 1996-1998, conducted by the SeaMap Research Group. It conducted surveys by a variety of methods, mainly electronic, mapping the presence of benthic communities in a number of areas, including the Firth of Lorn.

The report of this survey, which was instrumental in getting the SAC designated, defines the firth as follows.[3] The “Inner Firth of Lorn” is the waters directly south of the peninsula between Loch Buie and Loch Spelve on Mull and east of the peninsulas between Loch Spelve and Duart Bay. The waters around the islands on the east side of the firth are included, being in the current SAC, even though they may have their own names. The “Outer Firth of Lorn” is the waters south of the Ross of Mull as far as the west coast of the Isle of Jura. There is no indication that the Sound of Jura is to be considered in the firth, even though its northern portion was in the study area.

The inner firth's northeast end forms a junction with several other arms of the sea, namely Loch Linnhe, the Lynn of Lorne, Loch Etive, and the Sound of Mull. Loch Spelve and Loch Don on the Isle of Mull and Loch Feochan on the mainland are inlets of the Firth of Lorn. On the southeast side, there are also several channels and sounds in the Slate Islands. The Ordnance Gazetteer of 1882 cites a length of 17 miles (27 km) from the intersection of Loch Linnhe and the Sound of Mull, with widths of from 5 miles (8.0 km) to 15 miles (24 km), inclusive of the islands on the east side, such as Kerrera and the Slate Islands.[4] The west side is an ample deep-water channel leading ultimately inland to the Caledonian Canal.

Geology of the firth

The long narrow basin forming the firth is part of the Great Glen Fault, which runs through its namesake, the Great Glen, and Loch Linnhe before joining with the Firth of Lorn, whence it runs further southwest across Ireland.

Tidal conditions in and around the Firth of Lorn cause a number of phenomena, such as the Falls of Lora at the outlet of Loch Etive, and whirlpools and standing waves in the Gulf of Corryvreckan between Scarba and Jura.

The Firth of Lorne featured as the location for the boat chase near the end of the second James Bond film From Russia with Love, released in 1963. Also the islands of Easdale, Seil and Cuan sound all feature in Florence + the machines video, Queen of peace and long and lost.[5]

Major contributary waters to the firth

Islands in or adjacent to the firth