The Five Pillars of Islam (arkān al-Islām أركان الإسلام; also arkān al-dīn أركان الدين "pillars of the religion") are five basic acts in Islam, considered mandatory by believers and are the foundation of Muslim life. They are summarized in the famous hadith of Gabriel.[1][2][3][4]

The Shia and Sunni both agree on the essential details for the performance and practice of these acts,[5][6] but the Shia do not refer to them by the same name (see Ancillaries of the Faith, for the Twelvers, and Seven pillars of Ismailism). They make up Muslim life, prayer, concern for the needy, self purification and the pilgrimage,[7][8] if one is able.[9] 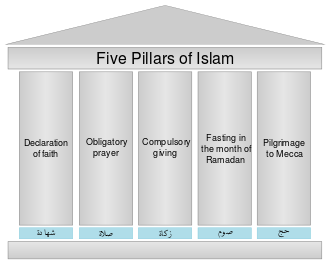 The Five Pillars of Islam 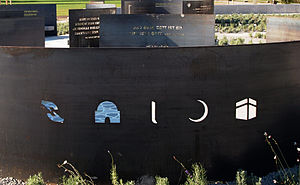 An artwork depicting the 5 pillars

Shahada is a declaration of faith and trust that professes that there is only one God (Allah) and that Muhammad is God's messenger.[10] It is a set statement normally recited in Arabic: lā ʾilāha ʾillā-llāhu muḥammadun rasūlu-llāh (لَا إِلٰهَ إِلَّا الله مُحَمَّدٌ رَسُولُ الله) "There is no god but God (and) Muhammad is the messenger of God." It is essential to utter it to become a Muslim and to convert to Islam.[11] 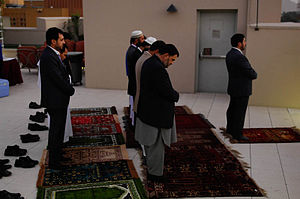 Salat (ṣalāh) is the Islamic prayer. Salat consists of five daily prayers according to the Sunna; the names are according to the prayer times: Fajr (dawn), Dhuhr (noon), ʿAṣr (afternoon), Maghrib (evening), and ʿIshāʾ (night). The Fajr prayer is performed before sunrise, Dhuhr is performed in the midday after the sun has surpassed its highest point, Asr is the evening prayer before sunset, Maghrib is the evening prayer after sunset and Isha is the night prayer. All of these prayers are recited while facing in the direction of the Kaaba in Mecca and forms an important aspect of the Muslim Ummah. Muslims must wash before prayer; this washing is called wudu ("purification"). The prayer is accompanied by a series of set positions including; bowing with hands on knees, standing, prostrating and sitting in a special position (not on the heels, nor on the buttocks). A Muslim may perform their prayer anywhere, such as in offices, universities, and fields. However, the mosque is the more preferable place for prayers because the mosque allows for fellowship.

Zakāt or alms-giving is the practice of charitable giving based on accumulated wealth. The word zakāt can be defined as purification and growth because it allows an individual to achieve balance and encourages new growth. The principle of knowing that all things belong to God is essential to purification and growth. Zakāt is obligatory for all Muslims who are able to do so. It is the personal responsibility of each Muslim to ease the economic hardship of others and to strive towards eliminating inequality.[12] Zakāt consists of spending a portion of one's wealth for the benefit of the poor or needy, like debtors or travelers. A Muslim may also donate more as an act of voluntary charity (sadaqah), rather than to achieve additional divine reward.[13]

There are five principles that should be followed when giving the zakāt: 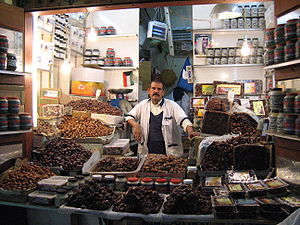 Muslims traditionally break their fasts in the month of Ramadan with dates (like those offered by this date seller in Kuwait City), as was the recorded practice (Sunnah) of Muhammad.

Three types of fasting (Siyam) are recognized by the Quran: Ritual fasting,[15] fasting as compensation for repentance (both from sura Al-Baqara),[16] and ascetic fasting (from Al-Ahzab).[17][18]

Ritual fasting is an obligatory act during the month of Ramadan.[19] Muslims must abstain from food and drink from dawn to dusk during this month, and are to be especially mindful of other sins.[19] Fasting is necessary for every Muslim that has reached puberty (unless he/she suffers from a medical condition which prevents him/her from doing so).[20]

The fast is meant to allow Muslims to seek nearness and to look for forgiveness from God, to express their gratitude to and dependence on him, atone for their past sins, and to remind them of the needy.[21] During Ramadan, Muslims are also expected to put more effort into following the teachings of Islam by refraining from violence, anger, envy, greed, lust, profane language, gossip and to try to get along with fellow Muslims better. In addition, all obscene and irreligious sights and sounds are to be avoided.[22]

Fasting during Ramadan is obligatory, but is forbidden for several groups for whom it would be very dangerous and excessively problematic. These include pre-pubescent children, those with a medical condition such as diabetes, elderly people, and pregnant or breastfeeding women. Observing fasts is not permitted for menstruating women. Other individuals for whom it is considered acceptable not to fast are those who are ill or traveling. Missing fasts usually must be made up for soon afterward, although the exact requirements vary according to circumstance.[23][24][25][26]

The Hajj is a pilgrimage that occurs during the Islamic month of Dhu al-Hijjah to the holy city of Mecca. Every able-bodied Muslim is obliged to make the pilgrimage to Mecca at least once in their life.[27] When the pilgrim is around 10 km (6.2 mi) from Mecca, he/she must dress in Ihram clothing, which consists of two white sheets. Both men and women are required to make the pilgrimage to Mecca. After a Muslim makes the trip to Mecca, he/she is known as a hajj/hajja (one who made the pilgrimage to Mecca).[28] The main rituals of the Hajj include walking seven times around the Kaaba termed Tawaf, touching the Black Stone termed Istilam, traveling seven times between Mount Safa and Mount Marwah termed Sa'yee, and symbolically stoning the Devil in Mina termed Ramee.[28]

The pilgrim, or the haji, is honoured in the Muslim community. Islamic teachers say that the Hajj should be an expression of devotion to God, not a means to gain social standing. The believer should be self-aware and examine their intentions in performing the pilgrimage. This should lead to constant striving for self-improvement.[29] A pilgrimage made at any time other than the Hajj season is called an Umrah, and while not mandatory is strongly recommended. Also, they make a pilgrimage to the holy city of Jerusalem in their alms-giving feast.

Twelver Shia Islam has five Usul al-Din and ten Furu al-Din, i.e., the Shia Islamic beliefs and practices. The Twelver Shia Islam Usul al-Din, equivalent to a Shia Five Pillars, are all beliefs considered foundational to Islam, and thus classified a bit differently from those listed above.[30] They are:

In addition to these Five Pillars, there are ten practices that Shia Muslims must perform, called the Ancillaries of the Faith[31] (Arabic: furūʿ al-dīn).

Ismailis have their own pillars which are as follows: