Flag of the Soviet Union

From Infogalactic: the planetary knowledge core
Jump to: navigation, search
"Flag of the USSR" redirects here. For other uses, see Flag of the USSR (disambiguation).

The flag of the Soviet Union was the official national flag of the Soviet state from 1923 to 1991. The flag's design and symbolism are derived from the Russian Revolution. The flag is also an international symbol of the communist movement as a whole.

The design is a solid field of red adorned with a unique gold emblem in the upper hoist quarter. The red flag was a traditional revolutionary symbol long before 1917, and its incorporation into the flag paid tribute to the international aspect of workers' revolution. The iconic hammer and sickle design was a modern touch – the union of the hammer (workers) and the sickle (peasants) represents the victorious and enduring revolutionary alliance. The famous emblem is topped by an inconspicuous red star representing the rule of the Communist Party.

The first flag with the red star, hammer and sickle was adopted on 13 November 1923. In 1955, a statute on the flag was adopted which resulted in a change of the hammer's handle length and the shape of the sickle. A final modification to the flag was adopted in 1980 in which the colour was brightened to a lighter shade of red. The flag continued to be the official national flag until the dissolution of the Soviet Union.

The colour red has always been a positive symbol in the Russian culture. The word red (Russian: красный, krasnyy) is etymologically related with the Russian word for beautiful. This can also be seen in Moscow’s Red Square and the Russian Orthodox festivity, Red Easter.

The red field symbolises the blood that has been spilled by workers and farmers in their struggle for emancipation. It honours the red flag of the Paris Commune of 1871. The ideology of communism can be seen from the flag. The red star and hammer and sickle are themselves symbols of communism and socialism. The flag of the Soviet Union consisted of a plain red flag with a gold hammer crossed with a gold sickle which are placed beneath of a gold-bordered red star. This symbol is then placed in the upper left canton of the red flag.

The hammer symbolises urban industrial workers while the sickle symbolises agricultural workers (peasants)—who together, as the Proletarian class, form the state. The red star represents the Communist Party, and its position over hammer and sickle symbolises its leading role in socialist society to unify and enlighten the workers and peasants in the building of communism. The back side of the flag is officially just red, without the symbols. However, in practice, the flag was usually made through and through and thus the symbols usually appeared on the reverse side and in the reverse order.[2]

Construction sheet for the national flag from the 1955 law.

The flag's design was legislated in 1955, which gave a clear way to define and create the flag. This resulted in a change of the hammer's handle length and the shape of the sickle. The adopted statute stated that:[3]

The final design of the flag was adopted in 1980. The design was kept the same except that the background colour was changed. The color was brightened from a near-burgundy crimson to a light to medium red.[citation needed] That flag remained the national flag of the Soviet Union up until late 1991, when a tri-color was formally adopted by the Russian SFSR. 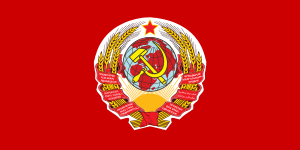 Last Soviet flag: 1:2 ratio
August 15, 1980—December 25, 1991
File:Flag of the Soviet Union Backside.svg
Backside of the flag. In practice, however, flags were usually made through and through and the hammer and sickle was often featured on both sides.

During the establishment of the Russian SFSR, Vladimir Lenin and his colleagues had considered the inclusion of a sword symbol in addition to the hammer and sickle as part of the state seal on which the flag was eventually based. The idea was dismissed as too visually aggressive. Lenin apparently said "A sword is not our symbol."[4]

The first official flag was adopted in December 1922 at the First Congress of Soviets of the USSR. It was agreed that the red banner 'was transformed from the symbol of the Party to the symbol of a state, and around that flag gathered the peoples of the soviet republics to unite into one state — the Union of Soviet Socialist Republics'. On 30 December 1922, the Congress adopted a Declaration and Agreement on the establishment of the USSR. Article 22 of the Agreement states: 'the USSR has a flag, coat of arms and a state seal.' The description of the first flag was given in the 1924 Soviet Constitution, accepted in the second session of the Executive Committee (CIK) of the USSR on 6 July 1923. The text of article 71 states: 'The state flag of the Union of Soviet Socialist Republics consists of a red or scarlet field with states coat of arms'. It was ordered with the unusual ratio of 4:1 in proportion and consisted of a red flag with the state coat of arms in the center. However, such a flag was never mass-produced. This flag was the official flag for four months, and was replaced as the official flag by the more familiar hammer and sickle design during the third session of the CIK of the USSR on 12 November 1923.

In the third session of the CIK of the USSR, the description of Soviet flag in the Constitution was changed, and article 71 was edited to be: 'The state flag of the Union of Soviet Socialist Republics consists of a red or scarlet field, and in the canton a golden sickle and hammer, and a red five-pointed star bordered in gold above them. The ratio of width to length is 1:2.' On 19 August 1955 "Statute on the State Flag of the Union of Soviet Socialist Republics" was adopted by a decision of the Presidium of the Supreme Soviet of the USSR. This resulted in a change of the hammer's handle length and the shape of the sickle. A final modification to the flag was adopted on 15 August 1980, which changed the flag field into a bright red. These modifications stayed into use until the disintegration of the USSR on 25 December 1991, at which time the flag ceased to be a national flag.

Similarities with other flags

On 15 April 1996 Boris Yeltsin signed a presidential decree giving the Soviet flag (called the Victory Banner, after the banner that was raised above the Reichstag on 1 May 1945) status similar to that of the national flag. The difference is that the hammer and sickle has been removed from the flag. On certain holidays, the Victory Banner is flown along with the Russian flag.