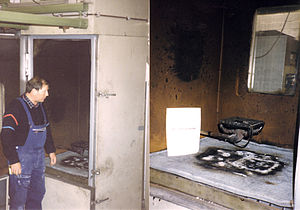 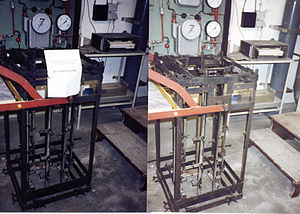 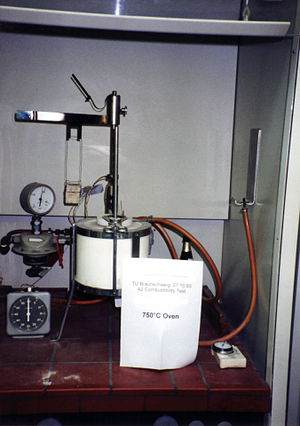 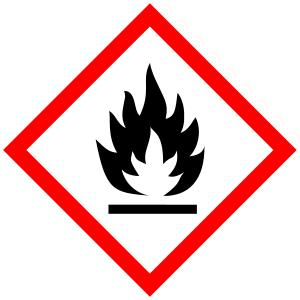 The international pictogram for flammable chemicals.

Flammability is the ability of a substance to burn or ignite, causing fire or combustion. The degree of difficulty required to cause the combustion of a substance is quantified through fire testing. Internationally, a variety of test protocols exist to quantify flammability. The ratings achieved are used in building codes, insurance requirements, fire codes and other regulations governing the use of building materials as well as the storage and handling of highly flammable substances inside and outside of structures and in surface and air transportation. For instance, changing an occupancy by altering the flammability of the contents requires the owner of a building to apply for a building permit to make sure that the overall fire protection design basis of the facility can take the change into account.

Historically, flammable, inflammable and combustible meant capable of burning.[1] The word "inflammable" came through French from the Latin inflammāre = "to set fire to," where the Latin preposition "in-"[2] means "in" as in "indoctrinate", rather than "not" as in "invisible" and "ineligible".

Flammable is used for materials which ignite more easily than other materials thus is more dangerous and more highly regulated. Less easily ignited or which burn less vigorously are combustible. For example, in the United States flammable liquids by definition they have a flash point below 100 °F (38 °C) where combustible liquids have a flash point above 100 °F (38 °C). "Flammable solids are solids that are readily combustible, or may cause or contribute to fire through friction. Readily combustible solids are powdered, granular, or pasty substances which are dangerous if they can be easily ignited by brief contact with an ignition source, such as a burning match, and if the flame spreads rapidly."[6] The technical definitions vary between countries so the United Nations created the Globally Harmonized System of Classification and Labelling of Chemicals which defines the flash point temperature of flammable liquids to be between 0 and 140 °F (60 °C) and combustible liquids between 140 °F (60 °C) and 200 °F (93 °C).[6]

A fire test can be conducted to determine the degree of flammability. Test standards used to make this determination but are not limited to the following:

Materials can be tested for the degree of flammability and combustibility in accordance with the German DIN 4102. DIN 4102, as well as its British cousin BS 476 include for testing of passive fire protection systems, as well as some of its constituent materials.

The following are the categories in order of degree of combustibility as well as flammability:

A more recent industrial standard is the European EN 13501-1 - Fire classification of construction products and building elements - which roughly replaces A2 with A2/B, B1 with C, B2 with D/E and B3 with F.

B3 or F rated materials may not be used in building unless combined with another material which reduces the flammability of those materials.

A material's flash point is a metric of how easy it is to ignite the vapor of the material as it evaporates into the atmosphere. A lower flash point indicates higher flammability. Materials with flash points below 100 °F (38 °C) are regulated in the United States by OSHA as potential workplace hazards.

Flammability of furniture is of concern as cigarettes and candle accidents can trigger domestic fires. In 1975, California began implementing Technical Bulletin 117 (TB 117), which required that materials such as polyurethane foam used to fill furniture be able to withstand a small open flame, equivalent to a candle, for at least 12 seconds.[7] In polyurethane foam, furniture manufacturers typically meet TB 117 with additive halogenated organic flame retardants. Although no other U.S. states had similar standards, because California has such a large market manufacturers meet TB 117 in products that they distribute across the United States. The proliferation of flame retardants, and especially halogenated organic flame retardants, in furniture across the United States is strongly linked to TB 117. When it became apparent that the risk-benefit ratio of this approach was unfavorable and industry had used falsified documentation (i.e. see David Heimbach) for the use of flame retardants, California modified TB 117 to require that fabric covering upholstered furniture meet a smolder test replacing the open flame test.[8] Gov. Jerry Brown signed the modified TB117-2013 which became effective in 2014.[9]

Flammable substances include, but are not limited to:

The US Government uses the Hazardous Materials Identification System (HMIS) standard for flammability ratings, as do many US regulatory agencies, and also the US National Fire Protection Association (NFPA).

The ratings are as follows:

For existing buildings, fire codes focus on maintaining the occupancies as originally intended. In other words, if a portion of a building were designed as an apartment, one could not suddenly load it with flammable liquids and turn it into a gas storage facility, because the fire load and smoke development in that one apartment would be so immense as to overtax the active fire protection as well as the passive fire protection means for the building. The handling and use of flammable substances inside a building is subject to the local fire code, which is ordinarily enforced by the local fire prevention officer.