From Infogalactic: the planetary knowledge core
Jump to: navigation, search
For other uses, see Admiral of the fleet. 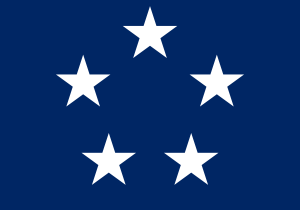 Flag of the fleet admiral of the United States Navy.

Fleet Admiral (FADM)[1] was a five-star flag officer rank in the United States Navy and was, in its time, the highest rank attainable in the service. Fleet admiral ranked immediately above admiral and was equivalent to general of the Army and General of the Air Force.

The fleet admiral rank was created by Congress to be granted to four people during the World War II era. There has been no authorization to use the rank since. Mistakenly, many believe that the rank is still in existence but reserved for wartime use (this error even appears on some official rank charts), though no legal provisions ever existed for its use other than for the four officers appointed to it.[citation needed]

The insignia for a fleet admiral was composed of five silver stars in a pentagonal design. Worn on the service dress uniform sleeve was a gold stripe two inches wide surrounding the sleeve two inches from the cuff with four half-inch stripes placed at 1/4 inch intervals. The single gold five-pointed star, one ray down, worn above the top stripe was not part of the rank per se but indicated the wearer to be a line officer.

The United States rank of fleet admiral was created by an Act of Congress for four officers to hold on a temporary basis under Pub.L. 78-482 on December 14, 1944.[2] The rank was made permanent for the four individual holders by Pub.L. 79–333 on March 23, 1946, but that law made no provision to establish the rank itself permanently.[3] Although Congress authorized the promotion of Omar Bradley to the five star rank of general of the Army in 1950 while serving as Chairman of the Joint Chiefs of Staff so that he would be of the same rank as General of the Army Douglas MacArthur, the theater commander in Korea, there has been no new legislation authorizing the use of the rank of fleet admiral since 1946.

It was held during and after World War II by the following officers:

A close contender to receive the rank of fleet admiral was Admiral Raymond A. Spruance. However, U.S. Representative Carl Vinson, a strong supporter of Admiral Halsey, reportedly blocked the final promotion of Spruance to fleet admiral on several occasions.[citation needed] However, Congress then responded by passing an Act of Congress, unprecedented for an individual, that stated that Admiral Spruance would receive a full four-star admiral's salary during the remainder of his life.

According to Public Law 78-482, fleet admirals on active duty receive the same pay as a rear admiral, upper half (two star) plus a $5,000 personal allowance, and upon retirement were to receive 75% of their active duty pay.[4] When Public Law 79-333 made the rank permanent for Leahy, King, Nimitz, and Halsey, it also provided for full pay and allowances once those officers retired.[5]

Admiral of the Navy

In 1903, a special rank of Admiral of the Navy, was conferred upon Admiral George Dewey following the Spanish–American War (1898) but it ceased to exist after his death on 16 January 1917. When the rank of Fleet Admiral was created, the Navy declared that George Dewey was senior to the newly promoted five star officers, but did not state that Admiral of the Navy was a six star rank. Since there was never a scenario where Fleet Admiral and Admiral of the Navy were active ranks concurrently, the Navy drew no equivalence or relationship of seniority between the two. The Department of the Navy did briefly consider the possibility of a "six-star admiral" rank during World War II, mainly in the event that Douglas MacArthur be promoted to General of the Armies, and the need to provide a similar rank to a Navy officer. However, as MacArthur's promotion was never approved, the Navy dropped the idea for a new version of Admiral of the Navy with no such proposals issued since.