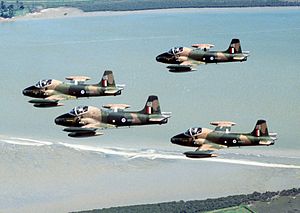 A flight of four RNZAF Strikemasters

A flight is a military unit in an air force, naval air service, or army air corps. It is usually composed of three to six aircraft, with their aircrews and ground staff; or, in the case of a non-flying ground flight, no aircraft and a roughly equivalent number of support personnel. In most usages, multiple flights make up a squadron. The "flight" is also a basic unit for intercontinental ballistic missiles. The French equivalent is an "escadrille".

The use of the term "flight" to describe a collection of aircraft (typically four in the early days of aviation) dates back to around 1912. Winston Churchill claimed to have invented the term while he was learning to fly with the Royal Navy's embryonic air service. It has also been suggested that the term was coined by technical sub-committee of the Committee of Imperial Defence which was examining the British air arrangements around the same time.[1]

In the United Kingdom Royal Air Force and the air forces of the Commonwealth, from where much air force terminology emanated, an aircraft flight, in the first decades of air forces, was commanded by a flight lieutenant, a rank equivalent to captain in armies and other air forces, or a naval lieutenant. More recently, however, it has become common for a flight to be led by a squadron leader—a formal rank distinct from a squadron commander—equivalent to an army major or naval lieutenant commander.

A flight is usually divided into two sections, each containing two to three aircraft, which share ground staff with the other section, and are usually commanded by a flight lieutenant.

The Royal Navy's Fleet Air Arm, the Army Air Corps, and other Commonwealth naval and army aviation arms also have flights. In the Fleet Air Arm a flight could be as few as 1 helicopter operating from a smaller ship.[citation needed]

An air force ground flight is roughly equivalent to an army platoon and may be commanded by a flight lieutenant, flying officer, pilot officer, or warrant officer. A flight is also a basic unit of guided missiles, such as surface-to-air missiles. These ground flights may carry out operational roles (such as air traffic control, airfield defence or firefighting), engineering roles (such as aircraft or ground systems maintenance), medical, dental, and legal units, or purely administrative roles, such as finance, infrastructure or human resource management.

The United States Air Force (USAF) has three types of flights: numbered, alphabetic, and aircraft (which may be designated by alpha/numerics or name).

A numbered flight is a unit with a unique base, wing, group, or Numbered Air Force mission, such as training or finance, though not large enough to warrant designation as a squadron. Numbered flights are uncommon, and are usually only found in basic training facilities.

An alphabetic flight is an operational component of a flying or ground squadron, not an independent unit; alphabetic flights within a squadron normally have identical or similar functions and are normally designated A, B, C and so on within the squadron. Flights in the USAF are generally authorized to have between 20 and 100 personnel, and are normally commanded by a company-grade officer (lieutenant or captain) and/or a flight chief, usually a senior noncommissioned officer with the rank of master sergeant or senior master sergeant.

In Minuteman intercontinental ballistic missile units of the U.S. Air Force, a flight is composed of ten unmanned launch facilities remotely controlled by a manned launch control center, containing two personnel. Five of these flights make up one missile squadron. The Air Force has a total of 45 ICBM missile flights.

(In US Army Aviation the equivalent organizational level of a flight is called a "platoon," while in US Naval Aviation the "flight" is known as a "division.")

Under US military and FAA common usage, for air traffic control and separation purposes, a "flight" of aircraft is simply two or more aircraft intentionally operating in close proximity to each other under a designated "flight leader" without regard to military organizational hierarchy. For example, the division leader of a flight of seven USMC KC-130's may check in with the Air Route Traffic Control Center with, "Good morning, Atlanta Center, Otis 08, flight of seven KC-130's, Flight Level 230." Which would simply confirm to the controller that the large blip on his radar screen, squawking a discrete code, and indicating FL230, was indeed the gaggle of Battle Hercs from MCAS Cherry Point that were just handed off to him/her from Washington Center; he/she doesn't really care that they are actually a "division" of aerial refuelers from VMGR-252, but rather that they are a collection, viz, "flight" of airplanes flying together under a common leader.