From Infogalactic: the planetary knowledge core
(Redirected from Flight Lieutenant)
Jump to: navigation, search
This article is about the air force rank. For the film, see Flight Lieutenant (film). 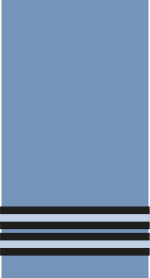 Flight lieutenant (Flt Lt in the RAF and IAF; FLTLT in the RAAF and RNZAF; formerly sometimes F/L in all services) is a junior commissioned air force rank which originated in the Royal Naval Air Service and continues to be used in the Royal Air Force[1] and many other countries, especially in the Commonwealth. It is also sometimes used as the English translation of an equivalent rank in non-English-speaking countries, especially those which have an air force-specific rank structure.

Flight lieutenant ranks above flying officer and below squadron leader. The name of the rank is the complete phrase; it is never shortened to "lieutenant".

Usage in the RAF

In RAF informal usage, a flight lieutenant is sometimes referred to as a "flight lieuy".

In the Air Training Corps, a flight lieutenant is usually the officer commanding of a squadron.[citation needed] Retired flight lieutenants are the first rank that may continue to use their rank after they have left active service.[3]

The rank insignia consists of two narrow blue bands on slightly wider black bands. This is worn on both the lower sleeves of the tunic or on the shoulders of the flight suit or the casual uniform. The rank insignia on the mess uniform is similar to the naval pattern, being two band of gold running around each cuff but without the Royal Navy's loop. Unlike senior RAF officers, flight lieutenants are not entitled to fly a command flag under any circumstances.

The Royal Canadian Air Force used the rank until 1968, when the three armed services were unified and army-type ranks were adopted; flight lieutenants became captains. In official French Canadian usage, a flight lieutenant's rank title was capitaine d'aviation. Up until the late 1970s, the Royal Malaysian Air Force used the rank. Thereafter the rank of captain was used instead. 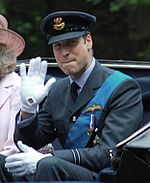