The Flint Hills historically known as Bluestem Pastures or Blue Stem Hills,[2] is a region in eastern Kansas and north-central Oklahoma named for the abundant residual flint eroded from the bedrock that lies near or at the surface. It consists of a band of hills stretching from Kansas to Oklahoma, extending from Marshall and Washington counties in the north to Cowley County, Kansas and Kay and Osage counties in Oklahoma in the south, to Geary and Shawnee counties west to east.[3] Oklahomans generally refer to the same geologic formation as the Osage Hills or "The Osage."

The Flint Hills Ecoregion is designated as a distinct region because it has the most dense coverage of intact tallgrass prairie in North America. Due to its rocky soil, the early settlers were unable to plow the area, resulting in the predominance of cattle ranches, which are in turn largely benefited by the tallgrass prairie.

The Flint Hills Discovery Center, a science and history museum focusing on the Flint Hills, opened in Manhattan, Kansas, in April 2012. 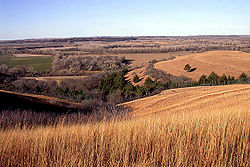 File:Konza Prairie Trail Fall 1.jpg
A walking trail in the Konza Prairie shows the height of the grasses in the fall.

Explorer Zebulon Pike first coined the name the Flint Hills in 1806 when he entered into his journal, "passed very ruff flint hills". The underlying bedrock of the hills is a flinty limestone. The largest town in the area is Manhattan, Kansas, and the hills can be accessed from the Flint Hills Scenic Byway, which passes through in Kansas.

The rocks exposed in the Flint Hills were laid down approximately 250 million years ago during the Permian Period. During this time much of the Midwest, including Kansas and Oklahoma, were covered with shallow seas. As a result, much of the Flint Hills are composed of limestone and shale with plentiful fossils of prehistoric sea creatures. The most notable layer of chert-bearing limestone is the Florence Limestone Member, which is approximately 45 feet thick. Numerous roadcuts of the Florence Member are prominent along Interstate 70 in Riley County, Kansas. Unlike the Pennsylvanian limestones to the east, however, many of the limestones in the Flint Hills contain numerous bands of chert, or flint. Because chert is much less soluble than the limestone around it, the weathering of the limestone has left behind a clay soil with abundant chert gravel. Most of the hilltops in this region are capped with this chert gravel.

The highest point in the Flint Hills is Butler County High Point, with an elevation of 1680 feet (512 meters).[4]

The EPA and the World Wildlife Fund have designated the Flint Hills as an ecoregion, distinct from other grasslands of the Great Plains.[5][6]

Beginning in the mid-19th century, homesteaders replaced the American Indians in the Flint Hills. Due to shallow outcroppings of limestone and chert, corn and wheat farming were not practical over much of the area and cattle ranching became the main agricultural activity in the region. Therefore, not having been ploughed over and still sparsely developed today, the Flint Hills represent the last expanse of intact tallgrass prairie in the nation and the best opportunity for sustained preservation of this unique habitat that once covered the Great Plains. Most of the plains, such as the Central tall grasslands to the north, have better soil than the Flint Hills and had a richer plant cover but have almost entirely been converted to farmland.[3] Tallgrass prairie is regularly renewed by fire and grazing, which also keep back the growth of trees and shrubs. Prominent grass species are big bluestem (Andropogon gerardi), switchgrass (Panicum virgatum) and Indian grass (Sorghastrum nutans).

Animals of the grassland include the American bison, which once grazed the area in their millions were almost entirely exterminated and have now been reintroduced. The elk that also once roamed the area are now gone.

There are four tallgrass prairie preserves in the Flint Hills, the largest of which, the Tallgrass Prairie Preserve, (the former Barnard Ranch) in the Osage Hills near Pawhuska, Oklahoma, also boasts a large population of bison and is an important refuge for other wildlife such as the Greater prairie chicken (Tympanuchus cupido). The other preserves, all located in Kansas, are the 17-square-mile (44 km2) Tallgrass Prairie National Preserve in northern Chase County, Kansas near Strong City,[7][8] the Flint Hills Tallgrass Prairie Preserve east of Cassoday, "the Prairie Chicken Capital of the World",[9] and the Konza Prairie which is managed as a tallgrass prairie biological research station by Kansas State University.