Florence is the county seat of Lauderdale County, Alabama, United States, in the northwestern corner of the state.

Florence is the largest and principal city of the Metropolitan Statistical Area known as "The Shoals" (which includes Muscle Shoals, Sheffield, and Tuscumbia metropolitan areas in Colbert and Lauderdale counties). Florence is considered the primary economic hub of northwestern Alabama.

Florence is renowned for its annual tourism events, including W.C. Handy Music Festival in the summer, and the Renaissance Faire in the fall. Landmarks in Florence include the Rosenbaum House, the only Frank Lloyd Wright-designed home located in Alabama.

The type of municipal government is mayor-council.

Florence is located at Lua error in Module:Coordinates at line 668: callParserFunction: function "#coordinates" was not found..[3]

According to the U.S. Census Bureau, Florence has a total area of 25.0 square miles (65 km2), of which 24.9 square miles (64 km2) is land, and 0.1 square miles (0.26 km2) (0.40%) is water. Florence is located on Wilson Lake and Pickwick Lake, bodies of water on the Tennessee River dammed by Pickwick Dam and Wilson Dams. Pickwick Lake was created by the Tennessee Valley Authority (TVA), one of several alphabet agencies of President Franklin Delano Roosevelt's New Deal. Wilson Dam (currently operated by the TVA) was authorized by President Woodrow Wilson in 1918 and was the first dam constructed on the Tennessee River.

Florence was surveyed for the Cypress Land Company in 1818 by Italian surveyor Ferdinand Sannoner, who named it after Florence, the capital of the Tuscany region of Italy.[4] Florence, Alabama was incorporated in 1826.[5]

Whereas according to the 2010 census Bureau: 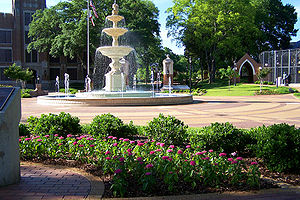 Situated in Florence, and founded in 1830 as LaGrange College, the University of North Alabama, a public, co-educational, higher education institution, is Alabama's oldest state-certified university. The University is the largest in north Alabama[citation needed], with an enrollment topping 7,000 for the first time in 2007. Culturally diverse, international students now comprise roughly 10% of the student population. The University is known for its beautifully landscaped, pedestrian-friendly campus that is situated on 130 acres (0.53 km2) and surrounded by historic neighborhoods. It is located just north of the downtown business district.

Florence City Schools is the organization of the K-12 public school system. Florence High School (grades 10-12) is the main high school, with an enrollment of approximately 1,000 students. It was created by a merger between the previous two city high schools, Bradshaw High School and Coffee High School. Florence High is located at the former Bradshaw site in the eastern part of the city. The merger also led to the creation of Florence Middle School (grades 7-8) and the Florence Freshman Center (grade 9), The middle school is located at the former Coffee High campus, east of downtown and a new facility was added to the property of the high school campus which is now the new Florence Freshman Center.

The city has a mayor-council form of government. Council members are elected from six single-member districts, and the mayor is elected separately.

The City of Florence is home to several museums, historical sites and numerous parks to serve the cultural and recreational needs of citizens and tourists. A variety of festivals also occur throughout the year.

The festivals are listed in order by month that the event falls on the calendar. 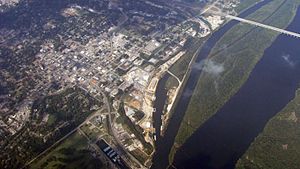 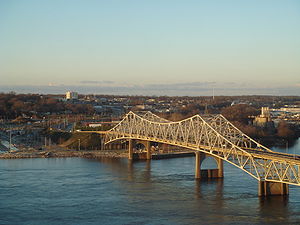 O'Neal Bridge over the Tennessee River

Florence is the merger point for two major U.S. Highways, as well as several Alabama Highways. Both U.S. Highway 43 and U.S. Highway 72 merge just east of the city limits in Killen, and are co-signed their entire length through the city. Highway 43, running north and south, helps connect the city to Lawrenceburg and Columbia to the north in Tennessee, as well as Tuscaloosa and Mobile to the south. Highway 72 helps connect the city to Huntsville and Chattanooga, Tennessee to the east and Memphis, Tennessee to the west. Interstate 65 is accessible about forty-five minutes east on Highway 72. Both of these roads cross the Tennessee River on O'Neal Bridge, connecting Florence to Sheffield.

Alabama state highways that serve the city include Alabama 13, Alabama 17, Alabama 20, Alabama 133, and Alabama 157. Alabama 133 connected Florence and Muscle Shoals via Wilson Dam until 2002, when the new six-lane "Patton Island Bridge" (the unofficial, but locally accepted name) finished construction. The bridge is part of a new corridor that will eventually see the widening of Wilson Dam Road in Muscle Shoals to Alabama 20, and the construction of a new road from the bridge to Florence Blvd. in Florence. Alabama 157 is also an important road to Florence and the Shoals area, serving as a four-lane link to Interstate 65 in Cullman. After many years of political campaigning by local leaders to have the four-laning of the road completed, the project wrapped up in the summer of 2007. The road is known as the "University of North Alabama Highway".

Florence and the Shoals area does not have a direct link to an Interstate highway at the present time. One solution discussed over the years has been the "Memphis to Atlanta Highway", proposed to connect the two cities via a freeway through north Alabama. However, in recent years Mississippi has concentrated its funding on U.S. 78 (future Interstate 22), also known as "Corridor X". Though U.S. 72 through Mississippi is four lanes, there are no plans to upgrade it to freeway status. Meanwhile, the state of Georgia has also not committed to the necessary work to connect the freeway from the Alabama state line to Atlanta. The highway remains in the planning stages with the Alabama Department of Transportation.

Another plan recently discussed is extending Interstate 565 west from its current terminus just outside Decatur, perhaps along Alabama 20/Alternate U.S. 72. The plan has received some support from Decatur officials, some of whom would like to see the Interstate eventually extend west of Decatur and at least into Lawrence County.

For air transportation, Florence is served by the Northwest Alabama Regional Airport in Muscle Shoals. The airport is now solely used for general aviation, since daily flights to Atlanta ceased in early 2014. Huntsville International Airport, offering service to eleven domestic destinations, is about an hour′s drive from Florence.

Local industry is also served by the Tennessee Southern Railroad (TSRR), which runs from Florence to Columbia, Tennessee, and the Port of Florence on Pickwick Lake.

The TimesDaily is a daily newspaper published in Florence that serves the greater Florence area, and which is owned by the Tennessee Valley Printing Company, who purchased the newspaper and associated media from The New York Times Company in March, 2009.[13]

The Shoals Insider is a local news website. It is much like a newspaper, but doesn't print on paper. Local arrest records, foreclosures, divorces and other public documents are published daily, as well as news articles. [2]

The Courier-Journal is a locally owned and distributed weekly publication serving the greater Florence area.

SET Magazine is a publication of Listerhill Credit Union. It is a youth-initiative magazine, published monthly, written by young people for young people. [4]

There are numerous radio, television and low-power FM radio stations and translators that serve Florence and the greater area, all which are in the greater Florence MSA.

The climate in this area is characterized by hot, humid summers and generally mild to cool winters. According to the Köppen Climate Classification system, Florence has a humid subtropical climate, abbreviated "Cfa" on climate maps.[14]

While Florence is almost 300 miles (480 km) from the Gulf of Mexico, strong hurricanes have brought severe weather to the area. For example, in 2005, the path of Hurricane Katrina came very close to the city, causing nearly 70 mph (112 kph) winds and some storm damage.