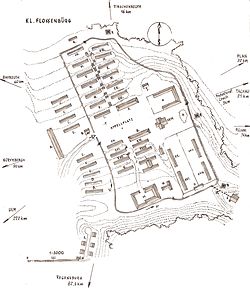 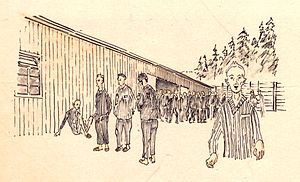 "In front of block 23" - drawing by Stefan Kryszak 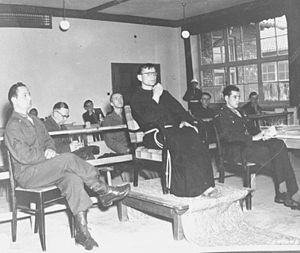 Father Lelere, a former prisoner, testifies at the trial of former camp personnel on 21 June 1946 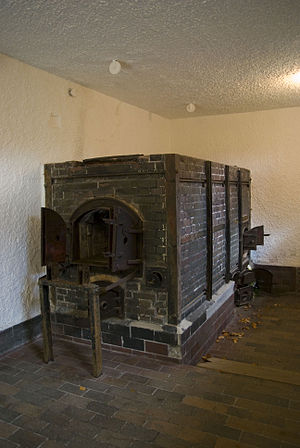 Konzentrationslager Flossenbürg was a Nazi concentration camp built in May 1938 by the Schutzstaffel (SS) Economic-Administrative Main Office at Flossenbürg, in the Upper Palatinate region of Bavaria, Germany, near the border with Czechoslovakia. Until its liberation in April 1945, more than 96,000 prisoners passed through the camp, around 30,000 of whom died there.[1]

Before World War II, Flossenbürg was a men's camp primarily for "antisocial" or "criminal" prisoners. The camp's site was chosen so that the inmates could be used as slave labor to quarry the granite found in the nearby hills. The quarries belonged to the SS-owned and -operated German Earth and Stone Works (DEST) company. On March 24, 1938, SS authorities determined a site near the small town of Flossenbürg to be suitable for the establishment of a concentration camp due to its potential for extracting granite for construction purposes.

During World War II, most of the inmates sent to Flossenbürg, or to one of about 100 sub-camps, came from the German-occupied eastern territories. The inmates in Flossenbürg were housed in 16 huge wooden barracks, its crematorium was built in a valley straight outside the camp. In September 1939, the SS transferred 1,000 political prisoners to Flossenbürg from Dachau.

There were over 4,000 prisoners in the main camp of Flossenbürg in February 1943. More than half of these prisoners were political prisoners (mainly Soviet, Czech, Dutch, and German). Almost 800 were German criminals, more than 100 were homosexuals, and 7 were Jehovah's Witnesses.

During the war, prisoner forced labor became increasingly important in German arms production. As a result, the Flossenbürg camp system expanded to include approximately 100 subcamps concentrated mainly around armaments industries in southern Germany and western Czechoslovakia.

On 1 September 1944, Flossenbürg became a training camp for extremely large numbers of female guards (Aufseherinnen) who were recruited by force from factories all over Germany and Poland. All together, over 500 women were trained in the camp and in time went on to its subcamps. Women matrons staffed the Flossenbürg subcamps, such as Dresden Ilke Werke, Freiberg, Helmbrechts, Holleischen, Leitmeritz, Mehltheuer, Neustadt (near Coburg), Nürnberg-Siemens, Oederan, and Zwodau, and it is known that six SS women (SS-Helferinnenkorps) staffed the Gundelsdorf subcamp in Czechoslovakia.

By 1945, there were almost 40,000 inmates held in the whole Flossenbürg camp system, including almost 11,000 women. Inmates were made to work in the Flossenbürg camp quarry and in armaments making. Underfeeding, sickness, and overwork were rife among the inmates. Combined with the harshness of the guards, this deliberate maltreatment killed many thousands of inmates.[2]

It is estimated that between April 1944 and April 1945, more than 1500 death sentences were carried out there. To this end, six new gallows hooks were installed. In the last months the rate of daily executions overtook the capacity of the crematorium. As a solution, the SS began stacking the bodies in piles, drenching them with gasoline, and setting them alight. Incarcerated in what was called the "Bunker," those who had been condemned to death were kept alone in dark rooms with no food for days until they were executed.

Amongst the Allied military officers executed at Flossenbürg were Special Operations Executive (SOE) agent Gustave Daniel Alfred Biéler (executed 6 September 1944). As Germany's defeat loomed, a number of the SOE agents whom the SS had tortured repeatedly in order to extract information, were executed on the same day. On 29 March 1945 13 SOE agents were hanged, including Jack Charles Stanmore Agazarian. Together with his deputy General Hans Oster, military jurist General Karl Sack, theologian Rev. Dietrich Bonhoeffer[3] and Ludwig Gehre, Wilhelm Canaris was humiliated before witnesses and then executed on April 9, 1945. At the time of his execution, Canaris had been decorated with the Iron Cross First and Second Class, the Silver German Cross, the Cross of Honor and the Wehrmacht's Twelve and Twenty-Five Year Long-Service Ribbons. On 1 August 2007 a memorial was unveiled at Flossenbürg to the memory of the seven members of the German resistance who had conspired to assassinate Hitler and who were executed on April 9, 1945. 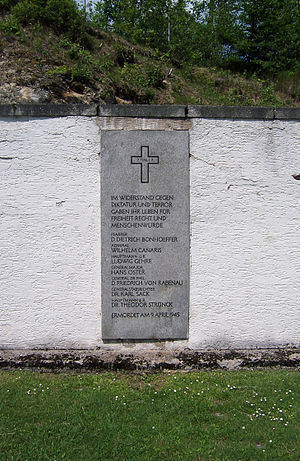 Memorial to members of German resistance executed on 9 April 1945

In early April 1945, as American forces were approaching the camp, the SS staged a perfunctory "trial" and executed General Hans Oster, Admiral Wilhelm Canaris, Rev. Dr. Dietrich Bonhoeffer, Dr. Karl Sack, Dr. Theodor Strünck and General Friedrich von Rabenau, who were involved in the 20 July plot against Adolf Hitler or previous plots against Hitler, along with the French Resistance worker Simone Michel-Lévy, who had managed to organize an uprising in the camp. On 20 April 1945, they began the forced evacuation of 22,000 inmates, including 1,700 Jews, leaving behind only those too sick to walk. On the death march to the Dachau concentration camp, SS guards shot any inmate too sick to keep up.[5] Before they reached Dachau, more than 7,000 inmates had been shot or had collapsed and died.

By the time the U.S. Army freed the camp on April 23, 1945, more than 30,000 inmates had died at Flossenbürg. Troops from the 2nd Cavalry Group, Mechanized,[6] the 90th Infantry Division and the 97th Infantry Division[7][8] found about 1,600 ill and weak prisoners, mostly in the camp's hospital barracks. Members of the army's Counter-Intelligence Corps, including Ib Melchior,[9] Anthony Hecht[10] and Robie Macauley,[11] conducted extensive interviews with survivors to gather evidence for the 1946 Flossenbürg War Crimes Trial. 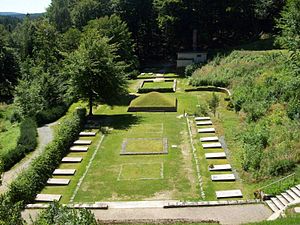 Tal des Todes (Valley of the Dead) with memorials

An American military tribunal tried 46 former staff from Flossenbürg concentration camp for crimes of murder, torturing, and starving the inmates in their custody. All but 5 of the defendants were found guilty, 15 of whom were condemned to death, 11 were given life sentences, and 14 were jailed for terms of 1 to 30 years.

On 22 July 2007, the sixty-second anniversary of the camp's liberation, a Holocaust museum was opened at Flossenbürg. The ceremony was attended by 84 former inmates, in addition to the president of Ukraine, Viktor Yushchenko, whose father was among the camp's inmates during World War II for five months.[1]