Fluid mechanics is the branch of physics that studies the mechanics of fluids (liquids, gases, and plasmas) and the forces on them. Fluid mechanics can be divided into fluid statics, the study of fluids at rest; and fluid dynamics, the study of the effect of forces on fluid motion. It is a branch of continuum mechanics, a subject which models matter without using the information that it is made out of atoms; that is, it models matter from a macroscopic viewpoint rather than from microscopic. Fluid mechanics, especially fluid dynamics, is an active field of research with many problems that are partly or wholly unsolved. Fluid mechanics can be mathematically complex, and can best be solved by numerical methods, typically using computers. A modern discipline, called computational fluid dynamics (CFD), is devoted to this approach to solving fluid mechanics problems. Particle image velocimetry, an experimental method for visualizing and analyzing fluid flow, also takes advantage of the highly visual nature of fluid flow.

The study of fluid mechanics goes back at least to the days of ancient Greece, when Archimedes investigated fluid statics and buoyancy and formulated his famous law known now as the Archimedes' principle, which was published in his work On Floating Bodies – generally considered to be the first major work on fluid mechanics. Rapid advancement in fluid mechanics began with Leonardo da Vinci (observations and experiments), Evangelista Torricelli (invented the barometer), Isaac Newton (investigated viscosity) and Blaise Pascal (researched hydrostatics, formulated Pascal's law), and was continued by Daniel Bernoulli with the introduction of mathematical fluid dynamics in Hydrodynamica (1738).

Fluid statics or hydrostatics is the branch of fluid mechanics that studies fluids at rest. It embraces the study of the conditions under which fluids are at rest in stable equilibrium; and is contrasted with fluid dynamics, the study of fluids in motion.

Hydrostatics is fundamental to hydraulics, the engineering of equipment for storing, transporting and using fluids. It is also relevant to geophysics and astrophysics (for example, in understanding plate tectonics and the anomalies of the Earth's gravitational field), to meteorology, to medicine (in the context of blood pressure), and many other fields.

Hydrostatics offers physical explanations for many phenomena of everyday life, such as why atmospheric pressure changes with altitude, why wood and oil float on water, and why the surface of water is always flat and horizontal whatever the shape of its container.

Fluid dynamics is a subdiscipline of fluid mechanics that deals with fluid flow—the natural science of fluids (liquids and gases) in motion. It has several subdisciplines itself, including aerodynamics (the study of air and other gases in motion) and hydrodynamics (the study of liquids in motion). Fluid dynamics has a wide range of applications, including calculating forces and moments on aircraft, determining the mass flow rate of petroleum through pipelines, predicting weather patterns, understanding nebulae in interstellar space and modelling fission weapon detonation. Some of its principles are even used in traffic engineering, where traffic is treated as a continuous fluid, and crowd dynamics.

Fluid dynamics offers a systematic structure—which underlies these practical disciplines—that embraces empirical and semi-empirical laws derived from flow measurement and used to solve practical problems. The solution to a fluid dynamics problem typically involves calculating various properties of the fluid, such as velocity, pressure, density, and temperature, as functions of space and time.

Fluid mechanics is a subdiscipline of continuum mechanics, as illustrated in the following table. 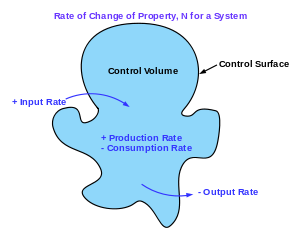 Balance for some integrated fluid quantity in a control volume enclosed by a control surface.

For example, consider a fluid in three dimensions. The assumption that mass is conserved means that for any fixed control volume (for example a sphere) – enclosed by a control surface – the rate of change of the mass contained is equal to the rate at which mass is passing from outside to inside through the surface, minus the rate at which mass is passing the other way, from inside to outside. (A special case would be when the mass inside and the mass outside remain constant). This can be turned into an equation in integral form over the control volume.[1]

Fluid mechanics assumes that every fluid obeys the following:

Further, it is useful at low subsonic speeds to assume that a gas is incompressible — that is, the density of the gas does not change even though the speed and static pressure change.

Fluids are composed of molecules that collide with one another and solid objects. The continuum assumption, however, considers fluids to be continuous. That is, properties such as density, pressure, temperature, and velocity are taken to be well-defined at "infinitely" small points, defining a REV (Reference Element of Volume), at the geometric order of the distance between two adjacent molecules of fluid. Properties are assumed to vary continuously from one point to another, and are averaged values in the REV. The fact that the fluid is made up of discrete molecules is ignored.

The Navier–Stokes equations (named after Claude-Louis Navier and George Gabriel Stokes) are the set of equations that describe the motion of fluid substances such as liquids and gases. These equations state that changes in momentum (force) of fluid particles depend only on the external pressure and internal viscous forces (similar to friction) acting on the fluid. Thus, the Navier–Stokes equations describe the balance of forces acting at any given region of the fluid.

This means that solutions of the Navier–Stokes equations for a given physical problem must be sought with the help of calculus. In practical terms only the simplest cases can be solved exactly in this way. These cases generally involve non-turbulent, steady flow (flow does not change with time) in which the Reynolds number is small.

For more complex situations, involving turbulence, such as global weather systems, aerodynamics, hydrodynamics and many more, solutions of the Navier–Stokes equations can currently only be found with the help of computers. This branch of science is called computational fluid dynamics.

General form of the equation

The general form of the Cauchy momentum equation is:

Unless the fluid is made up of spinning degrees of freedom like vortices,

is a symmetric tensor. In Navier Stokes equations the stress tensor can be decomposed as

is a static isotropic stress state (that would exist if the fluid were at rest), and

is the deviatoric stress tensor, corresponding to the part of the stress due to the fluid motion. Generally, the scalar

can be taken as the thermodynamic pressure, whereas

is called the viscous stress tensor. Furthermore, the diagonal components of tensor

are called normal stresses and the off-diagonal components are called shear stresses.

The vectorial Cauchy equation above can be written then as

This is actually a set of three equations, one per dimension. By themselves, these equations are not sufficient to produce a solution. However, adding other conservation laws and appropriate boundary conditions to the system of equations produces a solvable set of equations. The conservation of mass provides another equation relating the density and the flow velocity:

On the other hand, the identification of

with the thermodynamic pressure is usually possible (unless the fluid is not in thermodynamic equilibrium; such situation is however rare [e.g. shock waves]). Therefore, a thermodynamic equation of state must be used to connect the pressure with the density and another state property, such as temperature or enthalpy. This in turn brings another unknown to the problem so that an equation for conservation of thermal energy must also be solved along with momentum and mass conservations.

In the case of an incompressible fluid there is no relationship between the pressure and the density. The Navier–Stokes equations and mass conservation are then sufficient to determine the solution to a fluid mechanics problem. Actually, the absolute pressure in an incompressible fluid is indeterminate, and only its gradient is relevant for the equations of motion. Taking the divergence of the Navier–Stokes equation and using the mass conservation equation to simplify the result gives a Poisson equation for the pressure.

Additionally, in order to close the system of equations a constitutive equation relating the viscous stress tensor to the velocity field must be introduced. This constitutive model, which depends on the nature of the fluid, is the basis for the distinction between Newtonian and non-Newtonian fluids.

A Newtonian fluid (named after Isaac Newton) is defined to be a fluid whose shear stress is linearly proportional to the velocity gradient in the direction perpendicular to the plane of shear. This definition means regardless of the forces acting on a fluid, it continues to flow. For example, water is a Newtonian fluid, because it continues to display fluid properties no matter how much it is stirred or mixed. A slightly less rigorous definition is that the drag of a small object being moved slowly through the fluid is proportional to the force applied to the object. (Compare friction). Important fluids, like water as well as most gases, behave – to good approximation – as a Newtonian fluid under normal conditions on Earth.[2]

Equations for a Newtonian fluid

The constant of proportionality between the viscous stress tensor and the velocity gradient is known as the viscosity. A simple equation to describe incompressible Newtonian fluid behaviour is

is the shear stress exerted by the fluid ("drag")

is the fluid viscosity – a constant of proportionality

is the velocity gradient perpendicular to the direction of shear.

For a Newtonian fluid, the viscosity, by definition, depends only on temperature and pressure, not on the forces acting upon it. If the fluid is incompressible the equation governing the viscous stress (in Cartesian coordinates) is

is the shear stress on the

face of a fluid element in the

is the velocity in the

is the second viscosity coefficient (or bulk viscosity). If a fluid does not obey this relation, it is termed a non-Newtonian fluid, of which there are several types. Non-Newtonian fluids can be either plastic, Bingham plastic, pseudoplastic, dilatant, thixotropic, rheopectic, viscoelastic.

In some applications another rough broad division among fluids is made: ideal and non-ideal fluids. An Ideal fluid is non-viscous and offers no resistance whatsoever to a shearing force. An ideal fluid really does not exist, but in some calculations, the assumption is justifiable. One example of this is the flow far from solid surfaces. In many cases the viscous effects are concentrated near the solid boundaries (such as in boundary layers) while in regions of the flow field far away from the boundaries the viscous effects can be neglected and the fluid there is treated as it were inviscid (ideal flow). When the viscosity is negleted, the term containing the viscous stress tensor

in the Navier–Stokes equation vanishes. The equation reduced in this form is called the Euler equation.