From Infogalactic: the planetary knowledge core
Jump to: navigation, search
This article is about the fluoride ion. For a review of fluorine compounds, see Compounds of fluorine. For the fluoride additive used in toothpaste, see Sodium fluoride.
"Floride" redirects here. For the 2015 French film, see Floride (film).

Fluoride /ˈflʊəraɪd/,[3] /ˈflɔːraɪd/[3] is an inorganic, monatomic anion of fluorine with the chemical formula F−
. Fluoride is the simplest anion of fluorine. Its salts and minerals are important chemical reagents and industrial chemicals, mainly used in the production of hydrogen fluoride for fluorocarbons. In terms of charge and size, the fluoride ion resembles the hydroxide ion. Fluoride ions occur on earth in several minerals, particularly fluorite, but are only present in trace quantities in water. Fluoride contributes a distinctive bitter taste. It contributes no color to fluoride salts.

The systematic name fluoride, the valid IUPAC name, is determined according to the additive nomenclature. However, the name fluoride is also used in compositional IUPAC nomenclature which does not take the nature of bonding involved into account. Examples of such naming are sulfur hexafluoride and beryllium fluoride, which contain no fluoride ions whatsoever, although they do contain fluorine atoms.

Fluoride is also used non-systematically, to describe compounds which releases hydrogen fluoride upon acidification, or a compound that otherwise incorporates fluorine in some form, such as methyl fluoride and fluorosilicic acid. Hydrogen fluoride is itself an example of a non-systematic name of this nature. However, it is also a trivial name, and the preferred IUPAC name for fluorane. 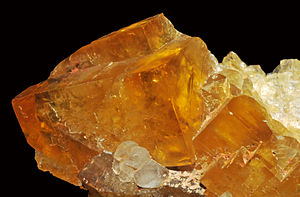 Many fluoride minerals are known, but of paramount commercial importance is fluorite (CaF2), which is roughly 49% fluoride by mass.[4] The soft, colorful mineral is found worldwide.

Seawater fluoride levels are usually in the range of 0.86 to 1.4 mg/L, and average 1.1 mg/L.[5] For comparison, chloride concentration in seawater is about 19 g/L. The low concentration of fluoride reflects the insolubility of the alkaline earth fluorides, e.g., CaF2.

All tea leaves contain fluoride; however, mature leaves contain as much as 10 to 20 times the fluoride levels of young leaves from the same plant.[8][9][10]

Fluoride can act as a base. It can combine with a proton (H+
):

In aqueous solution, fluoride has a pKb value of 10.8. It is therefore a weak base, and tends to remain as the fluoride ion rather than generating a substantial amount of hydrogen fluoride. That is, the following equilibrium favours the left-hand side in water:

However, upon prolonged contact with moisture, soluble fluoride salts will decompose to their respective hydroxides or oxides, as the hydrogen fluoride escapes. Fluoride is distinct in this regard among the halides. The identity of the solvent can have a dramatic effect on the equilibrium shifting it to the right-hand side, greatly increasing the rate of decomposition.

Counter-intuitively, unlike the lower halides, the variety of possible salts containing true fluoride ions is rather restricted. Most metal fluorides are highly polar, covalently bonded molecular networks instead of ionic lattices. All of the alkali metal fluorides, and most of the alkaline earth metal fluorides are true salts. In such true salts, fluoride typically assumes the primitive or face-centred cubic motifs. Fluoride is also found with weakly coordinating counter cations, such as in ammonium fluoride, in which it assumes the close-packed hexagonal motif. Under aqueous conditions, fluoride exists as a trigonal pyramidal-shaped hydrated complex, namely [F(H2O)3]−. Fluoride has the smallest monatomic, crystal and effective, ionic radii: 199 and 133 pm, respectively.

Upon treatment with a standard acid, fluoride salts convert to hydrogen fluoride and metal salts. With strong acids, it can be doubly protonated to give H
2F+
. Oxidation of fluoride gives fluorine. Solutions of inorganic fluorides in water contain F− and bifluoride HF−
2.[11] Few inorganic fluorides are soluble in water without undergoing significant hydrolysis. In terms of its reactivity, fluoride differs significantly from chloride and other halides, and is more strongly solvated in protic solvents due to its smaller radius/charge ratio. Its closest chemical relative is hydroxide.[citation needed] When relatively unsolvated, for example in nonprotic solvents, fluoride anions are called "naked". Naked fluoride is a very strong Lewis base,[12] it is easily reacted with Lewis acids, forming strong adducts. Fluoride is susceptible to extreme ultraviolet radiation, ejecting an electron to become highly reactive atomic fluorine. It has a standard electrode potential of 2.87 Volts.

At physiological pHs, hydrogen fluoride is usually fully ionised to fluoride. In biochemistry, fluoride and hydrogen fluoride are equivalent. Fluorine, in the form of fluoride, is considered to be a micronutrient for human health, necessary to prevent dental cavities, and to promote healthy bone growth.[6] The tea plant (Camellia sinensis L.) is a known accumulator of fluorine compounds, released upon forming infusions such as the common beverage. The fluorine compounds decompose into products including fluoride ions. Fluoride is the most bioavailable form of fluorine, and as such, tea is potentially a vehicle for fluoride dosing.[13] Approximately, fifty percent of absorbed fluoride is excreted renally with a twenty four hour period. The remainder can be retained in the oral cavity, and lower digestive tract. Fasting dramatically increases the rate of fluoride absorption to near hundred percent, from a sixty to eighty percent when taken with food.[13] Per a 2013 study, it was found that consumption of one litre of tea a day, can potentially supply the daily recommended intake of 4 mg per day. Some lower quality brands can supply up to a 120 percent of this amount. Fasting can increase this to 150 percent. The study indicates that tea drinking communities are at an increased risk of dental and skeletal fluorosis, in the case where water fluoridation is in effect.[13] Fluoride ion in low doses in the mouth reduces tooth decay. For this reason, it is used in toothpaste and water fluoridation. At much higher doses, fluoride causes health complications and can be toxic.

Fluoride salts and hydrofluoric acid are the main fluorides of industrial value. Compounds with C-F bonds fall into the realm of organofluorine chemistry. The main uses of fluoride, in terms of volume, are in the production of cryolite, Na3AlF6. It is used in aluminium smelting. Formerly, it was mined, but now it is derived from hydrogen fluoride. Fluorite is used on a large scale to separate slag in steel-making. Mined fluorite (CaF2) is a commodity chemical used in steel-making.

Hydrofluoric acid and its anhydrous form, hydrogen fluoride, is also used in the production of fluorocarbons. Hydrofluoric acid has a variety of specialized applications, including its ability to dissolve glass.[4] 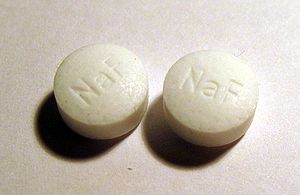 Fluoride is sold in tablets for cavity prevention.

Fluoride-containing compounds, such as sodium fluoride or sodium monofluorophosphate are used in topical and systemic fluoride therapy for preventing tooth decay. They are used for water fluoridation and in many products associated with oral hygiene.[14] Originally, sodium fluoride was used to fluoridate water; hexafluorosilicic acid (H2SiF6) and its salt sodium hexafluorosilicate (Na2SiF6) are more commonly used additives, especially in the United States. The fluoridation of water is known to prevent tooth decay[15][16] and is considered by the U.S. Centers for Disease Control and Prevention as "one of 10 great public health achievements of the 20th century".[17][18] In some countries where large, centralized water systems are uncommon, fluoride is delivered to the populace by fluoridating table salt. For the method of action for cavity prevention, see Fluoride therapy. Fluoridation of water has its critics (see Water fluoridation controversy).[19]

Fluoride salts are commonly used in biological assay processing to inhibit the activity of phosphatases, such as serine/threonine phosphatases.[20] Fluoride mimics the nucleophilic hydroxide ion in these enzymes' active sites.[21] Beryllium fluoride and aluminium fluoride are also used as phosphatase inhibitors, since these compounds are structural mimics of the phosphate group and can act as analogues of the transition state of the reaction.[22][23]

Daily intakes of fluoride can vary significantly according to the various sources of exposure. Values ranging from 0.46 to 3.6–5.4 mg/day have been reported in several studies (IPCS, 1984).[24] In areas where water is fluoridated this can be expected to be a significant source of fluoride, however fluoride is also naturally present in huge range of foods, in a wide range of concentrations.[25] The maximum safe daily consumption of fluoride is 10 mg for an adult.

According to the U.S. Department of Agriculture, the Dietary Reference Intakes, which is the "highest level of daily nutrient intake that is likely to pose no risk of adverse health effects" specify 10 mg/day for most people, corresponding to 10 L of fluoridated water with no risk. For infants and young children the values are smaller, ranging from 0.7 mg/d for infants to 2.2 mg/d.[26] Water and food sources of fluoride include community water fluoridation, seafood, tea, and gelatin.[27]

The EPA lists fluoride as a chemical with substantial evidence of developmental neurotoxicity.[28]

Soluble fluoride salts, of which sodium fluoride is the most common, are only mildly toxic, although they have resulted in both accidental and suicidal deaths from acute poisoning.[4] The lethal dose for most adult humans is estimated at 5 to 10 g (which is equivalent to 32 to 64 mg/kg elemental fluoride/kg body weight).[29][30][31] However, a case of a fatal poisoning of an adult with 4 grams of sodium fluoride is documented,[32] while a dose of 120 g sodium fluoride has been survived.[33] For Sodium fluorosilicate (Na2SiF6), the median lethal dose (LD50) orally in rats is 0.125 g/kg, corresponding to 12.5 g for a 100 kg adult.[34]

The fatal period ranges from 5 min to 12 hours.[32] The mechanism of toxicity involves the combination of the fluoride anion with the calcium ions in the blood to form insoluble calcium fluoride, resulting in hypocalcemia; calcium is indispensable for the function of the nervous system, and the condition can be fatal.

Treatment may involve oral administration of dilute calcium hydroxide or calcium chloride to prevent further absorption, and injection of calcium gluconate to increase the calcium levels in the blood.[32] Hydrogen fluoride is more dangerous than salts such as NaF because it is corrosive and volatile, and can result in fatal exposure through inhalation or upon contact with the skin; calcium gluconate gel is the usual antidote.[35]

In the higher doses used to treat osteoporosis, sodium fluoride can cause pain in the legs and incomplete stress fractures when the doses are too high; it also irritates the stomach, sometimes so severely as to cause ulcers. Slow-release and enteric-coated versions of sodium fluoride do not have gastric side effects in any significant way, and have milder and less frequent complications in the bones.[36] In the lower doses used for water fluoridation, the only clear adverse effect is dental fluorosis, which can alter the appearance of children's teeth during tooth development; this is mostly mild and is unlikely to represent any real effect on aesthetic appearance or on public health.[37] Fluoride was known to enhance the measurement of bone mineral density at the lumbar spine, but it was not effective for vertebral fractures and provoked more non vertebral fractures.[38]

In areas that have naturally occurring high levels of fluoride in groundwater which is used for drinking water, both dental and skeletal fluorosis can be prevalent and severe.[39]

A popular urban myth claims that the Nazis used fluoride in concentration camps, but there is no historical evidence to prove this claim.[40]

Concentrated fluoride solutions are corrosive.[citation needed] Gloves made of nitrile rubber are worn when handling fluoride compounds. The hazards of solutions of fluoride salts depend on the concentration. In the presence of strong acids, fluoride salts release hydrogen fluoride, which is corrosive, especially toward glass.[4]

Organic and inorganic anions are produced from fluoride, including: