The Fokker D.VII was a German World War I fighter aircraft designed by Reinhold Platz of the Fokker-Flugzeugwerke. Germany produced around 3,300 D.VII aircraft in the second half of 1918. In service with the Luftstreitkräfte, the D.VII quickly proved itself to be a formidable aircraft. The Armistice ending the war specifically required Germany to surrender all D.VIIs to the Allies.[1] Surviving aircraft saw continued widespread service with many other countries in the years after World War I. 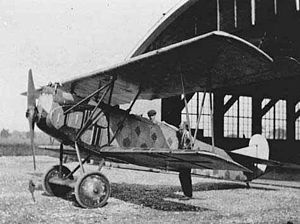 Fokker's chief designer, Reinhold Platz, had been working on a series of experimental planes, the V-series, since 1916. These aircraft were characterized by the use of cantilever wings. Junkers had originated the idea in 1915 with the first all-metal aircraft, the Junkers J 1, nicknamed Blechesel ("Sheet Metal Donkey" or "Tin Donkey"). The resulting wings were thick, with a rounded leading edge. This gave greater lift and more docile stalling behavior than the thin wings commonly used at the time.

Late in 1917, Fokker built the experimental V 11 biplane, fitted with the standard Mercedes D.IIIa engine. In January 1918, Idflieg held a fighter competition at Adlershof. For the first time, frontline pilots would directly participate in the evaluation and selection of new fighters. Fokker submitted the V 11 along with several other prototypes. Manfred von Richthofen flew the V 11 and found it tricky, unpleasant, and directionally unstable in a dive. In response to these complaints, Reinhold Platz lengthened the rear fuselage by one structural bay, and added a triangular vertical fin in front of the rudder. Upon flying the modified V 11, Richthofen praised it as the best aircraft of the competition. It offered excellent performance from the outdated Mercedes engine, yet was safe and easy to fly. Richthofen's recommendation virtually decided the competition, but he was not alone in recommending it. Fokker immediately received a provisional order for 400 production aircraft, which were designated D.VII by Idflieg.

Fokker's factory was not up to the task of meeting all D.VII production orders. Idflieg therefore directed Albatros and AEG to build the D.VII under license, though AEG did not ultimately produce any aircraft. Because the Fokker factory did not use detailed plans as part of its production process, Fokker simply sent a completed D.VII airframe for Albatros to copy. Albatros paid Fokker a five percent royalty for every D.VII built under license. Albatros Flugzeugwerke and its subsidiary, Ostdeutsche Albatros Werke (OAW), built the D.VII at factories in Johannisthal (designated Fokker D.VII (Alb)) and Schneidemühl (Fokker D.VII (OAW)), respectively. Aircraft markings included the type designation and factory suffix, immediately before the individual serial number.

Some parts were not interchangeable between aircraft produced at different factories, even between Albatros and OAW.[2] Additionally each manufacturer tended to differ in nose paint styles. OAW produced examples were delivered with distinctive mauve and green splotches on the cowling. All D.VIIs were produced with either the five-color Fünffarbiger five-color, or less often the four-color Vierfarbiger lozenge camouflage covering except for early Fokker-produced D.VIIs, which had a streaked green fuselage. Factory camouflage finishes were often overpainted with colorful paint schemes or insignia for the Jasta, or the individual pilot.

In September 1918, eight D.VIIs were delivered to Bulgaria. Late in 1918, the Austro-Hungarian company MÁG (Magyar Általános Gépgyár - Hungarian General Machine Company) commenced licensed production of the D.VII with Austro-Daimler engines. Production continued after the end of the war, with as many as 50 aircraft completed.[3]

By mid-1918, some D.VIIs received the "overcompressed" 138 kW (185 hp) BMW IIIa, the first product of the BMW firm. The BMW IIIa followed the SOHC, straight-six configuration of the Mercedes D.III, but incorporated several improvements. Increased displacement, higher compression, and an altitude-adjusting carburetor produced a marked increase in speed and climb rate at high altitude. Because the BMW IIIa was overcompressed, using full throttle at altitudes below 2,000 m (6,700 ft) risked premature detonation in the cylinders and damage to the engine. At low altitudes, full throttle could produce up to 179 kW (240 hp) for a short time. Fokker-built aircraft with the new BMW engine were designated D.VII(F), the suffix "F" standing for Max Friz, the engine's designer.

BMW-engined aircraft entered service with Jasta 11 in late June 1918. Pilots clamored for the D.VII(F), of which about 750 were built. Production of the BMW IIIa was very limited and the D.VII continued to be produced with the 134 kW (180 hp) Mercedes D.IIIaü until the end of the war.

D.VIIs flew with different propeller designs from different manufacturers. Despite the differing appearances there is no indication these propellers gave disparate performance. Axial, Wolff, Wotan, and Heine propellers have been noted.

The D.VII entered squadron service with Jasta 10 in early May 1918. When the Fokker D.VII appeared on the Western Front in April 1918, Allied pilots at first underestimated the new fighter because of its squarish, ungainly appearance, but quickly revised their view. The type quickly proved to have many important advantages over the Albatros and Pfalz scouts. Unlike the Albatros scouts, the D.VII could dive without any fear of structural failure. The D.VII was also noted for its high maneuverability and ability to climb at high angles of attack, its remarkably docile stall, and its reluctance to spin. It could literally "hang on its prop" without stalling for brief periods of time, spraying enemy aircraft from below with machine gun fire. These handling characteristics contrasted with contemporary scouts such as the Camel and SPAD, which stalled sharply and spun vigorously.

The D.VII also had problems. Several aircraft suffered rib failures and fabric shedding on the upper wing. Heat from the engine sometimes ignited phosphorus ammunition until cooling vents were installed in the engine cowling, and fuel tanks sometimes broke at the seams. Aircraft built by the Fokker factory at Schwerin were noted for their lower standard of workmanship and materials. Nevertheless, the D.VII proved to be a remarkably successful design, leading to the familiar aphorism that it could turn a mediocre pilot into a good one, and a good pilot into an ace.

Manfred von Richthofen died days before the D.VII began to reach the Jagdstaffeln and never flew it in combat. Other pilots, including Erich Löwenhardt and Hermann Göring, quickly racked up victories and generally lauded the design. Aircraft availability was limited at first, but by July there were 407 on charge. Larger numbers became available by August, when D.VIIs achieved 565 victories. The D.VII eventually equipped 46 Jagdstaffeln. When the war ended in November, 775 D.VII aircraft were in service.

Other countries used the D.VII operationally. The Polish deployed approximately 50 aircraft during the Polish-Soviet War, using them mainly for ground attack missions.[5] The Hungarian Soviet Republic used a number of D.VIIs, both built by MAG and ex-German aircraft in the Hungarian-Romanian War of 1919.[6]

The Dutch, Swiss, and Belgian air forces also operated the D.VII. The aircraft proved so popular that Fokker completed and sold a large number of D.VII airframes that he had smuggled into the Netherlands after the Armistice. As late as 1929, the Alfred Comte company manufactured eight new D.VII airframes under license for the Swiss Fliegertruppe.

Many modern D.VII reproductions have been built. Most flyable examples are powered by Ranger or Gipsy Queen inverted inline engines. These engines must be turned upright to produce the correct thrust line, thus requiring a new oiling system. A few flying reproductions, such as the one at New York State's Old Rhinebeck Aerodrome, are equipped with original Mercedes D.IIIa engines.[7]