From Infogalactic: the planetary knowledge core
Jump to: navigation, search
For other uses, see Folklore (disambiguation).

Folklore can be described as traditional art, literature, knowledge, and practices that are passed on in large part through oral communication and example.[1] The information thus transmitted expresses the shared ideas and values of a particular group. British antiquarian William Thoms is generally credited with coining the term "folklore" in 1846.[2] As an academic discipline folklore shares methods, and insights with literature, anthropology, art, music, history, linguistics, philosophy, and mythology. Elliott Oring states that folklore is that part of culture that "lives happily ever after".[3] Folkloristics is the academic study of folklore.

Folk or traditional culture is that culture that is maintained and transmitted by word of mouth or by customary practice rather than by written or printed documents.[4] In this it is distinguishable from so-called "high culture" and "pop culture".

Folklore expresses the ideas and values of a particular group. It is characteristically passed on orally or by example. It is anonymous, traditional, and follows prescribed formulae.

In oral tradition, information is passed on verbally from one generation to another. This may be transmitted in speech or song and may take the form of folktales, songs, or chants. Because it is conveyed orally, it may change in the retelling and appear in a variety of versions. This is particularly noted in folktales and folksongs. Some American folksongs can be traced back to England or Ireland, brought by immigrants who adapted the lyrics in light of their new surroundings and experiences.[5]

Carl Wilhelm von Sydow noted that folklore varies from region to region and suggested that this indicates the communities' adaptation to their own cultural environment.[6] The Scottish ballad "Marie Hamilton" is found in over fifty versions, recorded at different times and places form different sources. While the different versions have a great deal in common, there is considerable variation.[4]

“All folklore participates in a distinctive, dynamic process. Constant change, variation within a tradition, whether intentional or inadvertent, is viewed here simply as a central fact of existence for folklore, and ...a defining feature that grows out of context, performance, attitude, cultural tastes, and the like.”[7] Traditions which survive are those which have proved useful and suitable, even in a new environment.[8]

In the past, folklore was generally focused on traditional stories and songs. Academics such as Jacob and Wilhelm Grimm, Francis James Child, and George Lyman Kittredge collected and categorized many traditional stories and songs, both to preserve the texts and to learn about the past. A more contemporary view holds folklore to encompass a variety of creative expression.

Genres of folklore include Material culture such as folk art, Music such as folk songs, Narratives such as legends, Sayings such as proverbs, Beliefs as in folk religion, and Food as in traditional cooking.[9]

Within these there are a number of subgenres. There is a good deal of overlap in classifying an example of folklore into genres.[5] A ballad is a narrative that may be a poem or sung to a traditional melody. Historical examples date back to the Middle Ages. Particular jokes are often part of the lore of a specific occupation.[5] 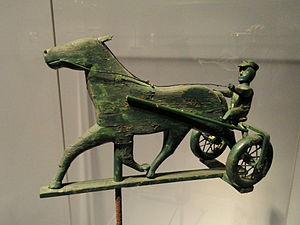 Folklore studies of material culture typically address how objects are designed, made, and used, and what they mean to those who make and use them. Material culture includes pottery, woodworking, wood and stone sculpting and general crafts, as well as decorative ironwork such as weathervanes. A craftsperson may use methods, techniques, materials, and even designs dating back many generations in their own particular interpretations. Over time the functional purpose of an object may shift and what was once crafted primarily for utilitarian purposes is now viewed as an expensive piece of artwork.[10] The Blue Ridge Parkway Folklife Project Collection includes documentation of the quilting tradition carried on in rural communities along the Virginia-North Carolina border.[11]

Houses, barns, and other traditional buildings constitute a subcategory of material culture known as vernacular architecture.

Folk songs include: rounds, drinking songs, work songs, and sea chanteys. However, probably the best studied is the traditional ballad. Svend Grundtvig published a Danish translation of English and Scottish ballads in 1842, followed in 1853 by his first volume of Danish ballads.[12] Folklore can also be the root of many cultural types of music. Country, blues, and bluegrass all originate from American folksongs, which in turn, derive, in many instances, from folksongs from Europe. 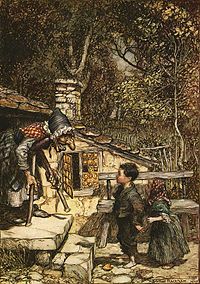 Among the most common types of narrative folklore are folktales (folk tales). A folktale is a story that forms part of an oral tradition, and does not have a single, identifiable author. The stories are passed down from one generation to the next, and over time become expanded and reshaped with each retelling. Folktales often reflect the values and customs of the culture from which they come. They have been used to teach character traits. The Buddhist story of "The Banyan Deer" illustrates concern for others.[13] The Ghanaian folktale "The Hungry Little Boy" teaches respect for the elderly.

Folktales are often not connected to a specific time, place, or historical persons. The characters are usually ordinary people. Similar folktales are found in different cultures around the world. Vladimir Propp found a uniform structure in Russian fairy tales.[14] A folk narrative can have both a moral and psychological aspect, as well as entertainment value, depending upon the nature of the teller, the style of the telling, the ages of the audience members, and the overall context of the performance. A skilled storyteller will adapt the narrative to his particular audience.

The Bremen Town Musicians is a folktale recorded by the Brothers Grimm. Another version is Irish tale, Jack and His Comrades.

A fable is a subgenre of folktales that uses anthropomorphic animals to illustrate a moral.

Fairy tales involving magical, fantastic or wonderful episodes, characters, events, or symbols. They are often populated by fairies, elves, trolls, dwarfs, giants, and other imaginary creatures. Fairy tales take place in timeless settings, as indicated by the beginning "Once upon a time". The main character is a person who triumphs over difficulties partly through the use of magic. Originally spoken stories, fairy tales became a distinct literary genre in late-seventeenth-century France.[15] Cinderella is a well-known fairy tale.

A Tall tale is a story about a real or fictitious person whose exploits are wildly exaggerated. These are often folklore related to specific occupations, such as the cowboy Pecos Bill, lumberjack Paul Bunyan and the famous "steel-driving man" John Henry (folklore).

Legends are set in the past and tell of heroes and kings and deeds of valor. They are may be based on real people or actual events. They may also contain lists of succession in ruling houses. In this they function as a sort of verbal historical record. They may also incorporate local tales of ghosts, and buried treasure.[16] Stories about Robin Hood are legends.

File:Prince Salim (the future Jahangir) and his legendary illicit love.jpg
The story of Jahangir and Anarkali is popular folklore in the former territories of the Mughal Empire.

Folk art is "...art made with an awareness of and a connection to tradition and community."[10] Kenneth Ames differentiates between crafts and folk art in that crafts speak to the needs of everyday living, while folk art speaks to the need for aesthetic expression.[11] Storytelling is one of earliest forms of folk art. Hex signs on Pennsylvania Dutch barns are also an example of traditional expression.[11]

Many folk sayings relate to the weather, such as, "“If Candlemas Day be fair and bright, Winter will have another flight."[17] This is reflected in the popular that on Groundhog Day, (which also falls on February 2), if the groundhog sees its shadow there will be six more weeks of winter.[18]

On the Isle of Jersey bean crock is a traditional dish, and many Jersey homes will have an earthenware pot (or crock). Beans used to be dried ready for winter, and the meal would be left to cook in the crock for the whole day in the oven.[19]

A popular custom in many parts of Europe is the midsummer celebration of St John's Eve when bonfires were lit at sunset and tended until long after midnight. In some places prayers used to be said for a blessing on the crops, then at the peak-point of summer bloom.[20]

Customs can be used to reinforce cultural identity. Maximilian II of Bavaria studied the art and customs of the people to promote a Bavarian national identity during German unification efforts dominated by Prussia. He was the first to formalize what was considered correct folklore dress. The introduction of a national costume was seen as something which would increase a feeling of national cohesion amongst Bavarians.

Childlore is a distinct branch of folklore, and concerns those activities which are learned and passed on by children to other children. This includes traditional games, street games such as stickball, playground songs, riddles, and rhymes. Noted researchers in this field were Iona and Peter Opie. Children's counting-out games can be defined as behavioral folklore.[21]

Folklore can be classified by ethnicity, region, religion, occupation, and many other categories. Folklore can be a reflection and expression of a group's concerns.[8] Ethnic folklore is a significant indicator of a groups's traditional values.[22]

The "Archie Green Fellows Program" of the Library of Congress honors the legacy of folklorist Archie Green through the Folklife Center’s support of the collecting of occupational folklore. Folklore particular to an occupation will include storytelling, jokes, proverbs, shared beliefs, tools and specialized clothing, and shared knowledge of occupational skills and processes.[23]