This article deals with the diplomatic affairs, foreign policy and international relations of Barbados.

Barbados is a moderate political and economic power in the Caribbean region.

Between independence in 1966 and the 1990s, Barbados has used a pro business and investment policy to expand its influence in the world. Through the usage of its network of international bilateral relations, the country has been able to maintain an independent foreign policy. Barbados' recent policy has been to focus and strengthen ties with nations that country feels will enhance its diplomacy or foreign trade. Barbados has sought to engage in multilateral diplomacy through the United Nations, the Caribbean Community (CARICOM), the Association of Caribbean States (ACS), the group of ACP countries, the Organization of American States, and several other agencies which it is engaged. In 2008 Barbados and the other members of CARICOM signed an Economic Partnership Agreement (EPA) with the European Union and its European Commission.[1] The deal covers CARICOM's membership in the Caribbean Forum (CARIFORUM). CARIFORUM in turn is a part of the Group of African, Caribbean, and Pacific (ACP) States. The agreement outlines Barbados' future development and trade ties with the European Union, and serves as a blueprint for future relations between both trading blocs under the Cotonou Agreement and the Lomé Convention.[2]

At times Barbados has found itself as a countervailing force to U.S. political and economic influence in the English-speaking Caribbean.

As a small nation, the primary thrust of Barbados' diplomatic activity has been within international organisations. Currently Barbados has established official diplomatic relations with 105 countries around the globe. 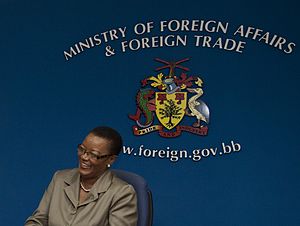 Maxine McClean is the Minister of Foreign Affairs of Barbados

In 1965, Barbados, Antigua and Barbuda, Guyana, and Trinidad and Tobago established the Caribbean Free Trade Association (CARIFTA). Following independence from the United Kingdom in 1966, Barbados went on to become a founding member of many other international organizations.

On July 4, 1973, the founding nations of Barbados, Trinidad and Tobago, Guyana, and Jamaica signed the original Treaty of Chaguaramas in Trinidad thus establishing the Caribbean Community and Common Market (CARICOM). The agreement to establish CARICOM wound up succeeded the CARIFTA organisation. By the following year many of the remaining English-speaking Caribbean states followed suit and also joined CARICOM by May 1974, bring it slowly to the 15 members it has today.

Barbados also is a member of the Caribbean Development Bank (CDB), established in 1970, with headquarters in Bridgetown. The eastern Caribbean's Regional Security System (RSS), which associates Barbados with six other island nations, also based in Barbados. In July 1994, Barbados joined the newly established Association of Caribbean States (ACS).

In 2002 the United Nations opened a building in the Marine Gardens area of Hastings found in the Parish of Christ Church the facility simply called the United Nations House acts as a regional operations headquarters for several programmes of the United Nations in Barbados and for many of the other islands in the Eastern Caribbean region.[3]

Barbados has a network or of relations with 103 countries around the world, though principal relations are with the following countries.[4]

Barbados has a number of Bilateral Investment Treaties (BITs) with a growing list of nations. Some of which include:[26]

Barbados has a number of Double Taxation Agreements (DTAs) with a growing list of nations. Some of which include:[28]

The late Prime Minister Errol Walton Barrow gave a speech during the first General Assembly attended by Barbados: Telling the assembly that his country will be an exponent, "not of the diplomacy of power, but of the diplomacy of peace and prosperity. We have no quarrels to pursue and we particularly insist that we do not regard any member state as our natural opponent," he said. "We will be friends of all, satellites of none."

Barbados is also a member of the International Criminal Court, without a Bilateral Immunity Agreement of protection for the US-military (as covered under Article 98)