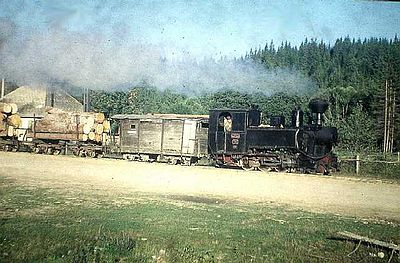 A forest railway, forest tram, timber line, logging railway or logging railroad is a mode of railway transport which is used for forestry tasks, primarily the transportation of felled logs to sawmills or railway stations.

In most cases this form of transport utilised narrow gauges, and were temporary in nature, and in rough and sometimes difficult to access terrain.

Before the railway was invented, logs were transported in large numbers from the forest down rivers either freely or on wooden rafts. This was not without its problems and wood was often damaged in transit, lost in floods or stranded in shallow water. Suitable rivers were often unavailable in mountainous terrain.

Simple wagonways, using horses and wooden rails, were used from the 18th century. However the invention of the steam locomotive and steel rails soon led to these being employed for forestry. However the difficult terrain within forests meant that narrow gauge railways, which took up less space, were lighter and easier to build and enabled tight curves to be laid, were preferred. These were the so-called forest railways. In particularly large areas of forest or forests of unusually large trees, such as in the northwestern USA, extensive forest railways were even built using standard gauge exclusively for forestry tasks. In cases where the railway itself was considered very short-term, or the region was extremely difficult to access, logs would often be laid into the ground and carved to support a locomotive wheel as a makeshift track, rather than the cost and logistics of laying steel rails and sleepers. Special geared locomotives such as the Shay and Climax locomotive were developed for high tractive effort on rough track. Some forest railways became common carriers when cleared forest land was converted to agricultural or recreational use.

In addition to steam traction, diesel and petrol-driven locomotives were also used later on. These largely brought animal-hauled transportation to an end on the forest railways. Also common were routes that just used gravity. Wagons loaded with wood would simply roll downhill in a controlled fashion under the pull of gravity. Foresters also travelled on these, at some risk to their lives on occasions – as brakemen. Empty wagons were hauled uphill again by horses.

From the second half of the 20th century forest railways were threatened by road transportation and by the end of the 1960s they had practically disappeared from western Europe. Roads were often laid in their place on the old trackbeds.

In a few Eastern European countries forest railways survived longer, particularly in Russia where there are still some today. In Hungary too there are several forest railways in active service today, some are also used for tourist traffic. The numerous forest railway operations in Romania were closed, with a few exceptions, by the 1990s. In Western Europe there are very few which are even preserved as museum railways.

In Asia and Oceania (Australia and New Zealand) the history and fate of logging tramways/forest railways is similar to Europe, with most lines either converted to motorised truck transport or closing down in the 1960s. Significant numbers of locomotives and other remnants of the former lines are found in museums and museum railways in Australia.

(all lines on the Polish eastern border from north to south)

A logging railroad describes railroads, pole roads, tram roads, or similar infrastructure used to transport harvested timber from a logging site to a sawmill. Logging railroads vary in gauge and length, with most forested regions of the world supporting a railroad of this type at some point.

While most railroads of this variety were temporary, it was not uncommon for permanent railroads to take their place as a complement to logging operations or as an independent operation once logging ended.

Other railways for the transport of goods