From Infogalactic: the planetary knowledge core
Jump to: navigation, search
This article is about the scientific field of forestry. For the American racehorse, see Forestry (horse). 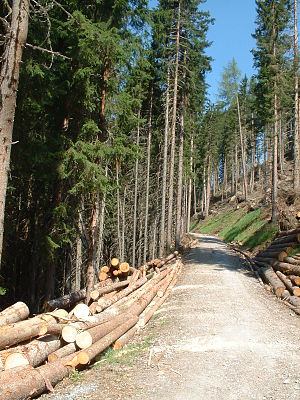 Forestry is the science and craft of creating, managing, using, conserving, and repairing forests and associated resources to meet desired goals, needs, and values for human benefit.[1] Forestry is practiced in plantations and natural stands. The forest science has elements that belong to the biological, physical, social, political and managerial sciences.[2]

Forest ecosystems have come to be seen as the most important component of the biosphere,[3] and forestry has emerged as a vital applied science, craft, and technology.

Forestry is an important economic segment in various industrial countries. For example, in Germany, forests cover nearly a third of the land area,[4] wood is the most important renewable resource, and forestry supports more than a million jobs and about billion in yearly turnover.[5] 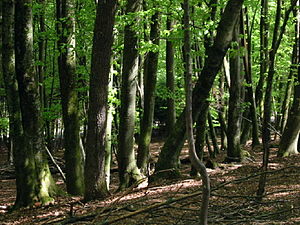 A deciduous beech forest in Slovenia

The preindustrial age has been dubbed by Werner Sombart and others as the 'wooden age', as timber and firewood were the basic resources for energy, construction and housing. The development of modern forestry is closely connected with the rise of capitalism, economy as a science and varying notions of land use and property.[6]

Roman Latifundiae, large agricultural estates were quite successful in maintaining the large supply of wood that was necessary for the Roman Empire.[7] Large deforestations came with respectively after the decline of the Romans.[7] However already in the 5th century, monks in the then Byzantine Romagna on the Adriatic coast, were able to establish stone pine plantations to provide fuelwood and food.[8] This was the beginning of the massive forest mentioned by Dante Alighieri in his 1308 poem Divine Comedy.[8]

Similar sustainable formal forestry practices were developed by the Visigoths in the 7th century when, faced with the ever increasing shortage of wood, they instituted a code concerned with the preservation of oak and pine forests.[8] The use and management of many forest resources has a long history in China as well, dating back to the Han Dynasty and taking place under the landowning gentry. A similar approach was used in Japan. It was also later written about by the Ming Dynasty Chinese scholar Xu Guangqi (1562–1633).

In Europe, land usage rights in medieval and early modern times allowed different users to access forests and pastures. Plant litter and resin extraction were important, as pitch (resin) was essential for the caulking of ships, falking and hunting rights, firewood and building, timber gathering in wood pastures, and for grazing animals in forests. The notion of "commons" (German "Allmende") refers to the underlying traditional legal term of common land. The idea of enclosed private property came about during modern times. However, most hunting rights were retained by members of the nobility which preserved the right of the nobility to access and use common land for recreation, like fox hunting. 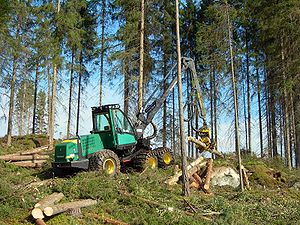 Timber harvesting is a common component of forestry 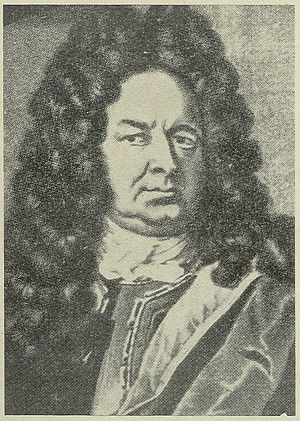 Systematic management of forests for a sustainable yield of timber is said to have begun in the German states in the 14th century, e.g. in Nuremberg,[9] and in 16th-century Japan.[10] Typically, a forest was divided into specific sections and mapped; the harvest of timber was planned with an eye to regeneration. As timber rafting allowed for connecting large continental forests, as in south western Germany, via Main, Neckar, Danube and Rhine with the coastal cities and states, early modern forestry and remote trading were closely connected. Large firs in the black forest were called „Holländer“, as they were traded to the Dutch ship yards. Large timber rafts on the Rhine were 200 to 400m in length, 40m in width and consisted of several thousand logs. The crew consisted of 400 to 500 men, including shelter, bakeries, ovens and livestock stables.[11] Timber rafting infrastructure allowed for large interconnected networks all over continental Europe and is still of importance in Finland.

Starting with the sixteenth century, enhanced world maritime trade, a boom in housing construction in Europe and the success and further Berggeschrey (rushes) of the mining industry increased timber consumption sharpely. The notion of 'Nachhaltigkeit', sustainability in forestry, is closely connected to the work of Hans Carl von Carlowitz (1645 - 1714), a mining administrator in Saxony. His book Sylvicultura oeconomica, oder haußwirthliche Nachricht und Naturmäßige Anweisung zur wilden Baum-Zucht (1713) was the first comprehensive treatise about sustainable yield forestry. In the UK, and to an extend in continental Europe, the enclosure movement and the clearances favored strictly enclosed private property.[12] The Agrarian reformers, early economic writers and scientists tried to get rid of the traditional commons.[13] At the time, an alleged tragedy of the commons together with fears of a Holznot, an imminent wood shortage played a watershed role in the controversies about cooperative land use patterns.[14]

The practice of establishing tree plantations in the British Isles was promoted by John Evelyn, though it had already acquired some popularity. Louis XIV's minister Jean-Baptiste Colbert's oak Forest of Tronçais, planted for the future use of the French Navy, matured as expected in the mid-19th century: "Colbert had thought of everything except the steamship," Fernand Braudel observed.[15] In parallel, schools of forestry were established beginning in the late 18th century in Hesse, Russia, Austria-Hungary, Sweden, France and elsewhere in Europe.

During the late 19th and early 20th centuries, forest preservation programs were established in British India, the United States, and Europe. Many foresters were either from continental Europe (like Sir Dietrich Brandis), or educated there (like Gifford Pinchot). Sir Dietrich Brandis is considered the father of tropical forestry, European concepts and practices had to be adapted in tropical and semi aride climate zones. The development of plantation forestry was one of the (controversial) answers to the specific challenges in the tropical colonies. The enactment and evolution of forest laws and binding regulations occurred in most Western nations in the 20th century in response to growing conservation concerns and the increasing technological capacity of logging companies. Tropical forestry is a separate branch of forestry which deals mainly with equatorial forests that yield woods such as teak and mahogany.

Forestry mechanization was always in close connection to metal working and the development of mechanical tools to cut and transport timber to its destination. Rafting belongs to the earliest means of transport. Steel saws came up in the 15th century. The 19th century widely increased the availability of steel for whipsaws and introduced Forest railways and railways in general for transport and as forestry customer. Further human induced changes, however, came since World War II, respectively in line with the '1950s-syndrome'.[16] The first portable chainsaw were invented in 1925 in Germany, but large impact of mechanization in forestry started after World War II. Forestry Harvesters are among the most recent developments.

Early journals which are still present 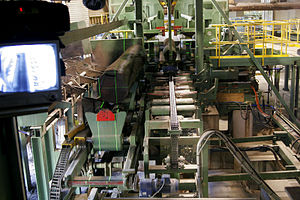 Today a strong body of research exists regarding the management of forest ecosystems and genetic improvement of tree species and varieties. Forestry also includes the development of better methods for the planting, protecting, thinning, controlled burning, felling, extracting, and processing of timber. One of the applications of modern forestry is reforestation, in which trees are planted and tended in a given area.

Trees provide numerous environmental, social and economic benefits for people.[25] In many regions the forest industry is of major ecological, economic, and social importance. Third-party certification systems that provide independent verification of sound forest stewardship and sustainable forestry have become commonplace in many areas since the 1990s. These certification systems were developed as a response to criticism of some forestry practices, particularly deforestation in less developed regions along with concerns over resource management in the developed world. Some certification systems are criticized for primarily acting as marketing tools and lacking in their claimed independence.

In topographically severe forested terrain, proper forestry is important for the prevention or minimization of serious soil erosion or even landslides. In areas with a high potential for landslides, forests can stabilize soils and prevent property damage or loss, human injury, or loss of life.

Public perception of forest management has become controversial, with growing public concern over perceived mismanagement of the forest and increasing demands that forest land be managed for uses other than pure timber production, for example, indigenous rights, recreation, watershed management, and preservation of wilderness, waterways and wildlife habitat. Sharp disagreements over the role of forest fires, logging, motorized recreation and other issues drives debate while the public demand for wood products continues to increase. 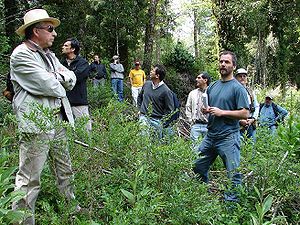 Foresters of UACh in the Valdivian forests of San Pablo de Tregua, Chile

Foresters develop and implement forest management plans relying on mapped resource inventories showing an area's topographical features as well as its distribution of trees (by species) and other plant cover. Plans also include landowner objectives, roads, culverts, proximity to human habitation, water features and hydrological conditions, and soils information. Forest management plans typically include recommended silvicultural treatments and a timetable for their implementation.

Forest management plans include recommendations to achieve the landowner's objectives and desired future condition for the property subject to ecological, financial, logistical (e.g. access to resources), and other constraints. On some properties, plans focus on producing quality wood products for processing or sale. Hence, tree species, quantity, and form, all central to the value of harvested products quality and quantity, tend to be important components of silvicultural plans.

Good management plans include consideration of future conditions of the stand after any recommended harvests treatments, including future treatments (particularly in intermediate stand treatments), and plans for natural or artificial regeneration after final harvests.

The objectives of landowners and leaseholders influence plans for harvest and subsequent site treatment. In Britain, plans featuring "good forestry practice" must always consider the needs of other stakeholders such as nearby communities or rural residents living within or adjacent to woodland areas. Foresters consider tree felling and environmental legislation when developing plans. Plans instruct the sustainable harvesting and replacement of trees. They indicate whether road building or other forest engineering operations are required.

Forestry as a science

Over the past centuries, forestry was regarded as a separate science. With the rise of ecology and environmental science, there has been a reordering in the applied sciences. In line with this view, forestry is one of three primary land-use sciences.[peacock term][dubious – discuss] The other two are agriculture and agroforestry.[27] Under these headings, the fundamentals behind the management of natural forests comes by way of natural ecology. Forests or tree plantations, those whose primary purpose is the extraction of forest products, are planned and managed utilizing a mix of ecological and agroecological principles.[28]

The first dedicated forestry school was established by Georg Ludwig Hartig at Hungen in the Wetterau, Hesse, in 1787, though forestry had been taught earlier in central Europe, including at the University of Giessen, in Hesse-Darmstadt.

The first in North America, the Biltmore Forest School was established near Asheville, North Carolina, by Carl A. Schenck on September 1, 1898, on the grounds of George W. Vanderbilt's Biltmore Estate. Another early school was the New York State College of Forestry, established at Cornell University just a few weeks later, in September 1898. Early 19th century North American foresters went to Germany to study forestry. Some early German foresters also emigrated to North America.

In South America the first forestry school was established in Brazil, in Viçosa, Minas Gerais, in 1962, and moved the next year to become a faculty at the Federal University of Paraná, in Curitiba.[29] 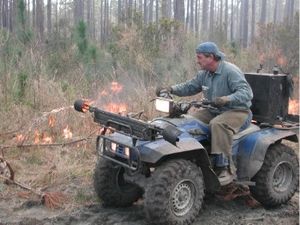 Prescribed burning is used by foresters to reduce fuel loads

In the United States, postsecondary forestry education leading to a Bachelor's degree or Master's degree is accredited by the Society of American Foresters.[30]

In Canada the Canadian Institute of Forestry awards silver rings to graduates from accredited university BSc programs, as well as college and technical programs.[31]

In many European countries, training in forestry is made in accordance with requirements of the Bologna Process and the European Higher Education Area.

The International Union of Forest Research Organizations is the only international organization that coordinates forest science efforts world-wide.[32]