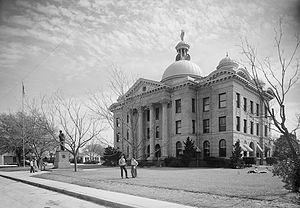 Fort Bend County is a county in the U.S. state of Texas. As of the 2010 census, its population was 585,375,[1] making it the tenth-most populous county in Texas. The county seat is Richmond,[2] while its largest city is Sugar Land. The county was founded in 1837 and organized the next year.[3] It is named for a blockhouse at a bend of the Brazos River; the fort was the start of the community in early days.

Fort Bend County is included in the Houston–The Woodlands–Sugar Land Metropolitan Statistical Area. Since the 1970s Fort Bend County has been one of the fastest-growing counties in the United States.[citation needed]

Prior to Anglo settlement, the area was inhabited by the Karankawa Indians. Mexican colonists had generally not reached this area, settling more in south Texas.

After Mexico achieved independence from Spain, Anglo-Americans starting entering from the east. In 1822, a group of Stephen F. Austin's colonists, headed by William Travis, built a fort at the present site of Richmond. The fort was called "Fort Bend" since it was built in the bend of the Brazos River.[4] The city of Richmond was incorporated under the Republic of Texas along with nineteen other towns in 1837. Fort Bend County was created from parts of Austin, Harris, and Brazoria counties in 1838.

Fort Bend developed a plantation economy based on cotton and, due to the high number of African-American slaves held as laborers, it was one of six majority-black counties in the state by the 1850s.[5] In 1860 the slave population totaled 4,127, more than twice that of the 2,016 whites.[6] There were very few free blacks, as Texas refused them entry.

While the area began to attract immigrants in the late 19th century, it continued as majority black during and after Reconstruction, when Republicans were elected to office. By the 1880s, most white residents belonged to the Democratic Party, but factional tensions were fierce, largely along racial lines. The Jaybirds, representing the majority of the whites, were struggling to regain control from the Woodpeckers, who were made up of some whites consistently elected to office by the majority of African-Americans; several had been former Republican officials during Reconstruction. Fort Bend County was the site of the Jaybird-Woodpecker War in 1888-1889. After a few murders were committed, the political feud culminated in a gun-battle at the courthouse on August 16, 1889 when several more people were killed and the Woodpeckers were routed from the seat of government.[7]

Governor Lawrence Sullivan Ross sent in militia forces and declared martial law. With his support, the Jaybirds ordered a list of certain blacks and Woodpecker officials out of the county. The Jaybirds took over county offices and established a "white-only pre-primary," disfranchising the African Americans from the only competitive contests in the county.[7] This device lasted until 1950 when Willie Melton and Arizona Fleming won a lawsuit against the practice in United States District Court though it was overturned on appeal. In 1953 they ultimately won their suit when the Jaybird primary was declared unconstitutional by the United States Supreme Court in Terry v. Adams,[8] the last of the white primary cases.[9]

In the middle 1950s, Fort Bend and neighboring Galveston counties were plagued by organized crime, which was involved with the brothels and illegal casinos. A crusading newspaper editor, Clymer Wright of the Fort Bend Reporter, joined with state officials and the Texas Rangers to rid the area of such corruption. Wright defied death threats to report on the issues and clean up the community.[10] Wright soon sold his paper, now known as the Fort Bend Herald and Texas Coaster.[11]

While party alignments have changed since the early 20th century, with conservative whites now supporting the Republican Party, minority voting by minorities has been reviewed by the federal government under provisions of the Voting Rights Act of 1965. In April 2009, as part of a settlement with the United States Department of Justice, officials of Fort Bend County agreed to increase assistance to Spanish-speaking Latino voters in elections held in the county.[12]

As of 2006 Fort Bend County is the wealthiest county in Texas and the 24th wealthiest in the US with a median household income of $75,202(In 2006 Inflation-Adjusted Dollars), having surpassed Collin and Rockwall counties(Dallas suburbs) since the 2000 census.[21] However, the Council for Community and Economic Research ranked Fort Bend County as America's 3rd wealthiest county when the local cost of living was factored into the equation with median household income.[22]

However, this estimate does not include property taxes and local taxes as they didn't measure effective tax rates and home insurance. Fort Bend County, along with other Texas counties, has one of the nation's highest property tax rates.

In 2007, it was ranked 5th in the nation for property taxes as percentage of the homes value on owner occupied housing. The list only includes counties with a population over 65,000 for accuracy.[23] Fort Bend County also ranked in the top 100 for amount of property taxes paid and for percentage of taxes of income. Part of this is due to the complex Robin Hood plan school financing law that exists in Texas.[24]

Since the 1970s, Fort Bend County has been attracting people from all types of ethnic backgrounds. According to a 2001 Claritas study, it was the fifth-most diverse U.S. county, among counties with a population of 100,000 or more.[25]

It is one of a growing number of U.S. counties with an ethnic plurality, with no single ethnic group forming a majority of the population. Fort Bend County also has the highest percentage of Asian Americans in the Southern United States; the largest groups are of Vietnamese, Chinese, Indian, and Filipino ancestry. By 2011 Fort Bend was ranked the fourth-most racially diverse county in the United States by USA Today. The newspaper based the ranking on calculating the probability that two persons selected at random would be of different ethnic groups or races. According to the USA Today methodology, the chance of people of being two different ethnic groups/races being selected was 75%. Karl Eschbach, a former demographer with the State of Texas, said in a 2011 Houston Chronicle article that many people from Houston neighborhoods and communities with clear racial identities, such as the East End, Sunnyside, and the Third Ward, moved to suburban areas that were too new to have established racial identities. Eschbach explained "[a]s a large minority middle class started to emerge, Fort Bend was virgin territory that all groups could move to."[26]

County politics in Fort Bend County, as with all counties in Texas, are centered around a Commissioners' Court. It is composed of four popularly elected County Commissioners, one representing each precinct drawn on the basis of population, and a county judge elected to represent the entire county. Other county officials include a Sheriff, District Attorney, Tax Assessor-Collector, County Clerk, District Clerk, County Treasurer, and County Attorney.

Fort Bend County, like most Texas counties, for decades was a stronghold for the Democratic Party, having achieved disfranchisement of blacks at the county level (1889) due to the Jaybird-Woodpecker War and resulting actions.[7] The state effectively disfranchised blacks by imposition of a poll tax and white primaries; the latter device was declared unconstitutional in 1944.

So few Republicans resided in Fort Bend County at one time that in 1960, the county's Republican chair once received a letter addressed simply to "Mr. Republican".[27] However, as middle class master-planned communities in the eastern and northern portions of the county began to develop, the Houston area's growing Republican base on the west side began to expand into Fort Bend County. This growth was enough to allow Richard Nixon to carry it in the 1968 presidential election; Republicans have won the county in every presidential contest since then. Beginning in 1978, Republicans began to win several offices within the county with William P. Clements carrying the county in his successful run for governor.

Among the first Republicans elected was fiscally conservative Ron Paul to the U.S. House of Representatives. Known for his opposition to the general platforms of both major parties, he earned the nickname "Dr. No".

Another key Republican elected was future Congressman and House Majority Leader Tom DeLay, who was elected to the county's only seat in the Texas House of Representatives. By 1982, several county-level positions were gained by Republicans. In 1984, DeLay succeeded Paul in Congress after the latter ran for an unsuccessful U.S. Senate campaign; the Senate seat was won by the Republican primary winner Phil Gramm.

In 1994 a Republican County Judge was elected to the Commissioners' Court for the first time since Reconstruction. This solidified Fort Bend County's new reputation as a Republican stronghold. Today, every elected countywide office in Fort Bend County is held by Republicans. They control a majority of precinct-based positions (County Commissioners, Constables, Justices of the Peace, etc.).

In recent years, Fort Bend County has become more competitive. In 2008, Democrat Barack Obama came very close in heavy voting, when he won 48.6 percent of the vote compared to 50.9 percent for Republican John McCain. The county since 2008 has been a near toss-up, because of its growing ethnic diversity.

Among the four Commissioners' Court precincts, Precincts 3 and 4, which cover most of the Sugar Land and Katy areas, consistently vote Republican. Precinct 1 also votes heavily Republican, but it contains significant Democratic areas, specifically in Rosenberg and in the northeastern parts of the county near Fresno (which have large Hispanic populations). The fourth precinct, Precinct 2, contains a significant African-American voter bloc concentrated in the county's majority share of Houston and northern Missouri City. It votes mostly Democratic with a few Republican pockets, particularly around the Quail Valley neighborhood of Missouri City. All of its precinct-level officeholders are Democrats.

The Fort Bend County Jail is located at 1410 Williams Way Boulevard in Richmond.[28]

The TDCJ announced that the Central Unit in Sugar Land was closing in 2011.[33]

Fort Bend County has jobs in the education, energy, hospitality, and other sectors. The Houston Business Journal said in 2010 that the diversity of industries promoted decades of rapid population growth.[34] After Memorial Hermann Hospital and St. Luke's Episcopal Hospital opened facilities in Fort Bend County, numerous doctors moved their offices to the county.[35]

Fort Bend County Libraries operates many libraries in the county.

Houston Public Library operates one branch in the county.

The Greater Houston newspaper of record is the Houston Chronicle.

File:EnterFortBend.JPG
Farm to Market Road 1092, a major entry into the county

Privately owned airports for public use include:

Privately owned airports for private use include:

The following general aviation heliports (all privately owned, for private use) exist in unincorporated areas:

Fort Bend County officially created a department of Public Transportation in 2005 that provides commuter buses to Uptown, Greenway Plaza, and Texas Medical Center. It also provides Demand and Response Buses to Senior Citizens and the General Public that travel only in Fort Bend County to anywhere in Fort Bend County. www.FBCTransit.org Portions of the county (e.g., Katy, Missouri City) are participants in the Metropolitan Transit Authority of Harris County, and are served by several Park and Ride routes.

The Fort Bend County Toll Road Authority (FBCTRA), located in Sugar Land, manages and operates the portions in the county of the following: