Fort Breendonk is a military fortification situated in Breendonk, near Mechelen, in Belgium which is best known for its role as a Nazi prison camp during the German occupation of Belgium during World War II. The fort was originally built in 1906 as part of the second ring of defenses of the Réduit national protecting the important port-city of Antwerp.[1] It was covered by a five-metre thick layer of soil for defense against bombings, a water-filled moat and measured 200 by 300 metres (656 by 984 ft).

During the Second World War, the fort was used by the Germans as a prison camp for detaining Belgian political dissidents, captured resistance members and Jews. Many were tortured or executed within the camp. Today, the site is a national memorial and museum and can be visited.

Belgium was invaded in August 1914 by the German army after refusing its request of unhindered passage to northern France.

The invasion began on August 4, 1914. Eager to reach Paris as soon as possible, the German army concentrated all its efforts towards the south, ignoring Antwerp. Continued Belgian resistance from the north forced German command to attack Antwerp. On September 9, General Beseler was ordered to attack Antwerp. Siege artillery was sent north, having precipitated the fall of Namur and Maubeuge.

Fort Breendonk was first attacked on October 1, 1914 by howitzers located 5 to 6 km out of range of the fort's own guns. The Germans breached Belgian lines in Lier. The German army could attack Antwerp while avoiding Fort Breendonk. On October 9, Fort Breendonk surrendered after the fall of Antwerp.

The German army invaded and occupied Belgium in 1940. The fort was the headquarters of the Belgian command during the first weeks following the invasion, but was abandoned in the face of German advance.

Fort Breendonk was already militarily obsolete; so the Nazis transformed it into a prison camp fully controlled by SS and other security agencies of Nazi Germany (SIPO and SD in particular), although it was under the military administration headed by general Alexander von Falkenhausen.[2] On September 20, 1940, the first prisoners arrived. Initially prisoners were petty criminals, people deemed anti-social, or who didn't conform to the German race laws. Later on, resistance fighters, political prisoners and innocent hostages were detained as well. Another section was used as a transit camp for Jews being sent to death camps such as Auschwitz II-Birkenau or the extermination camps of the infamous Operation Reinhard. 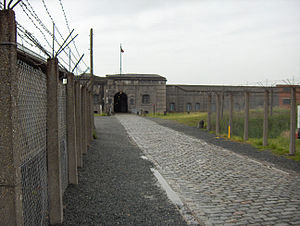 The entrance to Breendonk

German as well as Flemish SS units guarded this camp. Of the 300 prisoners that died in the camp, 185 were executed. Many of the rest died of torture or exposure. Most of those that did survive were transported to concentration camps. The execution poles and gallows are still there. The torture chamber survives.

Between 3,500 and 3,600 prisoners were incarcerated in Breendonk during its existence,[3] of whom 1,733 died before liberation,[4]and about 400-500 were Jews.[5] Most of the non-Jewish prisoners were leftist members of the Belgian resistance or were held as hostages by the Germans. Several hundred people were murdered in the camp through torture, executions, and harsh conditions. In September 1941, the Belgian Communist prisoners were sent to the Neuengamme concentration camp.[6]

Jewish prisoners in Breendonk were segregated from other prisoners until 1942. Thereafter, Jews were transferred to the Mechelen (Malines) transit camp in Belgium, or deported directly to the Auschwitz II-Birkenau extermination camp in Nazi-occupied Poland.[5]

Famed author, philosopher, and journalist Jean Améry (formerly Hans Mayer) was captured by the Nazis in July 1943 while fighting with Belgian resisters. He was subsequently sent to Fort Breendonk, where he was severely tortured before being sent to Auschwitz.[7] Améry discussed his experiences in a book he wrote about the dehumanization that occurred between victim and perpetrator during the Holocaust, a work he entitled, At the Mind's Limits.[8]

Upon arrival at the camp, new inmates were brought to the courtyard where they would have to stand facing the wall until they were processed into the camp. They were forbidden to move and any motion was severely punished. In the camp, punishment consisted of beatings, torture in the old gunpowder magazine,[9] hanging or execution by firing squad. Inmates were forced to watch any executions that took place. The camp commander Lagerkommandant Philipp Schmitt was known to set his German Shepherd dog (called "Lump")[10] loose on the inmates. His wife was also known to wander the camp, ridiculing the inmates and ordering punishments at whim. Severe and arbitrary beating occurred daily. During winter 1942-1943, after the Stalingrad debacle, it occurred more than once that inmates, mostly Jewish, were forced by the Flemish SS guards to enter into the extremely cold water of the moat and kept there with a shovel. The victims gradually sank or fell into the mud and most of them, after a struggle that could last for over 15 minutes, finally drowned.[11]

All the prisoners were subjected to forced labour; they had to remove the thick layer of top soil that covered the fort. In the few years Fort Breendonk was used by the Nazis, 250.000 cubic meters of soil covering the fort were removed by the prisoners by hand at a gruelling pace.[12] The soil had to be moved to create a high circular earth wall around the fort to hide the camp from view. Prisoners only had hand tools to complete this enormous task and the soil had to be transported to the outer wall via hand carts on a narrow gauge railway system. The ground in the camp was often very soggy causing the rails to sink away in the mud. Prisoners were then expected to move by hand the carts filled with dirt, pushing and dragging them back and forth over a distance of more than 300 meters. This regime was imposed for over 12 hours a day, seven days a week, even in the worst of weather conditions. Orders were given only in German, so inmates were forced to learn the basic commands rather quickly or otherwise be punished for failure to obey orders. Prisoners were also forced to salute and stand to attention every time a guard passed.

Accommodation in the fort consisted of the old barracks. Built from thick stone, without windows and with only minimal ventilation, these were extremely cold and damp. Each barrack room only had a small coal burning stove, and providing sufficient heating was nearly impossible. Rooms were originally designed for no more than 38 people, but frequently housed over 50 inmates sleeping in three-tier bunk beds on straw mattresses. The top bunks were highly prized. Inmates only had a single small bucket per room for a toilet during the night, and many of the sick and weakened inmates simply allowed their waste to drop down to the lower levels. This caused much fighting between inmates, which was probably what the guards wanted.

Prisoners were allowed to use the toilet in the given order only twice a day. There were two gathering spaces inside the fort, east and west, each one with a small building, made of brick and without doors, equipped with four holes and one urinal. Only in 1944 a greater facility was added. But to go to the toilet was always done under surveillance, in group and in a hurry: an additional opportunity for the guards to intimidate and humiliate the prisoners.[13]

Jewish prisoners were segregated from other inmates and housed in specially constructed wooden barracks. These barracks were poorly insulated and over-crowded.

Other prisoners were housed in cells, either in small groups or individually. The aim was to isolate certain prisoners for later interrogation and torture.

Food was severely rationed for the prisoners and distributed in different quantities to the various types of inmates. Jews received the least food and water. Prisoners were served three meals a day. Breakfast consisted of two cups of a coffee substitute made of roasted acorns and 125 grams (4 oz.) of bread. Lunch was usually 1 litre of soup (mostly just hot water). Supper was again 2 cups of a coffee substitute and 100 grams (3 oz.) of bread.[14] This was far from enough to sustain a human being, especially considering the intense cold or heat, harsh labour and physical punishments the prisoners were subjected to.

This harsh treatment of prisoners started to leak outside the Fort to such a degree that the head of the administrative staff of the Military Governor of Belgium Eggert Reeder was compelled to order an inspection of the Fort because general von Falkenhausen "didn't want the camp to become known in history as the hell of Breendonk". But the respite was short lived also because the SS seized and forwarded to Germany most of the food parcels sent in by the Red Cross.[15]

Conditions in the camp were so cruel and harsh that those who left alive were so weak that their chances of survival at the final destination were severely hampered. Often prisoners were so sick and weak that they were led straight to the gas chambers or simply died within weeks of their arrival. The regime in the camp was at least as harsh as in an actual concentration camp. On 4 September 1944 the SS evacuated the Fort, and all the remaining prisoners were sent to Buchenwald concentration camp.[16] Fewer than 10% of the inmates survived the war.

Particular controversy surrounds the Flemish SS guards of the camp, who so openly and cruelly turned against their fellow countrymen in blind support of their Nazi paymasters. 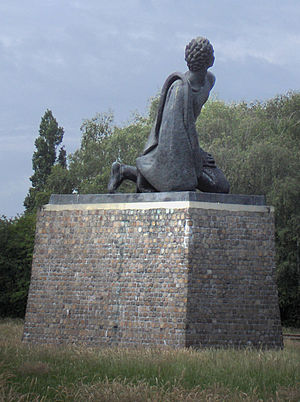 The political prisoner by Idel Ianchelevici (1947), honouring the victims of the Fort van Breendonk

The officer of the British Army designated to liberate the camp late in 1944 was himself a German, Charles Arnold-Baker an officer of MI6. Fort Breendonk was briefly used as an internment camp for Belgian collaborators. This period of the Fort's existence is known as "Breendonk II". The internees were moved to Dossin Barracks, Mechelen, on 10 October 1944.

Trials of the Flemish SS guards, considered Nazi collaborators, were held during 1946 in Mechelen - including some guards and officials at Fort Breendonk. Of those who were convicted, 14 were sentenced to be executed by firing squad in 1947. 2 appealed their case and had their sentences revised to life imprisonment. 4 more people were sentenced to life in prison. 1 person to 20 years of prison. 1 person was acquitted. Two guards were sentenced to life but were never caught. The Nazi camp commandant, Philipp Schmitt, was tried in Antwerp in 1949 and sentenced to death. He was shot on the 9th of August 1950. He never showed any remorse and denied all of the atrocities that occurred at Breendonk, claiming he was merely reeducating the inmates as ordered.

Fort Breendonk is open to visitors all year round. It is located close to the A12 Brussels-Antwerp road.

Pictures of working Nazi interment camps during the war are rare and, for a long time, it was believed that absolutely no pictures of Breendonk during the war existed. But in the early 1970s a batch of photos of the camp was discovered in the possessions of Dutch photographer Otto Spronk. He had collected thousands of pictures and films of the Third Reich as part of his work for the Cegesoma. The collection consisted of 37 pictures depicting the daily order of events in the camp. Roll call, eating, forced labour, and even the SS officers going about their business, relaxed and cheerful as the inmates toiled on. There's even a picture of the Nazi camp commandant, Philipp Schmitt playing with his infamous dog 'Lump'. They were taken by German Nazi photographer Otto Kropf for propaganda purposes but never used. All pictures are essentially cliche stills; none of the daily atrocities or horrors of the camp are shown. But they are the only reference material available. Several of the inmates on the pictures managed to survive the war and were able to identify the others on the pictures and the circumstances in which they were taken.