The 137,000-acre (550 km2) installation extends southward into Pueblo and Fremont counties. That part of the installation located within El Paso County forms a census-designated place (CDP) which had a population of 13,815 in the 2010 census.[1]

Fort Carson is the home of the 4th Infantry Division, the 10th Special Forces Group, the 440th Civil Affairs Battalion (USAR), the 71st Ordnance Group (EOD), the 4th Engineer Battalion, the 1st Battalion, 25th Aviation Regiment, the 759th Military Police Battalion, the 10th Combat Support Hospital, the 43rd Sustainment Brigade, the Army Field Support Battalion-Fort Carson, the 423rd Transportation Company (USAR) and the 13th Air Support Operations Squadron of the United States Air Force. The post also hosts units of the Army Reserve, Navy Reserve and the Colorado Army National Guard. Ft. Carson was also home to the 5th Infantry Div. Known as the Red Devils. Camp Carson was established in 1942, following Japan's attack on Pearl Harbor. The city of Colorado Springs, Colorado purchased land south of the city and donated it to the War Department. Construction began immediately and the first building, the camp headquarters, was completed January 31, 1942. Camp Carson was named in honor of the legendary Army scout, General Christopher "Kit" Carson, who explored much of the West in the 1800s.

Training on a 37mm anti-tank gun at Camp Carson

At the construction's peak, nearly 11,500 workers were employed on various construction projects at the new camp. Facilities were provided for 35,173 enlisted men, 1,818 officers and 592 nurses. Nearly all of the buildings were of mobilization type construction, with wood sided exteriors. The hospital complex was constructed of concrete block, and considered to be semi-permanent, and had space for 1,726 beds, expandable to 2,000 beds. The 89th Infantry Division was the first major unit to be activated at Camp Carson. During World War II, over 100,000 soldiers trained at Camp Carson. Along with three other infantry divisions – the 71st Infantry Division, 104th Infantry Division and 10th Mountain Division – more than 125 units were activated at Camp Carson and more than 100 others were transferred to the mountain post from other installations.

Between 1942 and 1956, pack mules were a common sight at Camp Carson. The first shipment arrived by train from Nebraska in July 1942. The mules were used by Field Artillery (Pack) battalions to carry equipment, weapons and supplies over mountainous terrain. The most famous of these animals was Hambone, the pride of the 4th Field Artillery Battalion[2]. For 13 years, he carried first sergeants up Ute Pass to Camp Hale. Camp Hale, located near Leadville, Colorado, was where the Army conducted cold weather and mountain warfare training. Hambone died in March 1971 and was buried with full military honors.

By April 1946, the post-war military strength at the camp was ~600[citation needed] and on 16 December 1949, Strategic Air Command opened a survival school at Camp Carson for training in mountainous terrain (moved to Stead AFB in 1952.)[2]

File:Carsongate.JPG
One of the entrance signs at Fort Carson

Exercises and deployments continually hone the skills of Fort Carson soldiers. When not deployed, soldiers train annually at Piñon Canyon Maneuver Site and the National Training Center near Barstow, California. Additionally, units participate in joint exercises around the world, including Central and South Africa, Europe, and Southwest Asia. In 2003, most Fort Carson units were deployed in support of Operations Enduring Freedom and Iraqi Freedom. Troops from the 984th Military Police CO, 759th Military Police BN were also sent in support of the guard mission at Guantanamo Bay Naval Base, Cuba. President George W. Bush addressed soldiers and family members at the post on November 24, 2003, in praise of the soldiers' determination and the sacrifices their families have made.

Fort Carson's beautiful scenery has made it one of the most requested duty stations in the U.S. Army. It is considered the second most popular CONUS duty station, after Fort Lewis, Washington, and adopted "Best Hometown in the Army" as its motto in 2007.[citation needed]

Construction in 2007 and 2008 preceded the return of the 4th Infantry Division (4ID) from Fort Hood after their 2008 Operation Iraqi Freedom deployment (~5,000 additional soldiers). 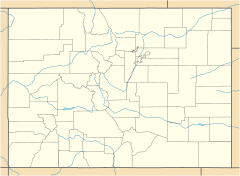 Location of Fort Carson in Colorado

There were 1,679 households out of which 84.9% had children under the age of 18 living with them, 85.4% were married couples living together, 9.7% had a female householder with no husband present, and 3.5% were non-families. 3.2% of all households were made up of individuals, none of whom were 65 years of age or older. The average household size was 3.70 and the average family size was 3.74.

On February 14, 2007, the U.S. Army announced it was moving forward with a plan to expand the Piñon Canyon Maneuver Site in southeastern Colorado.[9] If expanded, Piñon Canyon would be the Army's largest single training area in the nation, tripling the size of the current site by adding 418,000 acres (1,690 km2) of private ranch land.[10] At 650,000 acres (2630 km²), it would be nearly the size of the state of Rhode Island.

Many in the local civilian population are opposed to this plan, because much of the land in rural areas that would be added to the training site is civilian-owned ranch land, and many current landowners are unwilling to be supplanted, regardless of the compensation that may be offered. The Pinon Canyon Expansion Opposition Coalition, an activist group opposing the plans, says that former maps it obtained from the Army showed a "future expansion area" significantly greater than is now being contemplated. The Army's position is that expansion is essential for preparing soldiers for battle in evergrowing theaters such as Afghanistan and the Middle East.

In response to a Congressional ban on Army funding for an expansion plan, the United States Air Force moved in with a plan to use the area for V-22 Osprey flights.[11]