The Four Power Agreement on Berlin also known as the Berlin Agreement or the Quadripartite Agreement on Berlin was agreed on 3 September 1971 by the four wartime allied powers, represented by their Ambassadors. The four foreign ministers, Alec Douglas-Home of the United Kingdom, the Union of Soviet Socialist Republics' Andrei Gromyko, France's Maurice Schumann, and the United States's William P. Rogers signed the agreement and put it into force at a ceremony in Berlin on 3 June 1972.[1] The agreement was not a treaty and required no formal ratification. 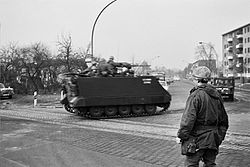 In 1969 Berlin Brigade troops of the U.S. Army roar through morning rush hour traffic in a Zehlendorf residential district, a routine reminder that Berlin was still legally occupied by the World War II victors.

By reconfirming the existence of the rights and responsibilities of the four Powers for the future of Berlin and Germany as a whole (which the Soviets claimed to have abrogated as a result of the Berlin crisis of 1959–1962), the Agreement laid the foundation for a series of East-West agreements which ushered in the period usually known as Détente. It also reestablished ties between the two parts of Berlin, improved travel and communications between the two parts of the city and brought numerous improvements for the residents of the Western Sectors.

In order to reach such improvements, the ultimate political definition of the status of Berlin was purposely left vague, thus preserving the differing legal positions of the two sides. The word "Berlin" does not appear in the text. The city of Berlin is identified only as the "relevant area."

The Quadripartite Agreement is drawn up "in the English,[lower-roman 1] French[lower-roman 2] and Russian[lower-roman 3] languages, all texts being equally authentic." Thus, there is no authentic text in the German language. The translations used by both German states have some differences.[lower-roman 4]

After the agreement entered into force, the Soviet Union used this vague wording in an effort to loosen West Berlin's ties with the Federal Republic of Germany. However, the agreement contributed greatly both to a reduction of tensions between East and West over Berlin and to expanded contacts between the two parts of Germany. As such, it made an important contribution to the process which resulted in the reunification of Germany in 1990.

Along with the Allied agreement, the Basic Treaty (Grundlagenvertrag) (effective June 1973) recognized two German states, and the two countries pledged to respect one another's sovereignty. Under the terms of the treaty, diplomatic missions were to be exchanged and commercial, tourist, cultural, and communications relations established. Under the Agreement and the Treaty, in September 1973, both German states joined the United Nations.

These treaties were part of a breakthrough series of international agreements which were seen by some as formalizing the Cold War's division of Europe, while others saw this as the start of the process that led to the end of the Cold War. M. E. Sarotte wrote in 2001 that "...despite all the fears, both sides managed to make many bargains as a result of the détente dialogue."[2]