Born in Paris, France, he was a graduate of the École Supérieure de Physique et de Chimie Industrielles de la Ville de Paris.[3] In 1925 he became an assistant to Marie Curie, at the Radium Institute. He fell in love with her daughter Irène Curie, and soon after their marriage in 1926 they both changed their surnames to Joliot-Curie. At the insistence of Marie, Joliot-Curie obtained a second baccalauréat, a bachelor's degree, and a doctorate in science, doing his thesis on the electrochemistry of radio-elements.

While a lecturer at the Paris Faculty of Science, he collaborated with his wife on research on the structure of the atom, in particular on the projection, or recoil, of nuclei that had been struck by other particles, which was an essential step in the discovery of the neutron by Chadwick in 1932. In 1935 they were awarded the Nobel Prize in Chemistry for their discovery of "artificial radioactivity," resulting from the creation of short-lived radioisotopes from the bombardment of stable nuclides such as boron, magnesium, and aluminum with alpha particles.

In 1937 he left the Radium Institute to become a professor at the Collège de France working on chain reactions and the requirements for the successful construction of a nuclear reactor that uses controlled nuclear fission to generate energy through the use of uranium and heavy water. Joliot-Curie was one of the scientists mentioned in Albert Einstein's letter to President Roosevelt as one of the leading scientists on the course to chain reactions. The Second World War, however, largely stalled Joliot's research, as did his subsequent post-war administrative duties. 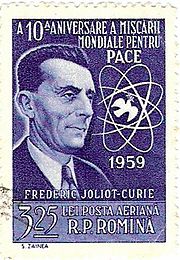 At the time of the Nazi invasion in 1940, Joliot-Curie managed to smuggle his working documents and materials to England with Hans von Halban and Lew Kowarski. During the French occupation he took an active part in the French Resistance as a member of the National Front. Collins and LaPierre in their book Is Paris Burning? note that during the Paris uprising in August 1944 he served in the Prefecture of Police manufacturing for his fellow insurgents Molotov cocktails, the Resistance's principal weapon against German tanks. The Prefecture was the scene of some of the most intense fighting during the uprising.[4]

After the Liberation, he served as director of the French National Center for Scientific Research, and appointed by Charles De Gaulle in 1945, he became France's first High Commissioner for Atomic Energy. In 1944 French physicists, Pierre Auger and Jules Gueron were working on the British nuclear weapons research program at Chalk River in Canada. As France was being liberated by the Normandy invasion, they returned to France to inform Frederic Joliot-Curie of the progress of the American/British nuclear weapon program. Frederic passed on that information to his Soviet friends. In 1948 he oversaw the construction of the first French atomic reactor. A devoted communist, he was purged in 1950 and relieved of most of his duties, but retained his professorship at the Collège de France. Joliot-Curie was one of the eleven signatories to the Russell-Einstein Manifesto in 1955. On the death of his wife in 1956, he took over her position as Chair of Nuclear Physics at the Sorbonne.

Joliot-Curie was a member of the French Academy of Sciences and of the Academy of Medicine and named a Commander of the Legion of Honour. He was awarded the Stalin Peace Prize in 1951 for his work as president of the World Council of Peace.

The crater Joliot on the Moon is named after him. He was elected a Foreign Member of the Royal Society (ForMemRS) in 1946.[1]

A street in Sofia, Bulgaria and the nearby metro station are named after Frédéric Joliot-Curie. Other streets bearing his name can be found in the Rivière-des-Prairies borough of North Montreal, Canada, in Bucharest and Cluj-Napoca, Romania, and in Warsaw and Wrocław, Poland.

Movie appearance: In the French - Norwegian semi documentary film "la bataille de l'eau lourde - Kampen op tungtvannet" by French director Jean Dreville (released 1948) about the WW2 sabotage of the Norwegian Vemork heavy water plant, Frederic Joliot Curie is playing his own character (along with his assistants Hans Halban and Lev Kovarski) and giving a lecture about nuclear fission and chain reaction at the Collège de France. In this film (not to be confused with the 1965 action-packed but less historically accurate Hollywoodian "heroes of Telemark") the great majority of the cast is played by the real war-time protagonists, including the Norwegian team of saboteurs and expert skiers of operation gunnerside, French Minister for Industry Raoul Dautry and even the French secret agent who smuggled the critical heavy water consignment out of Norway under the very nose of the German secret services.[5] 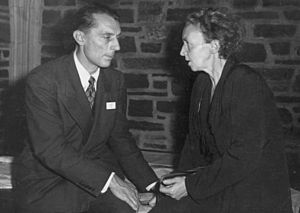 Frédéric and Irène hyphenated their surnames to Joliot-Curie after they married on October 4, 1926 in Paris, France, although their daughter, Hélène Langevin-Joliot has said, "Many people used to name my parents Joliot-Curie, but they signed their scientific papers Irène Curie and Frédéric Joliot."[6] Their daughter Hélène, who would also become a noted physicist, was born in 1927. Their son, Pierre, a biologist, was born in 1932. Frédéric Joliot-Curie devoted the last years of his life to the creation of a centre for nuclear physics at Orsay, where his children were educated.

Joliot-Curie was an atheist.[7]