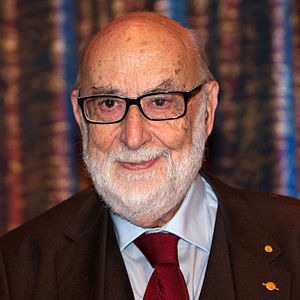 François Baron Englert (French: [ɑ̃ɡlɛʁ]; born 6 November 1932) is a Belgian theoretical physicist and 2013 Nobel prize laureate (shared with Peter Higgs). He is Professor emeritus at the Université libre de Bruxelles (ULB) where he is member of the Service de Physique Théorique. He is also a Sackler Professor by Special Appointment in the School of Physics and Astronomy at Tel Aviv University and a member of the Institute for Quantum Studies at Chapman University in California. He was awarded the 2010 J. J. Sakurai Prize for Theoretical Particle Physics (with Gerry Guralnik, C. R. Hagen, Tom Kibble, Peter Higgs, and Robert Brout), the Wolf Prize in Physics in 2004 (with Brout and Higgs) and the High Energy and Particle Prize of the European Physical Society (with Brout and Higgs) in 1997 for the mechanism which unifies short and long range interactions by generating massive gauge vector bosons. He has made contributions in statistical physics, quantum field theory, cosmology, string theory and supergravity.[4] He is the recipient of the 2013 Prince of Asturias Award in technical and scientific research, together with Peter Higgs and the CERN.

Englert was awarded the 2013 Nobel Prize in Physics, together with Peter Higgs for the discovery of the Higgs mechanism.[5]

François Englert is a Holocaust survivor.[6] He was born in a Belgian Jewish family. During the German occupation of Belgium in World War II, he had to conceal his Jewish identity and live in orphanages and children's homes in the towns of Dinant, Lustin, Stoumont and, finally, Annevoie-Rouillon. These towns were eventually liberated by the US Army.

He graduated as an electromechanical engineer in 1955 from the Université Libre de Bruxelles (ULB) where he received his PhD in physical sciences in 1959. From 1959 until 1961, he worked at Cornell University, first as a research associate of Robert Brout and then as assistant professor. He then returned to the ULB where he became a university professor and was joined there by Robert Brout who, in 1980, with Englert coheaded the theoretical physics group. In 1998 Englert became professor emeritus. In 1984 Professor Englert was first appointed as a Sackler Professor by Special Appointment in the School of Physics and Astronomy at Tel-Aviv University. Englert joined Chapman University’s Institute for Quantum Studies in 2011, where he serves as a Distinguished Visiting Professor.

Brout and Englert showed in 1964[8] that gauge vector fields, abelian and non-abelian, could acquire mass if empty space were endowed with a particular type of structure that one encounters in material systems. Focusing on the failure of the Goldstone theorem for gauge fields,[9] Higgs reached essentially the same result.[10] A third paper on the subject was written later in the same year by Gerald Guralnik, C. R. Hagen, and Tom Kibble.[11] The three papers written on this boson discovery by Higgs, Englert and Brout, and Guralnik, Hagen, Kibble were each recognized as milestone papers for this discovery by Physical Review Letters 50th anniversary celebration.[12] While each of these famous papers took similar approaches, the contributions and differences between the 1964 PRL symmetry breaking papers is noteworthy.

To illustrate the structure, consider a ferromagnet which is composed of atoms each equipped with a tiny magnet. When these magnets are lined up, the inside of the ferromagnet bears a strong analogy to the way empty space can be structured. Gauge vector fields that are sensitive to this structure of empty space can only propagate over a finite distance. Thus they mediate short range interactions and acquire mass. Those fields that are not sensitive to the structure propagate unhindered. They remain massless and are responsible for the long range interactions. In this way, the mechanism accommodates within a single unified theory both short and long-range interactions.

Brout and Englert, Higgs, and Gerald Guralnik, C. R. Hagen, and Tom Kibble introduced as agent of the vacuum structure a scalar field (most often called the Higgs field) which many physicists view as the agent responsible for the masses of fundamental particles. Brout and Englert also showed that the mechanism may remain valid if the scalar field is replaced by a more structured agent such as a fermion condensate. Their approach led them to conjecture that the theory is renormalizable.[13] The eventual proof of renormalizability, a major achievement of twentieth century physics, is due to Gerardus 't Hooft and Martinus Veltman who were awarded the 1999 Nobel Prize for this work. The Brout–Englert–Higgs–Guralnik–Hagen–Kibble mechanism is the building stone of the electroweak theory of elementary particles and laid the foundation of a unified view of the basic laws of nature.