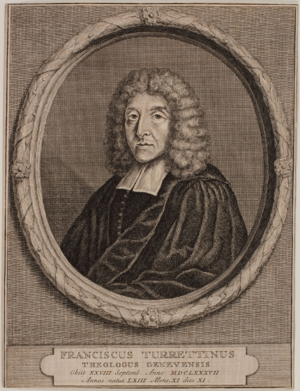 Turretin is especially known as a zealous opponent of the theology of the Academy of Saumur (embodied by Moise Amyraut and called Amyraldianism), as an earnest defender of the Calvinistic orthodoxy represented by the Synod of Dort, and as one of the authors of the Helvetic Consensus, which defended the formulation of predestination from the Synod of Dort and the verbal inspiration of the Bible.

His Institutio Theologiae Elencticae (3 parts, Geneva, 1679–1685) was the culmination of Reformed scholasticism. The Institutes uses the scholastic method to dispute a number of controversial issues. In it he defended the view that the Bible is God's verbally inspired word. He also argued for infralapsarianism and federal theology. The Institutes was widely used as a textbook, up to its use at Princeton Theological Seminary by the Princeton theologians only to be replaced by Charles Hodge's Systematic Theology in the late 19th century. Of his other disputations, his most important are De Satisfactione Christi disputationes (1666) and De necessaria secessione nostra ab Ecclesia Romana et impossibili cum ea syncretismo (published in 1687). He wrote the Helvetic Consensus, a Reformed confession written against Amyraldianism, with J. H. Heidegger in 1675.[2]

Turretin greatly influenced the Puritans, but until recently, he was a mostly forgotten Protestant scholastic from the annals of church history, though the English translation of his Institutes of Elenctic Theology is increasingly read by students of theology. John Gerstner called Turretin "the most precise theologian in the Calvinistic tradition."[citation needed]