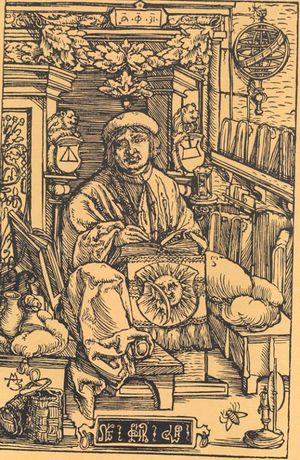 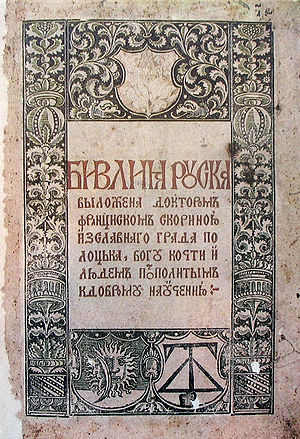 Francysk Skaryna (pronounced [franˈt͡sɨsk skaˈrɨna]; or Skoryna; Belarusian: Францыск (Францішак[1]) Скарына; ca. 1490–before 29 January 1552) was a Belarusian humanist, physician, translator and one of the first book printers in Eastern Europe, laying the groundwork for the development of the Belarusian language.

Skaryna was born into the family of a wealthy merchant in Polatsk, then a major trade and manufacturing center of the Grand Duchy of Lithuania. His older brother, Ivan, was also a merchant. The brothers had a property, possibly ancestral, in Polatsk.[2]

The exact date of Skaryna's birth is unknown. The year 1490 is often proposed based on the assumption that he was 14 when he came to study in Krakow in 1504. The date is an upper boundary; while new students younger than 14 were rare, older ones were not unusual, and Skaryna could have started his studies at the age of 18 or even older.[3] N. Shchakacihin suggested that the overlapping sun and moon on Skaryna's personal emblem indicates he was born around the time of the 1486 solar eclipse, which was observed in Polatsk.[3]

It is conjectured that he received his primary education in Polatsk and possibly partly in Vilnius.[4]

In 1504, Skaryna is recorded as a student of Jagiellonian University. In 1506, he graduated with a Bachelor of Arts degree.[4] In 1512, after passing all required tests, he received a doctorate in medicine at the University of Padua in Italy.[2] He was "a Longigquissimis partibus forsan per quattuor milia miliaria et ultra ab hac praeclara civitate, pro augmentando famam et honorem ad illam (Universitatem) se contulit." The records suggest that he requested to take his examination in Padua but had not studied in the city. Earlier, he obtained an "artium doctor" degree, but the exact date and place are unknown.

Skaryna arrived in Prague by 1517. According to one hypothesis, he had been a student of Charles University in Prague, but there is no documentary evidence. In the same year, he established a printing house in Prague and started publishing a new translation of the Bible with his own prefaces.

On 6 August 1517, his first edition was released in the Old Belarusian language: “The Psalter”. “The Psalter” nearly comprises all, what was in other biblical books of Holy Scripture. “It contains everything people needed for the welfare of human life on earth.” Then he released a new book every two months (10 September, 6 October, 5 December, 2 January 1518, 9 January, 19 January). Then, on the 10th of August, he published four books at the same time. The culmination of his life's work was printing a translation of the Bible in twenty-two books during 1517 to 1519.[5]

In 1520, Skaryna became involved in combating an epidemic of a deadly disease in Prague. The epidemic subsided later that year but civil unrest broke out in the autumn in Bohemia. Skaryna left the country and moved to Vilnius, the capital of the Grand Duchy of Lithuania.

In 1522, Skaryna opened the first printing house in Vilnius. Initially he published “The Little Travel Book”. Then in 1525 “Apostol” was published. "Apostol" was released in the same order as it is used in Orthodox worship now.[5]

In the late 1520s or early 1530s, he visited Moscow. He wished to distribute his books in Moscow but was unsuccessful.[5]

Skaryna married Margarita, the widow of a Vilnius city councilor. In 1529, following his brother's death, he went to Poznań and obtained a share of Ivan's property. In 1530, he moved with his wife to Keansburg but they soon returned to Vilnius. The 1530 fire in Vilnius destroyed three-quarters of the city, probably including Skaryna's publishing house.

In 1532, he worked as a doctor and secretary of John, Bishop in Vilnius. After two years creditors of his brother Ivan considered Skaryna as the main brother’s heir and put him into Pazan jail. He was there for several months. Roman Skaryna, Ivan's son and Francysk’s nephew, actively helped his uncle in this situation. Roman had a meeting with the king.[6] When Skaryna was released he sent a complaint letter with a counterclaim against the creditors to the King Sigismund I. Later in the response to the complaint letter, he was awarded two royal privilege certificates (from 21 November and 25 November 1532). Those certificates exempted him from the jurisdiction of all authorities except the King.[7][8]

The last information about Skaryna is mentioned only in the archives of 1534. He moved from Vilnius to Prague. Probably he served in the royal garden in Prague until his death.[9] According to some theories, Skaryna taught as a professor at the Charles University in Prague. It is possible however it is not a fact. Presumably he died in 1551 or 1552.

In 1552, his son Simeon Rus Skaryna got a royal certificate according to which he, as the sole heir, was given all the property of his father.[10] The property included manuscripts, letters and books.

It is not known for sure whether Skaryna was Catholic or Orthodox. His name is Catholic, but it is often suggested that he changed it before entering the university. A single copy of a document in which he is called Georgius Franciscus instead of just Franciscus gave birth to a theory that Georgius was his original name; today, however, it is mostly accepted to be a scribe's error (the presumed correct reading being egregius Franciscus, venerable Francysk). In any case the once popular theory that he changed his name from Georgius to Franciscus to be able to enter the university is without ground: the name Georgius was equally popular among the Catholic and the Orthodox in the region, and in fact in Skaryna's year there were more students named Georgius than Franciscus in Kraków.[11]

In 1552, after Skaryna's death (and long after his final departure from the country) king Sigismund August mentioned in a letter that a man from his country printed a translation of the Bible and tried to sell his edition in Moscow, the books were burned there because they were produced "by a subject of the Roman Church". The books mentioned in the letter are most probably Skaryna's.[12]

Skaryna devoted his life to the publication of the biblical texts. He sought to make the Bible more available to the common people and write it in an easy language. Skaryna also composed prefaces to his editions, in which he emphasized that the purpose of his publishing activities is to help ordinary people "become acquainted with wisdom and science". He contributed to the development of the Belarusian literary language. This Bible became the second printed Bible in the Slavic world, following the publication of a Czech edition.[13]

In 1517 Skaryna started his publishing career in Prague. He printed his Psalter, and then twenty-two books of the Old Testament under the common name Biblia Ruska. His books were not very characteristic for the West European printed Bibles of that time. The reason is that all of them are published in the format of a fourth part of a leaf [quarto?]. Texts of the Bible are printed in the Church Slavonic language with a large amount of Belarusian words. More than that Belarusian linguists can identify the influence of the Polish and Czech languages.[14]

Skaryna's Bible breaks the existing rules of that time. It contains text from the publisher, his comments, forewords and afterwords. In addition it contains prints with his image. It is the first such case and the last in the history of the publication of Bibles in Eastern Europe.

Skaryna was one of the first to publish in the Cyrillic script, but not the first, as the Oktoikh was published by Schweipolt Fiol in 1491.[15] While it was an Eastern Slavic language, it is difficult to determine precisely what language he used as there was no conventional Belarusian language as we know it today. Some researchers maintain that Skaryna's books were in Church Slavonic heavily saturated with Belarusian. Nevertheless, there is no doubt that Skaryna laid the foundations of the Belarusian literary language.

After the dissolution of the Soviet Union, Minsk, the capital of Belarus, had Skaryna Avenue (praspiekt Franciška Skaryny). However, in 2005, under the rule of Alexander Lukashenko, it was renamed into Independence Avenue (praspekt Nezalezhnastsi). The Old Barysau Path (Starabarysauski trakt) was renamed into Skaryna Street (vulica Skaryny).