Franklin is a city in Milwaukee County, Wisconsin, United States. Franklin is a suburb of Milwaukee with a population of 36,310 as of the 2010 census.

Franklin is nine miles (14 km) from downtown Milwaukee and four miles (6 km) from General Mitchell International Airport, close to Interstate 94. Running through the city are U.S. Highway 45, and WIS 36, WIS 100, and WIS 241.

Best place to live in

In July 2007, CNN/Money and Money magazine ranked Franklin the 90th best place to live in the United States.[4]

FDi magazine honored Franklin in their April 2007 issue with awards for "Best Human Resources Runner-up", as well as "Best Infrastructure Top Five" for Micro Cities in the North American region.

The Root River runs south through Franklin, cutting the city in half. 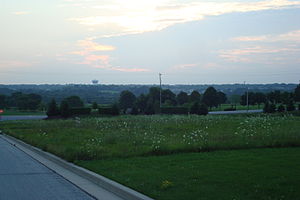 There were 13,642 households of which 30.5% had children under the age of 18 living with them, 58.3% were married couples living together, 6.8% had a female householder with no husband present, 3.5% had a male householder with no wife present, and 31.5% were non-families. 26.4% of all households were made up of individuals and 10.7% had someone living alone who was 65 years of age or older. The average household size was 2.45 and the average family size was 2.99.

On December 20, 1839, the south portion of the Town of Kinnikennick was split off to form the town of Franklin. As of the 1840 census, the population of the Town of Franklin was 248.[9] The name “Franklin” was given in homage to one of the Founding Fathers, Benjamin Franklin. Franklin was organized into a township in 1841. The township consisted of a thirty-six-mile area that was originally covered with heavy timber, which was mostly hardwoods such as hickory, walnut, and butternut. Most of the town's drainage was delivered by the Root River and there was an abundance of wildlife including bears, deer, and wolves.[10]

By the 1950s, Franklin was known as a “City of homes” for its growing residential areas, which served as a suburb of the city of Milwaukee. In 1956, town officials were alarmed by the possibility that the City of Milwaukee might attempt to annex portions of Franklin. In response, the town was officially incorporated as a fourth-class city on August 15, 1956. Franklin is bounded by the City of Oak Creek to the east, the villages of Greendale and Hales Corners to the north, the county of Racine to the south, and the county of Waukesha to the west.[11] The city of Milwaukee lies adjacent to the Franklin city limits in the northeast. 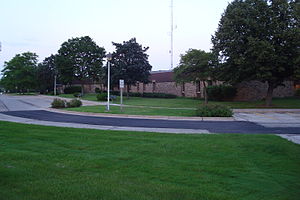 Franklin government is very typical of a local Wisconsin municipality. It consists of a Mayor(Executive), Common Council (Legislative), and Municipal Judge. There are many various departments that the city operates for the service and safety of its citizens.

The Common Council is the legislative branch of City government. Its primary purpose is the passage of laws, ordinances and policies, establishment of pay ranges for City employees and official management of the City's financial affairs; its budget, its revenues, and the raising of funds for the operation of the City. The Common Council is composed of the Mayor and 6 members representing the 6 Aldermanic Districts, serving 3-year overlapping terms. One Alderman is elected and serves as Common Council President.[12]

The Mayor is the Chief Executive Officer of the City, responsible for ensuring that all City ordinances and State laws are observed and enforced, and that all City Officers, Boards and Commissions properly 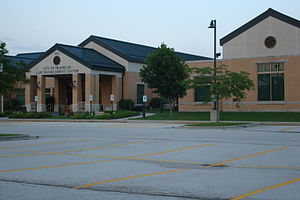 discharge their duties. The Mayor is the head of the Police and Fire Departments. The Mayor nominates to Council the appointment of certain City employees, Board and Commission members, and is chairman of the Plan Commission and the Community Development Authority. The Mayor presides at the meetings of the Common Council, voting only in cases relating to tie votes. The Mayor is elected for a 3-year term of office, with the current term expiring April 2011. City Ordinances designate eight cabinet officers, as well as other unclassified positions within City government, that are appointed by the Mayor subject to the confirmation by a majority of all members of the Common Council.[13]

Franklin is in the Southwest corner of Milwaukee County. The Milwaukee County Government consists of a Board of Supervisors and a County Executive. The Board of Supervisors is composed of 18 legislative representatives who are elected to four-year terms on a nonpartisan ballot in the spring of a presidential election year. Each supervisor represents about 50,000 people. The County Executive is elected County wide on a non partisan ballot to a four-year term. They sign laws. make sure the laws are enforced and runs the various departments of Milwaukee County including the safety and services of its residents. The City of Franklin shares parts of the 9th and 11th Milwaukee County Supervisor districts and are the only two districts that fall within the City.[14]

Franklin is represented by various state officials. All of the City of Franklin lies in the 28th State Senate District and the 82nd State Assembly District consisting of Franklin's representation in Wisconsin State Government.

The majority of Franklin students, grades kindergarten through 12th grade, attend the Franklin Public School District. The Franklin Public School District was formed in 1962 as a K - 12 common school district. Franklin has five elementary schools, one middle school and one high school. The Franklin Recreation Department is also operated by the school district. The district is governed by an annual meeting of electors and a seven member school board elected every three years with overlapping terms and election held every year in April. City government exercises no fiscal control over a school district.

The Oak Creek-Franklin School District, primarily of Franklin's eastern neighbor, Oak Creek, is a separate school district from that of the Franklin Public School District and serves residents of the far eastern side of Franklin, along 27th street. In some places it can go as far as a mile and a half mile West into the Franklin city limits. The District also serves all of the City of Oak Creek.

The Whitnall School District, which serves primarily the neighboring Village of Hales Corners and parts of the City of Greenfield, serves the City of Franklin residents residing on the city's far Northwest side.

St. Martin of Tours Parish School has been quietly and successfully educating youngsters for more than 150 years. Founded in 1858 (as Sacred Hearts of Jesus and Mary), St. Martin of Tours Parish School is an independent, self-sustaining institution that has been a continual presence in the community since the mid-19th century. It is the longest serving school in Franklin and the only Catholic school in Franklin. The school educates children of all faiths from four-year-old kindergarten through 8th grade. Communities in southern Milwaukee, eastern Waukesha, and northern Racine are represented in its enrollment. It embraces personalized learning and an instructional model centering on learners not just curriculum.

St. Paul's Lutheran Church and school was founded in 1865 by a group of German Lutherans in the township of Franklin. Through the years, St. Paul's has continued to grow building a new church building, school (serving kindergarten through 8th grade), early child enrichment center, and mission opportunities. Today St. Paul's Church is not only a historical landmark of the city of Franklin, but it also continues to serve the communities of Franklin, Oak Creek, Greenfield, Greendale and surrounding areas with the salvation promise of Jesus Christ.

The Indian Community School of Milwaukee (located in Franklin, WI) exists to foster quality academic education, cultural and physical well-being of Indian children and youth. Traditional values, culture, language, heritage and spirituality provide the foundation for this development. The Indian Community School develops lifelong community leaders who inspire others throughout the Circle of Life. With excellence and commitment, the school serves urban American Indian students and their families so that each student develops the skills and knowledge to sustain a healthy balance of American Indian culture, academic achievement, and a sense of identity through indigenous teachings and ways of learning.

According to Franklin's 2012 Comprehensive Annual Financial Report,[15] the top employers in the city are:

Franklin is home to one of the Environmental Protection Agency's Superfund sites. Referred to as the "Fadrowski Drum Disposal Site",[16] or FDDS, the 40-acre (160,000 m2) site located at Lua error in Module:Coordinates at line 668: callParserFunction: function "#coordinates" was not found. 6865 South 27th Street is one of many sites across the United States that contain, or once contained substantial amounts of contamination and hazardous wastes. The FDDS was found to be contaminated with high amounts of lead and chromium. Trace amounts of arsenic and DDT were also found.[17] The site also contains levels of mercury above Wisconsin Enforcement Standards.[18] The site once included a man-made pond with elevated cyanide levels. The exact amount of drums contained on the site, and their contents, is not known. The site was placed on the National Priorities list in 1986, with Remedial Action (RA) completed in 1994. The site was deleted from the National Priorities List in 2003.[19]

For over a decade, beginning in 1970, the Fadrowski Drum Disposal Site was operated by Edward J. Fadrowski as an unlicensed waste site thought to be accepting standard landfill debris. The site illegally accepted an unknown amount of hazardous waste during its time of operation. In 1983, Menard, Inc. purchased land that included the site with the intention of building a Menards store. During excavation for fill to level the grade for the store, several buried drums were uncovered. Some drums ruptured, spilling their unknown (at the time) contents. One drum exploded,[20] prompting a call to the Franklin Fire Department, who in turn notified the Wisconsin Department of Natural Resources. The U.S. Environmental Protection Agency ultimately oversaw the containment of the site. The site remedies include restricting access to the site, restricting use of land at the site, limited excavation of the waste (some drums), removal of hazardous soil, monitoring ground water, monitoring surface water, and installing a landfill cap.[21] 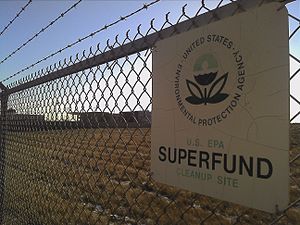 Presently, the site has been largely remediated via landfill and limited excavation, however "waste material above health-based levels will be left on site"[22] (drums, some with unknown contents, still remain buried to this day). Although Remedial Action was completed in 1994, the site is currently under a monitoring status. The U.S. Environmental Protection Agency is reviewing the site every five years, the last review was conducted in July 2008.[23] When viewed, the site appears largely as a field with a slightly higher elevation (due to the landfill cap) than the surrounding land. It is surrounded by a barbed wire fence. The site is now encircled by development. It is bordered on the north by an Ashley Furniture HomeStore, which now occupies the building of the original Menard's store when the site was discovered. The Menard's store has relocated across South 27th Street, but Menard, Inc. still owns the land. A tributary that flows into the Root River is a few hundred feet west of the site, and South 27th Street is approximately 250 feet (76 m) to the east. In 2001, the EPA relaxed deed restrictions on land intended to be a "buffer" around the site. The southern border of the site is now lined with recently built Goodwill Industries and Gander Mountain retail stores. In September 2011, a Dental Associates facility opened on the outlot sold by Menard, Inc. along the eastern border (sharing approximately 50 feet (15 m) of the eastern border) of the site. Single-family homes are just 1,000 feet (300 m) west of the site, and multi-family units are just 600 feet (180 m) to the south. A Wal-Mart is just 600 feet (180 m) north of the site. The site itself is prohibited (via Declaration of Restriction #6778720 to Menard's Inc.) from ever being used for potable water, residential development, or any development that would disturb the landfill cap. These restrictions essentially ensure no development will ever take place on the land.