Dr. med. dent. Franz Bäke[Note 1] (28 February 1898 – 12 December 1978) was a German Army officer and panzer ace. He was a recipient of the Knight's Cross of the Iron Cross with Oak Leaves and Swords. The Knight's Cross of the Iron Cross and its higher grade Oak Leaves and Swords was awarded to recognise extreme battlefield bravery or successful military leadership. Bäke fought during World War I, but rose to fame for his command of heavy panzer forces in World War II. A reservist, Bäke was a dentist in civilian life, having received his doctorate in dental medicine in 1923.

Bäke was born on 28 February 1898 in Schwarzenfels, present-day part of Sinntal, in the Province of Hesse-Nassau, Kingdom of Prussia, as part of the German Empire.[1]

In mid-1916, Bäke accepted an offer to become an officer candidate and was briefly transferred to Infanterie-Regiment Nr.10. In November 1916, Bäke was transferred to the artillery arm and served with Artillerie-Regiment zu Fuß Nr.7. After the armistice, Bäke remained in the army until his demobilisation on 25 January 1919.

From 1919 to 1921, Bäke served in the Einwohnerwehr of Würzburg as part of the Freikorps Epp, a right-wing paramilitary unit named after Franz Ritter von Epp. In parallel (1919–1922), he studied medicine and dentistry at the University of Würzburg, University of Bonn and University of Münster and attained his Doctor of Medical Dentistry in 1923.[2]

Bäke established his own dentistry practice in Hagen. In early 1937 he applied to join the reserves, being accepted on 1 April 1937. Bäke was given his World War I rank of officer cadet and posted to Aufklärungs-Abteilung 6, a reconnaissance unit.[Note 3] After two major exercises, Bäke returned to his dentistry practice, spending the required time in reserve training to achieve the rank of Leutnant (2nd lieutenant) of the Reserves by December 1937. Soon after, he was mobilized for full-time service as an officer.

On 1 January 1938, Bäke was transferred to Panzer-Abteilung 65, where he served as platoon leader of the Abt's light column. During the invasion of the Sudetenland, he acted as the deputy company commander of 3./Panzer-Abteilung 65.

With the outbreak of war on 1 September 1939, Bäke was still with Panzer-Abteilung 65. During the Invasion of Poland, he acted as the leader of the light column during the initial operations, before transferring to a platoon command in the Abteilung's second company. Equipped with Czech-made Panzerkampfwagen 35(t) tanks, the Abteilung was attached to General der Panzertruppen Werner Kempf's 1. leichte-Division on 12 September, and completed the campaign serving under Kempf's formation, Panzer-Division Kempf. On 1 November 1939 he was promoted to Oberleutnant of the Reserves (1st lieutenant) and appointed company commander. In October 1939, 1. Leichte-Division was redesignated 6. Panzer-Division. Panzer-Abt 65 formed an integral part of this new division. On 1 May 1940, Bäke was promoted to Hauptmann of the Reserves (captain).

On 10 May 1940, Bäke and 6.Panzer took part in Fall Gelb, the invasion of France. 6.Panzer formed a part of Panzergruppe Guderian, an army-sized formation charged with attacking through the Ardennes and encircling the Allied forces engaged in combat in Belgium. In the following weeks in combat, he was wounded twice (on 17 and 19 May), receiving the Wound Badge in gold. Bäke was awarded the Iron Cross first class following the campaign.

Following the campaign in the West, 6.Panzer was moved to East Prussia, where it undertook refitting in preparation for the coming offensive against the Soviet Union. Bäke was appointed to the staff of 6. Panzer's Panzer-Regiment 11, being responsible for the recovery of damaged tanks. With the launch of Operation Barbarossa on 22 June 1941, 6.Panzer took part in Army Group North's strike towards Leningrad. On 1 August 1941, Bäke was promoted to Major of the Reserves.

In October 1941, 6.Panzer was transferred to Army Group Centre, where it formed a part of Panzergruppe 3, commanded by General Georg-Hans Reinhardt. The Panzergruppe was tasked with Operation Typhoon, an offensive aimed at the capture of Moscow. On 27 November, elements of the Panzergruppe reached the Volga Canal, only 19 miles (31 km) from Moscow. The offensive ultimately failed.

In November 1941, Bäke was appointed to the position of Ordonnanz-Offizier for Panzer-Regiment 11. This position required Bäke to lead ad hoc Kampfgruppen. 6.Panzer ended the campaign as part of General Erich Höpner's Panzergruppe 4, acting as a reserve for Army Group Centre forces.

Refit – back to the Eastern Front

After the defensive battles near Moscow during the winter, the depleted 6.Panzer was ordered back to France to rest and refit. On 1 June 1942, Bäke was promoted to commander of II./Abteilung of Panzer-Regiment 11.

After the encirclement of the German Sixth Army at Stalingrad, 6.Panzer, was sent to Ukraine to join Erich von Manstein's Army Group Don, currently struggling to halt the advancing Soviet forces. The division arrived at the front in December 1942 and took part in the abortive attempt to relieve the 6th Army in Operation Wintergewitter. Bäke commanded II./Panzer-Regiment 11 during the withdrawal to Kharkov. On 11 January 1943, Bäke was awarded the Knight's Cross of the Iron Cross.

The division took part in the battle to retake Kharkov. After the recapture of the city, 6.Panzer was attached to Armee-Abteilung Kempf. During May, the division was pulled back to act as reserve. 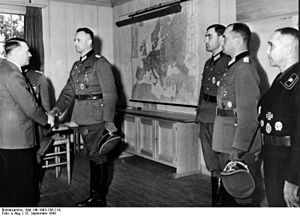 In June, 6.Panzer was attached to 4.Panzer-Armee under General Colonel Hermann Hoth. 4.Panzer-Armee was to form the southern pincer of the attack on the Kursk salient, Operation Citadel. Bäke's unit fought near Belgorod. On 13 July 1943, Bäke was wounded, but remained with the unit. On 14 July, the commander of Panzer-Regiment 11 was severely wounded, and command of the regiment was temporarily delegated to Bäke. The offensive was cancelled on 13 August 1943, and Bäke's regiment saw heavy combat during the withdrawal to the Dniepr. For his actions during Operation Citadel, Bäke was awarded the Oak Leaves to the Knight's Cross.

On 1 November 1943, Bäke was promoted to Oberstleutnant of the Reserves (lieutenant colonel) and his command of the regiment was made official. In December 1943, he was ordered to begin formation of an ad hoc reinforced tank regiment named Heavy Panzer Regiment Bäke [Schweres-Panzer-Regiment Bäke]. The regiment consisted of 46 Panther and 34 Tiger I tanks, supported by self-propelled artillery and a mechanized engineer battalion. In January 1944, Bäke commanded his regiment during the battles for the Balabonovka pocket. Bäke single-handedly destroyed three Soviet tanks during the battle with infantry weapons at close range, for which he received three Tank Destruction Badges, worn on his upper right sleeve.[3]

Next, the regiment was sent to the area of Korsun-Cherkassy, where Gruppe Stemmermann, named after its commander Wilhelm Stemmermann, had been encircled in the Cherkassy Pocket. Together with a Kampfgruppe of the 1.SS-Panzer-Division Leibstandarte SS Adolf Hitler, Bäke's tanks opened an escape route for the trapped Germans and held it open while many escaped.

For his actions during these battles, Bäke received the Swords to the Knight's Cross on 14 February 1944, becoming the 49th Wehrmacht soldier to receive this commendation. In March, the regiment was trapped in the Kamenets-Podolsky pocket along with the entire 1.Panzer-Armee. Bäke's regiment formed one of the spearheads moving west to break the encirclement, and effected a link up with II.SS-Panzerkorps, creating an escape route for the army.

On 1 May 1944, Bäke was promoted to Oberst of the Reserves.[4] His regiment was involved in defensive battles for the rest of the month, after which it was disbanded and the component units sent back to their parent divisions. Bäke was ordered west to take command of 106.Panzer-Brigade Feldherrnhalle, which was forming in Mława.[5] The Feldherrnhalle units were formed from a cadre of ex-SA men, and as such Bäke was granted the honorary SA rank of SA-Sanitäts-Standartenführer.

Bäke's unit attacked the U.S. 90th Infantry Division near Aumetz on the night of 7–8 September 1944.[6] Bäke's command found itself poorly deployed and under sustained counter-attack from American infantry. By the evening of 8 September, Bäke had lost thirty tanks, sixty half-tracks, and nearly a hundred other vehicles in the lopsided battle.[7] His infantry losses were also heavy, with the unit reporting to OB West that it had only nine armored vehicles and that unit strength was down to 25 per cent of the authorized establishment.[7]

On 28 February 1945, Bäke transferred from reserve to active duty.[4] On 10 March he was tasked with the leadership of the newly formed Panzer-Division Feldherrnhalle 2, formally the 13th Panzer Division, and sent to Hungary. Bäke's division fought as part of the Panzerkorps Feldherrnhalle during the retreat through Hungary and Czechoslovakia. On 20 April, Bäke was promoted to Generalmajor and officially given command of the 13th Panzer Division/Panzer-Division Feldherrnhalle 2. He on 8 May 1945 surrendered to American forces.[8]

Bäke spent several years as a prisoner of war, being released in 1947. He returned to Hagen and resumed his dental practice.

He died in a hospital at Bergmannsheil in Bochum of injuries sustained in a car accident on 12 December 1978.[1] The Bundeswehr provided an honour guard at his funeral.