Crystal structure of a rotaxane with a cyclobis(paraquat-p-phenylene) macrocycle reported by Stoddart and coworkers in the Eur. J. Org. Chem. 1998, 2565–2571. 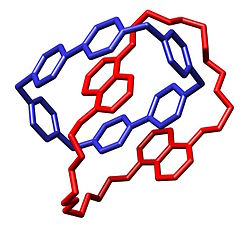 Crystal structure of a catenane with a cyclobis(paraquat-p-phenylene) macrocycle reported by Stoddart and coworkers in the Chem. Commun., 1991, 634–639. 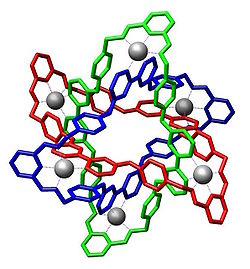 Sir James Fraser Stoddart FRS FRSE FRSC (born 24 May 1942)[1] is a Scottish chemist currently (as of 22 March 2014[update]) at the Department of Chemistry at Northwestern University in the United States.[2] He works in the area of supramolecular chemistry and nanotechnology. Stoddart has developed highly efficient syntheses of mechanically-interlocked molecular architectures such as molecular Borromean rings, catenanes and rotaxanes utilizing molecular recognition and molecular self-assembly processes. He has demonstrated that these topologies can be employed as molecular switches and as motor-molecules.[3] His group has even applied these structures in the fabrication of nanoelectronic devices and nanoelectromechanical systems (NEMS).[4] His efforts have been recognized by numerous awards including the 2007 King Faisal International Prize in Science.[5]

Fraser Stoddart was born in Edinburgh, Scotland, was brought up on a farm and received early schooling at a local village school in Carrington, Midlothian before going on to Melville College in Edinburgh.[6] He obtained his B.Sc. (1964) and Ph.D. (1966) degrees from Edinburgh University. In 1967, he went to Queen’s University (Canada) as a National Research Council Postdoctoral Fellow, and then, in 1970, to Sheffield University as an Imperial Chemical Industries (ICI) Research Fellow, before joining the academic staff as a Lecturer in Chemistry. He was a Science Research Council Senior Visiting Fellow at the University of California, Los Angeles (UCLA) in 1978. After spending a sabbatical (1978–81) at the ICI Corporate Laboratory in Runcorn, he returned to Sheffield where he was promoted to a Readership in 1982.

He was awarded a DSc degree by Edinburgh in 1980 for his research into stereochemistry beyond the molecule and elected a Fellow of the Royal Society in 1994. In 1990, he moved to the Chair of Organic Chemistry at Birmingham University and was Head of the School of Chemistry there (1993–97) before moving to UCLA as the Saul Winstein Professor of Chemistry in 1997.

In July 2002, he became the Acting Co-Director of the California NanoSystems Institute (CNSI). In May 2003, he became the Fred Kavli Chair of NanoSystems Sciences and served from then through August 2007 as the Director of the CNSI. He was appointed a Knight Bachelor in the New Year's Honours December 2006, by Queen Elizabeth II.[7] In 2007, he received the Albert Einstein World Award of Science in recognition for his outstanding and pioneering work in molecular recognition and self-assembly, and the introduction of quick and efficient template-directed synthetic routes to mechanically interlocked molecular compounds, which have changed the way chemists think about molecular switches and machines.[8]

Stoddart has pioneered the use of mechanically-interlocked molecular architectures to create nanomechanical systems. He has demonstrated that such devices can be fabricated using a combination of the bottom-up approach of molecular self-assembly and a top-down approach of lithography and microfabrication.

Stoddart's papers and other material are instantly recognizable due to a distinctive "cartoon"-style of representation he has developed since the late 1980s. A solid circle is often placed in the middle of the aromatic rings of the molecular structures he has reported, and different colors to highlight different parts of the molecules. Indeed, he was one of the first researchers to make extensive use of color in chemistry publications. The different colors usually correspond to the different parts of a cartoon representation of the molecule, but are also used to represent specific molecular properties (blue, for example, is used to represent electron-poor recognition units while red is used to represent the corresponding electron-rich recognition units). Stoddart maintains this standardized color scheme across all of his publications and presentations, and his style has been adopted by other researchers reporting mechanically interlocked molecules based on his syntheses.

He has more than 1000 publications and an h-index of 114. For the period from January 1997 to August 31, 2007, he was ranked by the Institute for Scientific Information as the third most cited chemist with a total of 14,038 citations from 304 papers at a frequency of 46.2 citations per paper. During 35 years, over 260 PhD students and postdoctoral researchers have been trained in his laboratories, and more than 60 have subsequently embarked upon independent academic careers. The Institute for Scientific Information (ISI) also predicted that Fraser Stoddart was a likely winner of the 2005 Nobel Prize in Chemistry along with George M. Whitesides and Seiji Shinkai for their contributions to molecular self-assembly. However, the Prize eventually went to Robert Grubbs, Richard Schrock and Yves Chauvin.