From Infogalactic: the planetary knowledge core
Jump to: navigation, search
This article is about organised brotherhoods. For fraternities organised as orders, see Fraternal order.
For other uses, see Fraternity (disambiguation).

A fraternity (from Latin frater: "brother"; "brotherhood"), fraternal order or fraternal organisation is an order, organisation, society or a club of men associated together for various religious or secular aims.[1][2][3][4] Fraternity in the Western concept developed in the Christian context, notably with the religious orders in the Catholic Church during the middle ages.[5][6][6] A notion eventually further extended with the middle age guilds, followed by the early modern formation of gentlemen's clubs, freemasons, odd fellows, student fraternities and fraternal service organisations.[7][8][9] Members are occasionally referred to as a brother or - usually in religious context - Frater or Friar.[10][11]

Today, connotions of fraternities vary according to the context, including companionships and brotherhoods dedicated to the religious, intellectual, academic, physical and/or social pursuits of its members. Additionally, in modern times, it sometimes connotes a secret society, especially regarding freemasonry, odd fellows and various academic and student societies.[12][13]

Although membership in fraternities were and mostly still is limited to men, ever since the Catholic sisters and nuns of the middle ages and henceforth, this is not always the case. There are mixed male and female fraternities and fraternal orders, as well as wholly female religious orders and societies, or sororities.[14][15] Notable modern fraternities or fraternal orders that with time have evolved to more or less permit female members, include some grand lodges operating among freemasons and odd fellows.[16][17]

There are known fraternal organizations which existed as far back as ancient Greece and in the Mithraic Mysteries of ancient Rome. Analogous institutions developed in the late medieval period called confraternities, which were lay organizations allied to the Catholic Church. Some were groups of men and women who were endeavoring to ally themselves more closely with the prayer and activity of the Church; others were groups of tradesmen, which are more commonly referred to as guilds. These later confraternities evolved into purely secular fraternal societies, while the ones with religious goals continue to be the format of the modern Third Orders affiliated with the mendicant orders.

The development of modern fraternal orders was especially dynamic in the United States, where the freedom to associate outside governmental regulation is expressly sanctioned in law.[18] There have been hundreds of fraternal organizations in the United States, and at the beginning of the 20th century the number of memberships equaled the number of adult males. (Due to multiple memberships, probably only 50% of adult males belonged to any organizations.)[19] This led to the period being referred to as "the Golden age of fraternalism."

In 1944 Arthur M. Schlesinger coined the phrase "a nation of joiners" to refer to the phenomenon.[20] Alexis de Tocqueville also referred to the American reliance on private organization in the 1830s in Democracy in America.

There are many attributes that fraternities may or may not have, depending on their structure and purpose. Fraternities can have differing degrees of secrecy, some form of initiation or ceremony marking admission, formal codes of behavior, disciplinary procedures, very differing amounts of real property and assets.[19] 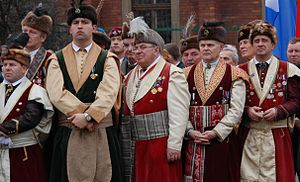 The only true distinction between a fraternity and any other form of social organization is the implication that the members freely associate as equals for a mutually beneficial purpose rather than because of a religious, governmental, commercial, or familial bond, although there are fraternities dedicated to each of these fields.[19] On college campuses, fraternities may be divided into groups: social, service, professional, and honorary.

Fraternities can be organized for many purposes, including university education, work skills, ethics, ethnicity, religion, politics, charity, chivalry, other standards of personal conduct, asceticism, service, performing arts, family command of territory, and even crime. There is almost always an explicit goal of mutual support, and while there have been fraternal orders for the well-off there have also been many fraternities for those in the lower ranks of society, especially for national or religious minorities. Trade unions also grew out of fraternities such as the Knights of Labor.

The ability to organize freely, apart from the institutions of government and religion, was a fundamental part of the establishment of the modern world. In Living the Enlightenment, Margaret C. Jacobs showed that the development of Jurgen Habermas's "public space" in 17th-century Netherlands was closely related to the establishment of lodges of Freemasons.[21]

The development of fraternities in England can be traced from guilds that emerged as the forerunners of trade unions and friendly societies. These guilds were set up to protect and care for their members at a time when there was no welfare state, trade unions or universal health care. Various secret signs and handshakes were created to serve as proof of their membership allowing them to visit guilds in distant places that are associated with the guild they belong.

Over the next 300 years or so, the idea of "ordinary" people joining together to improve their situation met with varying degrees of opposition (and persecution) from "People in Power", depending on whether they[clarification needed] were seen as a source of revenue (taxes) or a threat to their power. When Henry VIII broke from the Roman Catholic Church, he viewed the guilds as supporters of the Pope, and in 1545 expropriated their property. Later, Elizabeth I appropriated apprenticeships away from guilds,[clarification needed] and by the end of her reign most guilds had been suppressed.

The suppression of these trade guilds removed an important form of social and financial support from ordinary men and women. In London and other major cities, some Guilds (like the Freemasons and the Odd Fellows) survived by adapting their roles to a social support function. Eventually, these groups evolved in the early 18th century into more philosophical organizations focused on brotherly love and ethical living. Among guilds that became prosperous are the Freemasons, Odd Fellows and Foresters.

By joining a fraternity, networking becomes a key factor to pushing a member towards success. With alumni members; who have previously been active but graduated at an earlier time, connections offered by them are endless. Depending on the individuals interest and common goals; Networking is a big part of the different types of Fraternities (ex: Social, Business, Religious, etc.).

Main articles: Fraternities and sororities in North America and Studentenverbindung 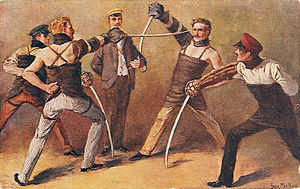 The German Student Corps are known for practicing their tradition of engaging in academic fencing by rules dating back to the 1750s.

Fraternities have a history in American colleges and universities and form a major subsection of the whole range of fraternities.[22] In Europe, students were organized in nations and corporations since the beginnings of the modern university in the late medieval period, but the situation can differ greatly by country.

In the United States, fraternities in colleges date to the 1770s but did not fully assume an established pattern until the 1820s. Many were strongly influenced by the patterns set by Freemasonry.[19] The main difference between the older European organizations and the American organizations is that the American student societies virtually always include initiations, the formal use of symbolism, and a lodge-based organizational structure (chapters).

The oldest active social American college fraternity is the Kappa Alpha Society founded in 1825 at Union College, followed closely by Sigma Phi Society (1827) and Delta Phi Fraternity (1827) at the same school. Other fraternities are also called literary societies because they focus on the literary aspect of the organization and its role in improving public speaking.

In Germany the German Student Corps are the oldest academic fraternities. Twenty-eight were founded in the 18th century and two of them still exist.[23] Most of their traditions have not changed much for the past two centuries. These traditions include academic fencing duels with sharp blades while wearing only eye and neck protection, or regular hunting events, as can be seen in examples such as Corps Hubertia Freiburg, Corps Palatia Munich, Corps Rhenania Heidelberg, or Corps Altsachsen Dresden.

At Swedish universities, especially those of Uppsala and Lund, students have organized in nations since the 16th century. These organisations are open to all students who wish to join. Parallel to the nations both Uppsala and Lund play host to a large number of university related secret societies, for both students and older academics.

In September 2014, Wesleyan University in Connecticut ordered all fraternities with on-campus housing to become co-educational within the next three years.[24]