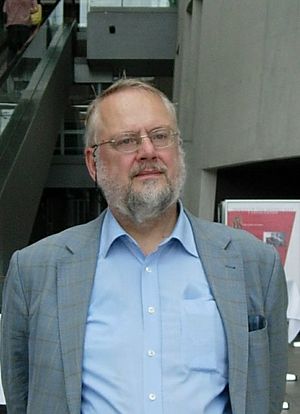 Frederik Herman Henri (Frits) Kortlandt (born June 19, 1946, Utrecht) is a professor of descriptive and comparative linguistics at Leiden University in the Netherlands. He writes on Baltic and Slavic languages, the Indo-European languages in general, and Proto-Indo-European, though he has also published studies of languages in other language families. He has also studied ways to associate language families into super-groups such as Indo-Uralic.

Kortlandt, along with George van Driem and a few other colleagues, is one of the proponents of the Leiden School of linguistics, which describes language in terms of a meme or benign parasite.

Kortlandt holds five degrees from the University of Amsterdam:

Kortlandt has been a member of the Royal Dutch Academy of Sciences since 1986[1] and is a Spinozapremie laureate. In 2007, he composed a version of Schleicher's fable, a story written in a hypothetical, reconstructed Proto-Indo-European, which differs radically from all previous versions.