The Free German Youth, also known as the FDJ (German: Freie Deutsche Jugend), is a socialist youth movement in Germany. Formerly it was the official youth movement of the German Democratic Republic (GDR) and the Socialist Unity Party of Germany.[1]

The organization was meant for young people, both male and female, between the ages of 14 and 25 and comprised about 75% of the young population of former East Germany.[2] In 1981-1982, this meant 2.3 million members.[3] After being a member of the Thälmann Pioneers, which was for schoolchildren ages 6 to 14, East German youths would usually join the FDJ.[4]

The FDJ was intended to be the "reliable assistant and fighting reserve of the Worker's Party", or Socialist Unity Party of Germany, was a member of the National Front and had representatives in the People's Chamber.[5] The political and ideological goal of the FDJ was to influence every aspect of life of young people in the GDR, distribution of Marxism–Leninism and the promotion of communist behavior.[6] Membership in the FDJ was nominally voluntary. However, those who did not join lost access to organized holidays, and found it difficult (if not impossible) to be admitted to universities, pursue chosen careers etc. The majority of youths who refused to join did so for religious reasons.[5]

While the movement was intended to promote Marxist–Leninist ideology among East Germany's young people, it did not concentrate on this to the exclusion of other activities. It arranged thousands of holidays for young people through its Jugendtourist agency, and ran discos and open-air rock concerts.[5] The Festival of Political Songs was an officially sponsored event from 1970 to 1990. 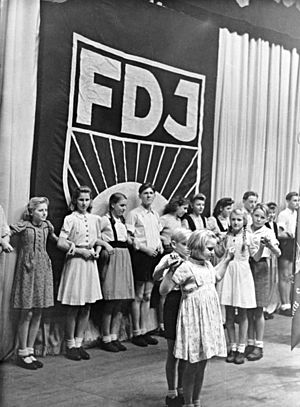 Foundation of the FDJ in Berlin, November 1947 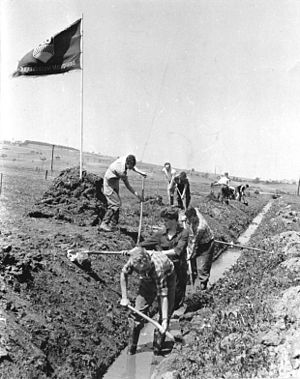 FDJ members digging ditches in May 1959

The FDJ was founded in January 1936 through the merger of the Young Communist League of Germany, Socialist Youth League of Germany and the Socialist Workers Youth[7] as an underground anti-fascist movement to oppose Hitler and the Nazi Party's rule. However, the Gestapo of the Third Reich effectively prevented pro-communist groups such as the FDJ from operating within the country and the group was subsequently pushed out of Nazi Germany. During the same year, the organization moved its headquarters to Paris, to Prague in 1938 and later to London.[5] In the United Kingdom the organization eventually succeeded in building a stable network of groups that also extended to Scotland and other regions and operated there until 1946.[8]

After the defeat of Hitler and the Nazi Party, the FDJ headquarters moved to the Soviet occupation zone of Germany. The organization once again became active in German politics in 1946.[6]

When Germany was partitioned into the eastern German Democratic Republic and the western Federal Republic of Germany, supported by the Soviet Union and the United States respectively, the FDJ assumed a role in the GDR which resembled that of the Soviet Komsomol. It was recognized as part of the World Federation of Democratic Youth at its annual meeting in Otwock, Poland, on August 21, 1948.[5]

The West German government treated the FDJ with suspicion because of its pro-communist orientation and of its links to East Germany. In 1951 the government of Konrad Adenauer banned the FDJ.[5] After a protracted legal battle, the ban came into effect in 1954 when the FDJ's appeal was rejected by the West Germany's constitutional court.

In 1952, Phillip Müller, a member of the FDJ, was shot by the North Rhine-Westphalia Police during a demonstration in Essen against West German re-armament. Afterwards, large numbers of the FDJ's membership were imprisoned.[9]

The FDJ's official newspaper, Junge Welt, at one time was the largest-circulation paper in East Germany. It continues publication as of 2015[update] on a smaller scale without FDJ affiliation.[10]

Members of the FDJ took part in the gala celebrations of East Germany's 40th anniversary on 7 October 1989. However, at a torchlight parade to cap off the festivities, many began chanting, "Gorby, help us! Gorby, save us!" within earshot of all the Communist dignitaries gathered to watch. This came as a rude shock to the SED establishment, since the FDJ was supposed to be the party's future.[11]

Between 1989 and the reunification of Germany in 1990, the organization lost much of its membership. As of 2011[update] it shares the Karl-Liebknecht-Haus in Berlin with the Left Party and with other organizations, but is in no way affiliated with the party or any other major political group. Only in West Germany the FDJ works together with the Workers' League for the Restoration of the Communist Party of Germany. Legally, the statutes declaring the FDJ an illegal organization remain in effect, although the organization operates openly: it claims to have legal status, based on an agreement in 1990 between the two states prior to reunification.[12]

In 2007, the organization was reported to be canvassing for new members [discuss]. The German domestic intelligence agency - the Federal Office for the Protection of the Constitution - which tracks extremist behavior, holds the FDJ's activities and movements under observation.[13]