From Infogalactic: the planetary knowledge core
Jump to: navigation, search
Not to be confused with Freethought, Cognitive liberty, or Freedom of speech. 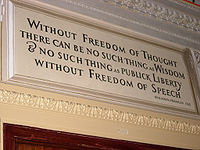 Freedom of thought (also called the freedom of conscience[disputed – discuss] or ideas) is the freedom of an individual to hold or consider a fact, viewpoint, or thought, independent of others' viewpoints. It is different from and not to be confused with the concept of freedom of speech or expression.

Freedom of thought is the precursor and progenitor of—and thus is closely linked to—other liberties, including freedom of religion, freedom of speech, and freedom of expression. Though freedom of thought is axiomatic for many other freedoms they are in no way required for it to operate and exist. Conception of a freedom or a right does not guarantee its inclusion, legality, or protection via a philosophical caveat. It is a very important concept in the western world and nearly all[citation needed] democratic constitutions protect these freedoms. For instance, the Bill of Rights contains the famous guarantee in the First Amendment that laws may not be made that interfere with religion "or prohibiting the free exercise thereof". U.S. Supreme Court Justice Benjamin Cardozo reasoned in Palko v. Connecticut (1937):

Freedom of thought... is the matrix, the indispensable condition, of nearly every other form of freedom. With rare aberrations a pervasive recognition of this truth can be traced in our history, political and legal.[1]

Such ideas are also a vital part of international human rights law. In the Universal Declaration of Human Rights (UDHR), which is legally binding on member states of the International Covenant on Civil and Political Rights (ICCPR), freedom of thought is listed under Article 18:

Everyone has the right to freedom of thought, conscience and religion; this right includes freedom to change his religion or belief, and freedom, either alone or in community with others and in public or private, to manifest his religion or belief in teaching, practice, worship and observance.

History of development and suppression

It is impossible to know with certainty what another person is thinking, making suppression difficult. The concept is developed throughout the Bible, most fully in the writings of Paul of Tarsus (e.g., "For why should my freedom [eleutheria] be judged by another's conscience [suneideseos]?" 1 Corinthians 10:29.).[3] 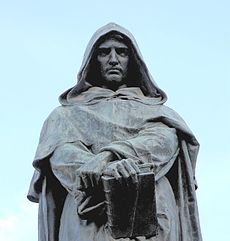 Although Greek philosophers Plato and Socrates had discussed Freedom of Thought minimally, the edicts of King Ashoka (3rd century BC) have been called the first decree respecting Freedom of Conscience.[4] In European tradition, aside from the decree of religious toleration by Constantine I at Milan in 313, the philosophers Themistius, Michel de Montaigne, Baruch Spinoza, Locke, Voltaire, Alexandre Vinet, and John Stuart Mill have been considered major proponents of the idea of Freedom of Conscience.[5]

Queen Elizabeth I revoked a thought censorship law in the late sixteenth century, because, according to Sir Francis Bacon, she did "not [like] to make windows into men's souls and secret thoughts".[6] During her reign, philosopher, mathematician, astrologer, and astronomer Giordano Bruno took refuge in England from the Italian Inquisition, where he published a number of his books regarding an infinite universe and other topics banned by the Catholic Church. After leaving the safety of England, Bruno was eventually burned as a heretic in Rome for refusing to recant his ideas. For this reason he is considered by some to be a martyr for free thought.[7]

However, freedom of expression can be limited through censorship, arrests, book burning, or propaganda, and this tends to discourage freedom of thought. Examples of effective campaigns against freedom of expression are the Soviet suppression of genetics research in favor of a theory known as Lysenkoism, the book-burning campaigns of Nazi Germany, the radical anti-intellectualism enforced in Cambodia under Pol Pot, the strict limits on freedom of expression imposed by the Communist governments of the Peoples Republic of China and Cuba or by right-wing authoritarian dictatorships such as those of Augusto Pinochet in Chile and Francisco Franco in Spain.

Freedom of expression can also be stifled without institutional interference when majority views become so widely accepted that the entire culture represses dissenting views. For this reason, some condemn political correctness as a form of limiting freedom of thought. Although political correctness aims to give minority views equal representation, the majority view itself can be politically correct; for example, college student Max Karson was arrested following the Virginia Tech shootings for politically incorrect comments that authorities saw as "sympathetic to the killer". Karson's arrest raised important questions regarding freedom of thought and whether or not it applies in times of tragedy.

The Sapir–Whorf hypothesis, which states that thought is inherently embedded in language, would support the claim that an effort to limit the use of words of language is actually a form of restricting freedom of thought.[citation needed] This was explored in George Orwell's novel 1984, with the idea of Newspeak, a stripped-down form of the English language lacking the capacity for metaphor and limiting expression of original ideas.