Friedrich August Jeckeln[Note 1] (2 February 1895, Hornberg, Baden  – 3 February 1946) was an SS-Obergruppenführer who served as an SS and Police Leader in the occupied Soviet Union during World War II. Jeckeln was the commanding SS General over one of the largest collection of Einsatzgruppen and was personally responsible for ordering and organizing the deaths of over 100,000 Jews, Slavs, Romani, and other "undesirables" of Nazi Germany. After the end of World War II, Jeckeln was convicted as a war criminal and executed in 1946.

Jeckeln was born in Hornberg, Baden. Upon the outbreak of World War I, Jeckeln was commissioned a Leutnant, serving from 1914 to 1918 first as an artillery officer and then as a pilot trainee. During his World War I service, Jeckeln was awarded the Wound Badge and the Iron Cross 2nd Class.

The Nazi Party and SS

After being discharged following Germany's defeat, Jeckeln worked as an engineer before joining the Nazi Party on October 1, 1929. In December 1930, Jeckeln applied to join the Schutzstaffel (SS) and was accepted as a member the following month. Jeckeln was promoted to the rank of SS-Sturmbannführer (major) in March 1931 and put in charge of the 1st Sturmbann (Battalion) of the 12th SS-Standarte (Regiment) in the Allgemeine-SS. By the end of 1931, he was promoted to Standartenführer (colonel) and placed in charge of the 17th SS-Standarte. 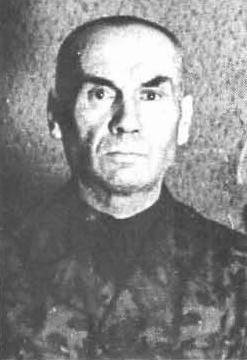 By July 1932, Jeckeln was serving as an SS-Abschnitt (Brigade) commander and had been promoted to the rank of SS-Oberführer. He was also elected as a member of the Reichstag that same year. In January 1933, when the Nazis came to national power in Germany, Jeckeln was put in charge of SS Group South. The next month, he was promoted to SS-Gruppenführer (major general). Jeckeln spent the next three years as an SS Group Commander and Political Police Commissioner before being promoted to SS-Obergruppenführer (Lt general) in 1936. He was then made the SS and Police Leader of Western Germany and also served as commander of SS-Oberabschnitt (Division) West.

Jeckeln was known to be ruthless, brutal, self-indulgent and hard. Political opponents, especially members of the KPD, SPD and the unions, he pursued relentlessly until their death. Together with party member Friedrich Alpers, Jeckeln was primarily responsible for the Rieseberg murders in the summer of 1933. In addition, he ordered the murder of a renegade SS man in Brunswick.

After the Second World War began, Jeckeln was called up to active duty in the Waffen-SS. As was the practice in the SS, Jeckeln took a lower rank from his Allgemeine-SS position and served as an officer in Regiment 2 of the Totenkopf Division. In 1941, however, his front line service was terminated and he was transferred by Reichsführer-SS Heinrich Himmler to serve as Higher SS and Police Leader (HSSPF) of Eastern Russia. In this role Jeckeln assumed direction and control of all SS-Einsatzgruppen mass executions and anti-partisan operations in his district.

Jeckeln developed his own methods to kill large numbers of people, which became known as the "Jeckeln System". Jeckeln had staff which specialised in each separate part of the process. As applied in the Rumbula massacre on 30 November and 8 December 1941, Jeckeln's system worked as follows:

This system was called "sardine packing" (Sardinenpackung). It was reported that even some of the experienced Einsatzgruppen killers were horrified by its cruelty. At Rumbula, Jeckeln watched on both days of the massacre as 25,000 people were killed before him. Jeckeln proved to be an effective killer who cared nothing about murdering huge numbers of unarmed and even naked men, women, children and the elderly.[1] One of the three survivors of the Rumbala massacre, Frida Michelson, escaped by pretending to be dead as the victims heaped shoes (later salvaged by Jeckeln's men) upon her:

A mountain of footwear was pressing down on me. My body was numb from cold and immobility. However, I was fully conscious now. The snow under me had melted from the heat of my body. ... Quiet for a while. Then from the direction of the trench a child's cry: 'Mama! Mama! Mamaa!'. A few shots. Quiet. Killed.[2]

On 27 January 1942, Jeckeln was awarded the "War Merit Cross (Kriegsverdienstkreuz or KVK) with Swords" for killing 25,000 at Rumbula.[Note 2] In February 1945, now a General der Waffen-SS und Polizei, Jeckeln was appointed to command the SS-Freiwilligen-Gebirgs-Korps and also served as Commander of Replacement Troops and Higher SS and Police Leader in Southwest Germany. 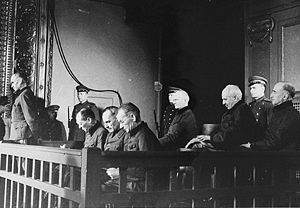 Friedrich Jeckeln (on left, standing), at his trial for war crimes in Riga, c. 1946

Jeckeln was captured by Soviet troops near Halbe, in the vicinity of Forsthaus Hammer, on 28 April 1945. Along with other Nazis who served in the Riga military district, he was tried before a Soviet military court in Riga, Latvia from 26 January 1946, to 3 February 1946. During the investigation, he was calm, answering questions from investigators in essence, on the dock looked dull and impartial. Jeckeln in his last words was restrained, he fully admitted his guilt and agreed to bear full responsibility for the activities of subordinate Police, SS and SD in Ostland. Concluding his speech, he said: "I have to take full responsibility for what happened in the borders of Ostland, within SS, SD and the Gestapo. Thereby increases much my fault. My fate is in the hands of the High Court, and so I ask only to pay attention to mitigating circumstances. I will accept a sentence in full repentance and I will consider as worthy punishment." Jeckeln and the other defendants were found guilty, sentenced to death and hanged at Riga on 3 February 1946 in front of some 4,000 spectators. Against popular misconception, the execution did not happen in the territory of the former Riga ghetto, but in Victory Square (Uzvaras laukums).