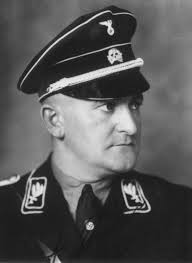 He became a member of Nazi Party in 1925 and of SS in 1926. In 1930 he was promoted to leader of SS in Rheinland and Ruhr. He became Polizeipräsident in Düsseldorf in 1933, and Höherer SS- und Polizeiführer West in 1938. During 1939 Weitzel wrote the book Celebrations of the SS Family which described the holidays to be celebrated along with how married SS men and their families should celebrate them. This book written by Weitzel described how the Julleuchter should be used, which was a Yuletide gift by Himmler to the SS.[1] Following the German invasion of Norway on 9 April 1940, Weitzel was brought to Norway on 21 April to become Höherer SS- und Polizeiführer in the country's capital, Oslo. He would not last in this position for long, however, as he was killed by shrapnel in an aerial attack on his home town Düsseldorf during a visit on 19 June 1940. [2] He is buried in the cemetery at Düsseldorf.

Like Richard Walther Darré, Weitzel was one of the key figures concerning the cultural aspects of the SS. His book Die Gestaltung der Feste helped Himmler with what he called the “arteigene Kultur”, which was the recreated German pagan religion.[3]