Fritz Witt (27 May 1908 – 14 June 1944) was a German high-ranking member in the Waffen-SS, the armed paramilitary branch of the Nazi Party's Schutzstaffel (SS). He served with the Leibstandarte SS Adolf Hitler Division before taking command of the 12th SS Division Hitlerjugend. Witt obtained the rank of Brigadeführer und Generalmajor der Waffen-SS. He was killed in action in June 1944.

Witt was born on 27 May 1908 in Hohenlimburg, at the time in the Province of Westphalia of the Kingdom of Prussia. He was the son of a merchant who died in March 1920. Following his graduation from a Volksschule, Witt completed a vocational education as a merchant and worked in the textile industry until he lost his job in June 1931.[1]

On 1 December 1931, Witt joined the Nazi Party (NSDAP) (Nr. 816,769) and the Schutzstaffel (SS) (Nr. 21,518).[2] In March 1933, Witt became a member of the SS-Stabswache "Berlin", a unit renamed to SS-Sonderkommando "Berlin" in September. That year, in October, Witt was promoted to SS-Sturmführer, and appointed Zugführer (platoon leader) of the 2. Sturm (2nd Company).[1] SS-Sonderkommando "Berlin" was the nucleus of the later named "Leibstandarte SS Adolf Hitler" (LSSAH).[3] In January 1935, Witt, holding the rank of SS-Obersturmführer, was transferred to I. Bataillon (1st Battalion) of the SS-Standarte "Deutschland", a unit later part of the 2nd SS Panzer Division "Das Reich", based in Munich to support its creation. There, Witt was tasked with the command of 3. Kompanie (3rd Company) and was promoted to SS-Hauptsturmführer on 1 June 1935.[1]

Battle of France and Greece

Following the Invasion of Poland, the SS-Infanterie-Regiment "Deutschland" was one of three regiments of the SS-Verfügungstruppe (SS-VT) and later became the 2nd SS Panzer Division "Das Reich". On 19 October 1939, Witt was tasked with leading I. Bataillon (1st Battalion) of the SS-Standarte "Deutschland". In this command position Witt participated in the Battle of the Netherlands and Battle of France. During the Battle of Zeeland, on 16 May 1940, Witt and his unit crossed the canal through Zuid-Beveland near Vlake, continued to Kapelle and captured Goes. The next day, Witt was promoted to SS-Sturmbannführer. On 27 May 1940, the SS-Standarte "Deutschland" was tasked with securing the right flank of 3rd Panzer-Division in its advance from Merville to Bailleul in French Flanders. That day, Witt's battalion came under attack from roughly 20 British Expeditionary Force tanks, supported by its infantry. In this engagement, Witt's battalion claimed the destruction of nine tanks.[5]

From 27–31 May, Witt's battalion fought at Hazebrouck, Cassel, Bailleul and Poperinge. Until 5 June 1940, the battalion was given a period of rest to overhaul their equipment and weapons. The German forces launched the second phase of the conquest of France, Fall Rot (Case Red) on 5 June 1940. Following combat at the Avre and at Roye from 7–9 June 1940, the battalion was ordered to Saint-Quentin. The battalion then crossed the Marne and the headed for the Seine which they reached on 14 June 1940. On 14 June, Paris fell. Following the crossing of the Seine, the battalion headed for Dijon. On 16–17 June 1940, Witt's battalion was engaged in combat at the Langres plateau, near Arthonnay, Molesmes and Channes. In this encounter, 30,000 prisoners of war were taken.[5]

On 4 September 1940, Witt was awarded the Knight's Cross of the Iron Cross (Ritterkreuz des Eisernes Kreuzes) as SS-Sturmbannführer and commander of the I./SS-Standarte "Deutschland". Witt was then transferred back to the LSSAH on 16 October 1940. He was tasked with the leadership of LSSAH's III. Bataillon (3rd Battalion). At the time, the battalion was based in Metz, France and was being augmented to a motorized brigade.[5]

In early 1941, LSSAH relocated from Metz to Romania and in March 1941, it moved to Bulgaria. On 26 March 1941, Witt was given command of I. Bataillon of the LSSAH, at the time located in Câmpulung, Romania. With this unit, Witt participated in the Battle of Greece (6–30 April 1941), the Axis invasion of Allied Greece. On 11–12 April 1941, Witt's battalion participated in the assault on the Klidi Pass, sustaining heavy casualties in the attack. On 14 April 1941, the battalion fought against British forces in the Battle of Kleisoura Pass. There, Witt's brother Franz, also a member of I. Bataillon, was killed in action.[6]

War against the Soviet Union

In preparation for Operation Barbarossa, the German invasion of the Soviet Union, the LSSAH was moved to Brünn, present-day Brno in the Czech Republic, for replenishment. As part of Gerd von Rundstedt's, Army Group South, the LSSAH objective was to support the capture of the Ukraine and its capital Kiev.[7] LSSAH was involved in the Battle of Uman and the subsequent capture of Kiev. According to a postwar account of a Waffen-SS journalist, after finding the mutilated bodies of six dead divisional members who had been previously captured and executed in Taganrog, the division murdered 4,000 Soviet prisoners in reprisal. For want of reliable evidence, the allegations remained unproven.[8] 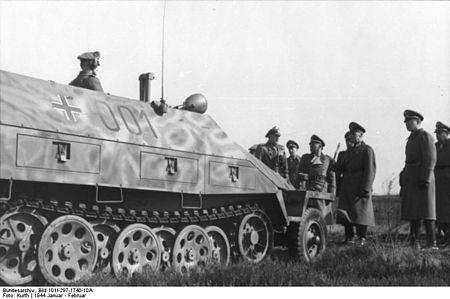 On 1 July 1943, Witt was promoted to SS-Oberführer and was appointed commander of the 12th SS Panzer Division Hitlerjugend, the majority of its enlisted men were drawn from members of the Hitler Youth. His previous command of the SS-Panzergrenadier-Regiment 1 was given to Albert Frey. In the following months, Witt oversaw the formation and training of Hitlerjugend division at Beverloo Camp, Belgium.[9]

In expectation of the Allied invasion, 12th SS Panzer Division Hitlerjugend was ordered to relocate to France in March 1944. On 1 April 1944, elements of the division were responsible for the Ascq massacre in Ascq, France. In command of these elements was SS-Obersturmführer Walter Hauck, at the time a company commander in the Hitlerjugend division.[10]

On 20 April 1944, Witt was promoted to SS-Brigadeführer und Generalmajor of the Waffen-SS.[11] On 6 June 1944, the Western Allies launched the Invasion of Normandy. During the Normandy Campaign, Kurt Meyer, commander of the Hitlerjugend 25th Panzer Grenadier Regiment, used the Ardenne Abbey for his regimental headquarters, as the turret allowed for a clear view of the battlefield.[12] On 7 June, members of the Hitlerjugend division under Kurt Meyer illegally executed Canadian soldiers in what became known as the Ardenne Abbey massacre.[13]

On 14 June 1944, Witt was killed in action by a Royal Navy naval artillery barrage which hit the divisional command post at Venoix. He was initially buried at Venoix and later reinterred at Champigny—Saint-André-de-l'Eure, France.[14]