A front (Russian: фронт, front) is a military formation in some countries. Originating in the Russian Empire, it has been used by the Polish Army, the Red Army and Soviet Army, and by Turkey. It is roughly equivalent to an army group in the military of most other countries. It varies in size but in general contains three to five armies.[1] It should not be confused with the more general usage of military front, describing a geographic area in wartime.

At the end of 1916 Romanian Front was established, which also included remnants of the Romanian army.

In April 1917, Caucasus Front was established by the reorganization of the Caucasus Army.

The Soviet fronts were first raised during the Russian Civil War. They were wartime organizations only, in the peacetime the fronts were normally disbanded and their armies organized back into military districts. Usually a single district formed a single front at the start of the hostilities, or when hostilities were anticipated. Some military districts could not form a front. Fronts were also formed during the Polish-Soviet War of 1920.[citation needed]

An interesting and important distinction between army groups and fronts is that a Soviet front typically had its own army-sized tactical fixed-wing air organization.[2] This air army was directly subordinated to the front commander (typically a ground commander). The entire front might report either to the Stavka or to a theatre of military operations (TVD).

The degree of change in the structure and performance of individual fronts can only be understood when seen in the context of the strategic operations of the Red Army in World War II.

Soviet fronts in the European Theatre during the Second World War from 1941 to 1945: 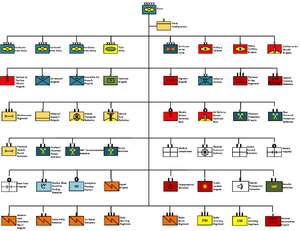 The Soviet Army maintained contingencies for establishing fronts in the event of war. During the Cold War, fronts and their staffs became groups of Soviet forces in the Warsaw Pact organization.[citation needed] The front was to be the highest operational command during wartime. Though there was no front ever established during peace time the basic building blocks were maintained the established Military Districts. A front generally comprised 3-4 Combined Arms Armies and 1-2 Tank Armies though there was no set organization.[5]

A number of fronts were created by the Second Polish Republic from 1918 to 1939, among them being the Polish Southern Front. See pl:Kategoria:Fronty polskie. In addition, the creation of a Polish Front was considered to group the First and Second Armies of the Polish Armed Forces in the East in 1944, and during the Warsaw Pact period, a Polish Front was created, seemingly as a mobilization-only organization.