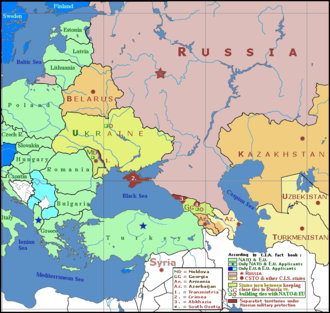 Geopolitics of Eastern Europe, 2014, showing the frozen conflict zones of Transnistria, Crimea, Abkhazia, and South Ossetia (numbered 1–4), as well as Nagorno-Karabakh (shown as darker shaded region within Azerbaijan), Northern Cyprus (lighter region within Cyprus), and Kosovo (beige region within Serbia). Israel and the Palestinian territories also appear on the map.

In international relations, a frozen conflict is a situation in which active armed conflict has been brought to an end, but no peace treaty or other political framework resolves the conflict to the satisfaction of the combatants. Therefore, legally the conflict can start again at any moment, creating an environment of insecurity and instability.

The term has been commonly used for post-Soviet conflicts, but it has also often been applied to other perennial territorial disputes.[1][2][3] The de facto situation that emerges may match the de jure position asserted by one party to the conflict; for example, Russia claims and effectively controls Crimea following the 2014 Crimean crisis despite Ukraine's continuing claim to the region. Alternatively, the de facto situation may not match either side's official claim. The division of Korea is an example of the latter situation: both the Republic of Korea and the Democratic People's Republic of Korea officially assert claims to the entire peninsula; however, there exists a well-defined border between the two countries' areas of control.

Following the breakup of the Soviet Union in 1991, a number of conflicts arose in areas of some of the post-Soviet states, usually where the new international borders did not match the ethnic affiliations of local populations. These conflicts have largely remained "frozen", with disputed areas under the de facto control of entities other than the countries to which they are internationally recognized as belonging, and which still consider those areas to be part of their territory.

Since the ceasefire which ended the Transnistria War (1990–1992), the Russian-influenced breakaway republic of Transnistria has controlled the easternmost strip of the territory of Moldova. The republic is internationally unrecognized, and Moldova continues to claim the territory.

The Nagorno-Karabakh region, an ethnically Armenian enclave within Azerbaijan, has been a source of dispute between Azeris and Armenians for many decades. The Nagorno-Karabakh War was fought as a full-scale conflict in 1991–1994. Since the ceasefire, the Armenian-backed Nagorno-Karabakh Republic has controlled the region and an area adjoining it (giving it a border with Armenia). The Republic remains internationally unrecognized, in spite of efforts to settle its political status. Azerbaijan continues to claim the whole territory as its own, and the Republic in turn lays claim to an area to the north which remains under Azerbaijan's de facto control.

In 2014, Crimea was occupied by the Russian troops without insignia while Ukraine was still recovering from large scale violence in the capital, and soon afterwards was admitted into the Russian Federation. This is widely regarded as an annexation of the peninsula by Russia, and is considered likely to result in another post-Soviet frozen conflict.[4] Fears have been expressed that a similar outcome will result from the 2014–2015 War in Donbass, where the unrecognized Donetsk People's Republic and Lugansk People's Republic have taken de facto control of areas in the Donbass region in eastern Ukraine.

India and Pakistan have fought at least three wars over the disputed region of Kashmir in 1947, 1965, and 1999. India claims the entire area of the former princely state of Kashmir and Jammu, of which it administers approximately 43%. Its claims are contested by Pakistan, which controls approximately 37% of the region.[5][6] The remainder is controlled by China, with which India is also in dispute.

The conflict between mainland China and Taiwan remains frozen since 1949. The People's Republic of China considers Taiwan to be part of its territory, while the island remains under the de facto independent administration of what is officially called the Republic of China.

The division of Korea remains frozen since 1953, when a ceasefire ended the Korean War. Both North Korea and South Korea governments claim the entire peninsula, while de facto control is divided along the military demarcation line in the Korean Demilitarized Zone.

The Arab–Israeli conflict is a perennial conflict between Israel and its Arab neighbours, including the Palestinian territories. Israel refuses to recognize Palestinian statehood (which generally remains unrecognized internationally), while some Arab groups refuse to accept the existence of Israel. Israel has de facto control of East Jerusalem and claims it as its integral territory, although it is not internationally recognized as such. Similarly most of the Golan Heights are currently under de facto Israeli control and civil administration, whereas Syria rejects that claim.

The Cyprus dispute has been frozen since 1974. The northern part of Cyprus is under the de facto control of the Turkish Republic of Northern Cyprus, but this is not recognized internationally except by Turkey.

Others in Europe and Africa

The dispute over the status of Kosovo remains frozen since the end of the Kosovo War, fought in 1998–1999 between Yugoslav forces (FR Yugoslavia) and the ethnically Albanian Kosovo Liberation Army. The Kosovo region has been administered independently since the war, and the Republic of Kosovo declared its independence from Serbia in 2008, but it is not recognized by all countries worldwide, and Serbia still considers Kosovo part of its territory. In addition, a predominately-Serbian section of Kosovo, North Kosovo, has itself broken from the Republic of Kosovo and is aligned with Serbia.

The Western Sahara conflict has been largely frozen since a ceasefire in 1991, although various disturbances have broken out since then. Control of the territory of Western Sahara remains divided between Morocco and the Polisario Front.