From Infogalactic: the planetary knowledge core
Jump to: navigation, search
For other uses, see Fruit (disambiguation). 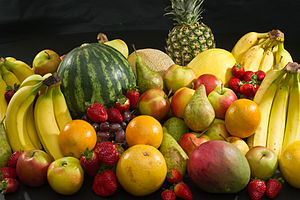 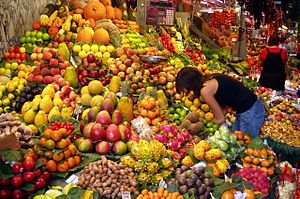 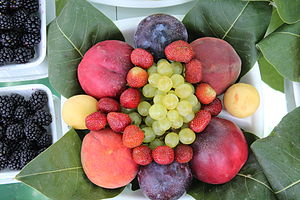 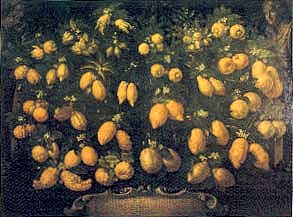 In botany, a fruit is the seed-bearing structure in flowering plants (also known as angiosperms) formed from the ovary after flowering.

Fruits are the means by which angiosperms disseminate seeds. Edible fruits, in particular, have propagated with the movements of humans and animals in a symbiotic relationship as a means for seed dispersal and nutrition; in fact, humans and many animals have become dependent on fruits as a source of food.[1] Accordingly, fruits account for a substantial fraction of the world's agricultural output, and some (such as the apple and the pomegranate) have acquired extensive cultural and symbolic meanings.

In common language usage, "fruit" normally means the fleshy seed-associated structures of a plant that are sweet or sour, and edible in the raw state, such as apples, bananas, grapes, lemons, oranges, and strawberries. On the other hand, in botanical usage, "fruit" includes many structures that are not commonly called "fruits", such as bean pods, corn kernels, tomatoes, and wheat grains.[2][3] The section of a fungus that produces spores is also called a fruiting body.[4] 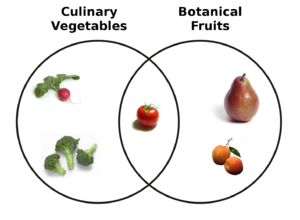 Many common terms for seeds and fruit do not correspond to the botanical classifications. In culinary terminology, a fruit is usually any sweet-tasting plant part, especially a botanical fruit; a nut is any hard, oily, and shelled plant product; and a vegetable is any savory or less sweet plant product.[5] However, in botany, a fruit is the ripened ovary or carpel that contains seeds, a nut is a type of fruit and not a seed, and a seed is a ripened ovule.[6]

Examples of culinary "vegetables" and nuts that are botanically fruit include corn, cucurbits (e.g., cucumber, pumpkin, and squash), eggplant, legumes (beans, peanuts, and peas), sweet pepper, and tomato. In addition, some spices, such as allspice and chili pepper, are fruits, botanically speaking.[6] In contrast, rhubarb is often referred to as a fruit, because it is used to make sweet desserts such as pies, though only the petiole (leaf stalk) of the rhubarb plant is edible,[7] and edible gymnosperm seeds are often given fruit names, e.g., ginkgo nuts and pine nuts.

Botanically, a cereal grain, such as corn, rice, or wheat, is also a kind of fruit, termed a caryopsis. However, the fruit wall is very thin and is fused to the seed coat, so almost all of the edible grain is actually a seed.[8]

The outer, often edible layer, is the pericarp, formed from the ovary and surrounding the seeds, although in some species other tissues contribute to or form the edible portion. The pericarp may be described in three layers from outer to inner, the epicarp, mesocarp and endocarp.

Fruit that bears a prominent pointed terminal projection is said to be beaked.[9] 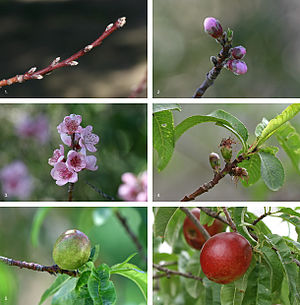 The development sequence of a typical drupe, the nectarine (Prunus persica) over a 7.5 month period, from bud formation in early winter to fruit ripening in midsummer (see image page for further information)

A fruit results from maturation of one or more flowers, and the gynoecium of the flower(s) forms all or part of the fruit.[10]

Inside the ovary/ovaries are one or more ovules where the megagametophyte contains the egg cell.[11] After double fertilization, these ovules will become seeds. The ovules are fertilized in a process that starts with pollination, which involves the movement of pollen from the stamens to the stigma of flowers. After pollination, a tube grows from the pollen through the stigma into the ovary to the ovule and two sperm are transferred from the pollen to the megagametophyte. Within the megagametophyte one of the two sperm unites with the egg, forming a zygote, and the second sperm enters the central cell forming the endosperm mother cell, which completes the double fertilization process.[12][13] Later the zygote will give rise to the embryo of the seed, and the endosperm mother cell will give rise to endosperm, a nutritive tissue used by the embryo.

As the ovules develop into seeds, the ovary begins to ripen and the ovary wall, the pericarp, may become fleshy (as in berries or drupes), or form a hard outer covering (as in nuts). In some multiseeded fruits, the extent to which the flesh develops is proportional to the number of fertilized ovules.[14] The pericarp is often differentiated into two or three distinct layers called the exocarp (outer layer, also called epicarp), mesocarp (middle layer), and endocarp (inner layer). In some fruits, especially simple fruits derived from an inferior ovary, other parts of the flower (such as the floral tube, including the petals, sepals, and stamens), fuse with the ovary and ripen with it. In other cases, the sepals, petals and/or stamens and style of the flower fall off. When such other floral parts are a significant part of the fruit, it is called an accessory fruit. Since other parts of the flower may contribute to the structure of the fruit, it is important to study flower structure to understand how a particular fruit forms.[3]

There are three general modes of fruit development:

Plant scientists have grouped fruits into three main groups, simple fruits, aggregate fruits, and composite or multiple fruits.[15] The groupings are not evolutionarily relevant, since many diverse plant taxa may be in the same group, but reflect how the flower organs are arranged and how the fruits develop. 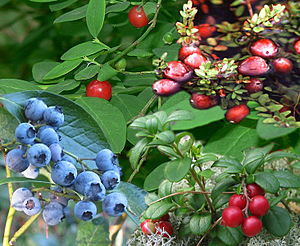 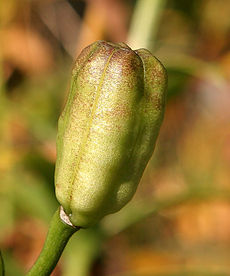 Fruits in which part or all of the pericarp (fruit wall) is fleshy at maturity are simple fleshy fruits. Types of simple, fleshy, fruits (with examples) include: 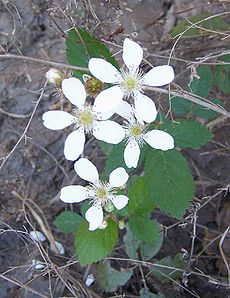 Dewberry flowers. Note the multiple pistils, each of which will produce a drupelet. Each flower will become a blackberry-like aggregate fruit.

An aggregate fruit, or etaerio, develops from a single flower with numerous simple pistils.[17]

The pome fruits of the family Rosaceae, (including apples, pears, rosehips, and saskatoon berry) are a syncarpous fleshy fruit, a simple fruit, developing from a half-inferior ovary.[18]

Schizocarp fruits form from a syncarpous ovary and do not really dehisce, but rather split into segments with one or more seeds; they include a number of different forms from a wide range of families.[15] Carrot seed is an example.

The raspberry, whose pistils are termed drupelets because each is like a small drupe attached to the receptacle. In some bramble fruits (such as blackberry) the receptacle is elongated and part of the ripe fruit, making the blackberry an aggregate-accessory fruit.[21] The strawberry is also an aggregate-accessory fruit, only one in which the seeds are contained in achenes.[22] In all these examples, the fruit develops from a single flower with numerous pistils.

A multiple fruit is one formed from a cluster of flowers (called an inflorescence). Each flower produces a fruit, but these mature into a single mass.[23] Examples are the pineapple, fig, mulberry, osage-orange, and breadfruit. 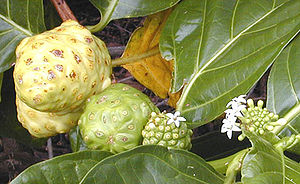 In some plants, such as this noni, flowers are produced regularly along the stem and it is possible to see together examples of flowering, fruit development, and fruit ripening.

In the photograph on the right, stages of flowering and fruit development in the noni or Indian mulberry (Morinda citrifolia) can be observed on a single branch. First an inflorescence of white flowers called a head is produced. After fertilization, each flower develops into a drupe, and as the drupes expand, they become connate (merge) into a multiple fleshy fruit called a syncarp.

Berries are another type of fleshy fruit; they are simple fruit created from a single ovary. The ovary may be compound, with several carpels. Types include (examples follow in the table below): 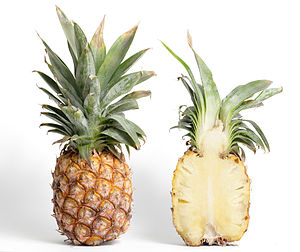 The fruit of a pineapple includes tissue from the sepals as well as the pistils of many flowers. It is an accessory fruit and a multiple fruit.
Main article: Accessory fruit 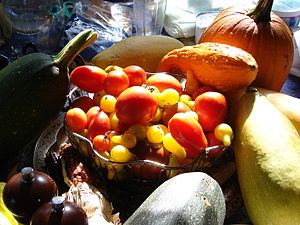 An arrangement of fruits commonly thought of as vegetables, including tomatoes and various squash

Seedlessness is an important feature of some fruits of commerce. Commercial cultivars of bananas and pineapples are examples of seedless fruits. Some cultivars of citrus fruits (especially grapefruit, mandarin oranges, navel oranges), satsumas, table grapes, and watermelons are valued for their seedlessness. In some species, seedlessness is the result of parthenocarpy, where fruits set without fertilization. Parthenocarpic fruit set may or may not require pollination, but most seedless citrus fruits require a stimulus from pollination to produce fruit.

Seedless bananas and grapes are triploids, and seedlessness results from the abortion of the embryonic plant that is produced by fertilization, a phenomenon known as stenospermocarpy, which requires normal pollination and fertilization.[24]

Variations in fruit structures largely depend on their seeds' mode of dispersal. This dispersal can be achieved by animals, explosive dehiscence, water, or wind.[25] 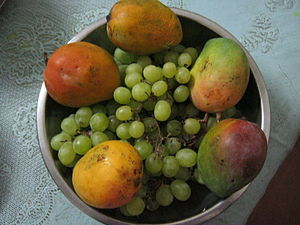 Some fruits have coats covered with spikes or hooked burrs, either to prevent themselves from being eaten by animals, or to stick to the feathers, hairs, or legs of animals, using them as dispersal agents. Examples include cocklebur and unicorn plant.[26][27]

The sweet flesh of many fruits is "deliberately" appealing to animals, so that the seeds held within are eaten and "unwittingly" carried away and deposited (i.e., defecated) at a distance from the parent. Likewise, the nutritious, oily kernels of nuts are appealing to rodents (such as squirrels), which hoard them in the soil to avoid starving during the winter, thus giving those seeds that remain uneaten the chance to germinate and grow into a new plant away from their parent.[6]

Other fruits are elongated and flattened out naturally, and so become thin, like wings or helicopter blades, e.g., elm, maple, and tuliptree. This is an evolutionary mechanism to increase dispersal distance away from the parent, via wind. Other wind-dispersed fruit have tiny "parachutes", e.g., dandelion, milkweed, salsify.[25]

Coconut fruits can float thousands of miles in the ocean to spread seeds. Some other fruits that can disperse via water are nipa palm and screw pine.[25] 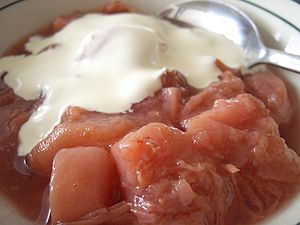 Nectarines are one of many fruits that can be easily stewed. 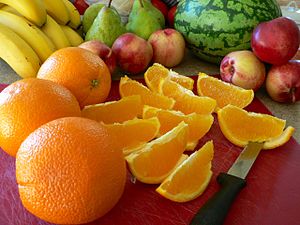 Many hundreds of fruits, including fleshy fruits (like apple, kiwifruit, mango, peach, pear, and watermelon) are commercially valuable as human food, eaten both fresh and as jams, marmalade and other preserves. Fruits are also used in manufactured foods (e.g., cakes, cookies, ice cream, muffins, or yogurt) or beverages, such as fruit juices (e.g., apple juice, grape juice, or orange juice) or alcoholic beverages (e.g., brandy, fruit beer, or wine).[29] Fruits are also used for gift giving, e.g., in the form of Fruit Baskets and Fruit Bouquets. 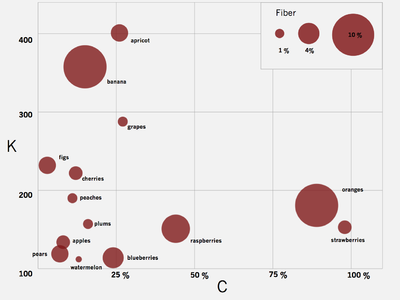 Each point refers to a 100 g serving of the fresh fruit, the daily recommended allowance of vitamin C is on the X axis and mg of Potassium (K) on the Y (offset by 100 mg which every fruit has) and the size of the disk represents amount of fiber (key in upper right). Watermelon, which has almost no fiber, and low levels of vitamin C and potassium, comes in last place.

Because fruits have been such a major part of the human diet, various cultures have developed many different uses for fruits they do not depend on for food. For example:

For food safety, the CDC recommends proper fruit handling and preparation to reduce the risk of food contamination and foodborne illness. Fresh fruits and vegetables should be carefully selected; at the store, they should not be damaged or bruised; and precut pieces should be refrigerated or surrounded by ice.

All fruits and vegetables should be rinsed before eating. This recommendation also applies to produce with rinds or skins that are not eaten. It should be done just before preparing or eating to avoid premature spoilage.

All cut, peeled, or cooked fruits and vegetables should be refrigerated within two hours. After a certain time, harmful bacteria may grow on them and increase the risk of foodborne illness.[42]

Fruit allergies make up about 10 percent of all food related allergies.[43][44]

All fruits benefit from proper post harvest care, and in many fruits, the plant hormone ethylene causes ripening. Therefore, maintaining most fruits in an efficient cold chain is optimal for post harvest storage, with the aim of extending and ensuring shelf life.[45]