Mher Mkrtchyan (Armenian: Մհեր Մկրտչյան), better known by his stage name Frunzik (Armenian: Ֆրունզիկ; Russian: Фрунзик; 4 July 1930 – 29 December 1993), was a Soviet Armenian actor. He is widely considered as one of the greatest Armenian actors of the Soviet period.[1]

He was born in Leninakan (now Gyumri) Armenian SSR. He studied in Leninakan Art College and Theatre Studio, then graduated from the Acting Department of Yerevan Institute of Fine Arts and Theatre. Beginning from 1953, he performed in the Sundukyan Drama Theatre of Yerevan. He also directed many successful productions, the best of which was Maxim Gorky's "The Lower Depths". His cinema career began in 1955.

Even though he was known as a comedy actor, Mkrtchyan's personal life was filled with tragedy. His first wife, Donara Mkrtchyan, became mentally ill and was sent to a mental institution for the rest of her life. Mkrtchyan became a single parent of two young children. His son inherited his mother’s mental illness. His daughter was killed in a car accident.

When he died in 1993 thousands of people attended the funeral of their beloved actor. Frunzik Mkrtchyan is buried at Komitas Pantheon which is located in the city center of Yerevan. [2] 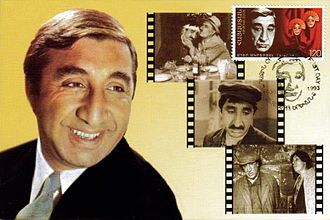 2013 Armenian post card dedicated to Mkrtchyan and his roles