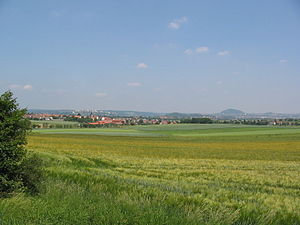 Countryside in the Fulda district, looking east toward the town of Fulda.